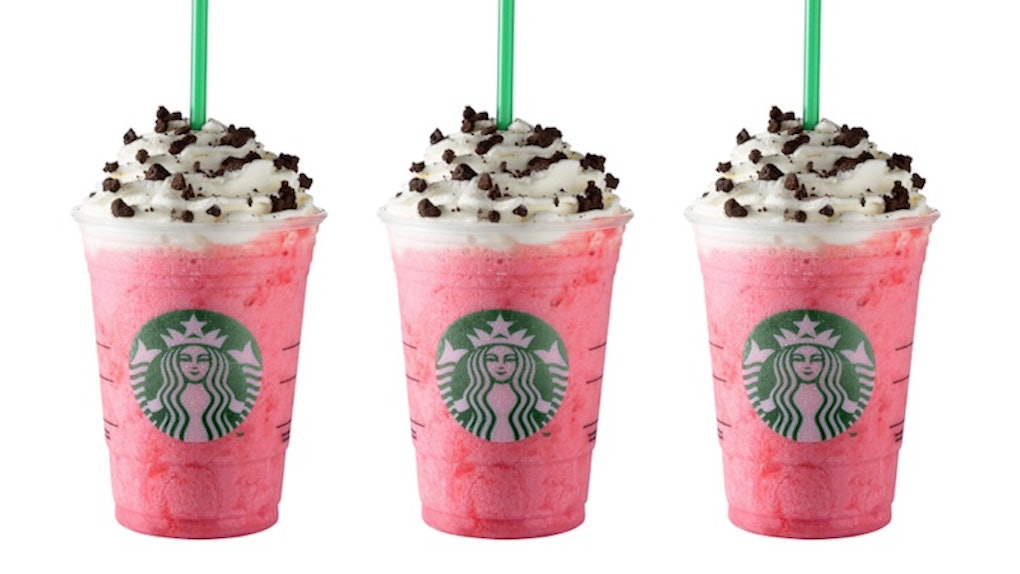 Do you remember when unicorns invaded Starbucks Frappuccinos across the nation with eye-catching colors and fruity flavors? I definitely do. It was a magical time, but it looks like a different creature is diving into Starbucks drinks across the globe. I'm talking about flamingos, because Starbucks' new Pink Flamingo Frappuccino is coming. Yes, the brightly-colored frozen beverage is downright gorgeous, and it might give your beloved Unicorn Frappuccino a run for its money. Get ready for pink Instagram grids, because the flamingos are coming.

Starbucks announced its upcoming Pink Flamingo Frappuccino on Monday, April 8, but there's *one* thing that you should know before you get too excited. According to the company, the new blended beverage will only be available in Latin America for a limited time (sigh). If you're visiting Central America, Bolivia, Peru, Chili, or Colombia between April 10 and April 14, you'll be able to give it a try! However, you should still keep in mind that it'll only be available while supplies last.

If you don't have any plans on being in Latin America this April, then you'll have to admire the Pink Flamingo Frappuccino from afar. Thankfully, it's super Insta-worthy — so I'm sure tons of lucky customers will be taking photos of it.

If you are planning on trying the Pink Flamingo Frappuccino, then you're probably curious about what it tastes like. I mean, its pink appearance could mean a ton of different things, but Starbucks made its flavor clear. According to the coffee haven, the Pink Flamingo Frappuccino is strawberry-flavored (hence its pink hue). With that being said, it's the perfect springtime drink for anyone craving something sweet and fruity.

However, strawberry isn't the only flavor you'll taste while sipping on the drink. Per Starbucks, the Pink Flamingo Frappuccino is topped with whipped cream and cookie pieces, which means you'll probably get a chocolatey taste along with its fruity flavor (if you mix the cookie pieces into your drink, that is).

Sure, I haven't tried it yet — but based off of those ingredients, it sounds like the drink is reminiscent of a chocolate-covered strawberry. If that's the case, I'm sure I'd love it.

Again, if you're taking a trip to Latin America in April, be sure to try the Pink Flamingo Frappuccino while it's available. While you're at it, don't forget to post a picture of your drink on Instagram. You never know, maybe these pink frozen drinks will totally outshine the Unicorn Frappuccinos that went viral in 2017. (I think there's enough room on the 'Gram for flamingos and unicorns, though.)

Believe it or not, customers in Latin America aren't the only lucky ones who've been granted new Starbucks drinks recently. According to the coffee company, Starbucks Asia also added two new frozen beverages to its menu. Those include the Mixed Berry Frappuccino with Pomegranate Pearls, and the Yuzu Honey Jelly Yogurt Frappuccino. Both Frappuccinos will also be available in April while supplies last, so get them while you can.

If you're not planning on visiting Latin America or Asia this spring, don't fret. You can still order a Cadbury Creme Egg Frappuccino off of Starbucks' secret menu and get in on the springtime flavors.