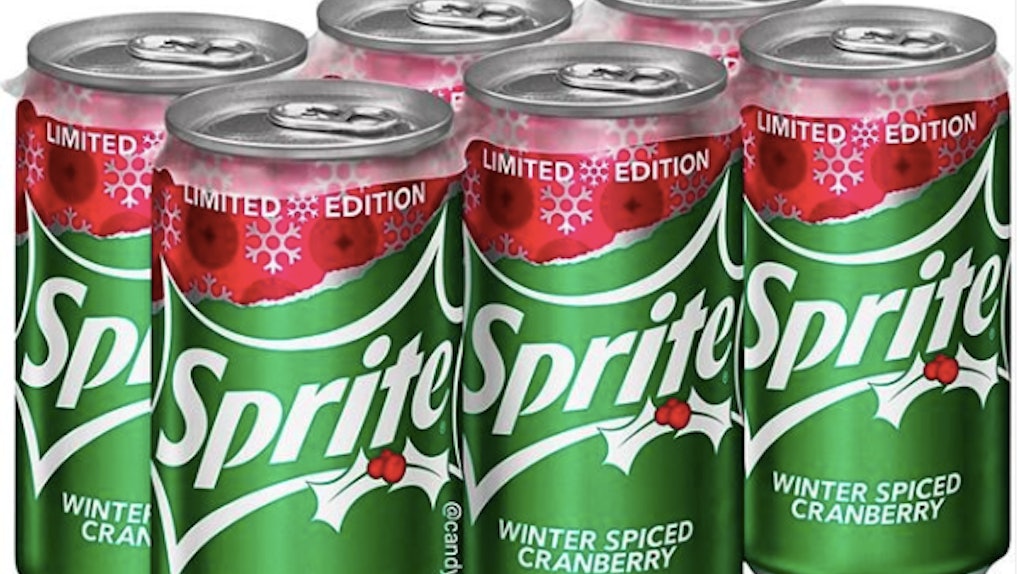 There is no denying that champagne usually tends to be the star of bubbly holiday beverages. However, there's about to be a new festive carbonated sip that I can already tell will be my mixer of choice this holiday season. If you haven't already heard about Sprite's Winter Spiced Cranberry soda, it's about to be the perfect addition to any and all of your winter solstice parties and New Year's Eve bashes during the most wonderful time of the year.

In case you haven't already heard, The Coca-Cola Company is rolling out not one — but two new flavors this fall, and one of them happens to be Sprite Winter Cranberry Spice. A statement from the company to Elite Daily reads, "You all are beating us to the punch! We have not issued an official press release (that is coming soon), but we are excited to confirm that the holidays will be kicking off early when Coca-Cola Cinnamon and Sprite Winter Spiced Cranberry hit shelves nationwide on Sept. 30."

According to People, Winter Spiced Cranberry is a totally original flavor (seriously, it's never been done before!), it's going to be limited edition, and lucky for you, it will be out in just a few short weeks. As of right now, not too much is known about how Sprite Winter Spiced Cranberry tastes, per se. However, Delish speculates that it could be a great addition to Holiday Punch, or fantastic on its own. Since the original Sprite Cranberry was popular, per Food & Wine, it sounds like this flavor could be a total hit. Foodie Instagram account @CandyHunting also made a post about it, saying, "Keeping the winter theme going, new Winter Spiced Cranberry Sprite will be out for the holiday season!" So that's how you know it's bound to be good.

It's just a few short weeks until the cans will be available for customers to try on Sept. 30. And believe me — you will definitely want to purchase a few cases as soon as you possibly can — it's only going to be available through the last day of the year, Dec. 31, or while supplies last. My advice is to stock up long before that holiday bash of yours. It sounds like Sprite Winter Cranberry Spice is going to be a hugely popular sip this holiday season.

There's also another new Coca-Cola flavor coming this holiday season, known as Coca-Cola Cinnamon. It's reportedly going to be a spicy spin on the classic Coke flavor, which apparently debuted as a Zero Coke variety in the UK during winter 2018. @CandyHunting also shared the new product in an IG post, showing off the can design, reporting that it evokes notes of citrus and brown spice. Sounds good to me.

Whether you're looking for a new non-alcoholic drink or if you're simply looking for a holiday party mixer, Sprite Winter Spice Cranberry is totally about to win me over. The citrusy flavors of Sprite mixed with cranberry and winter spice are bound to make for a delicious sip, and I'm seriously excited to try it. Luckily, its grocery store debut is just a few short weeks away. Cheers to that!