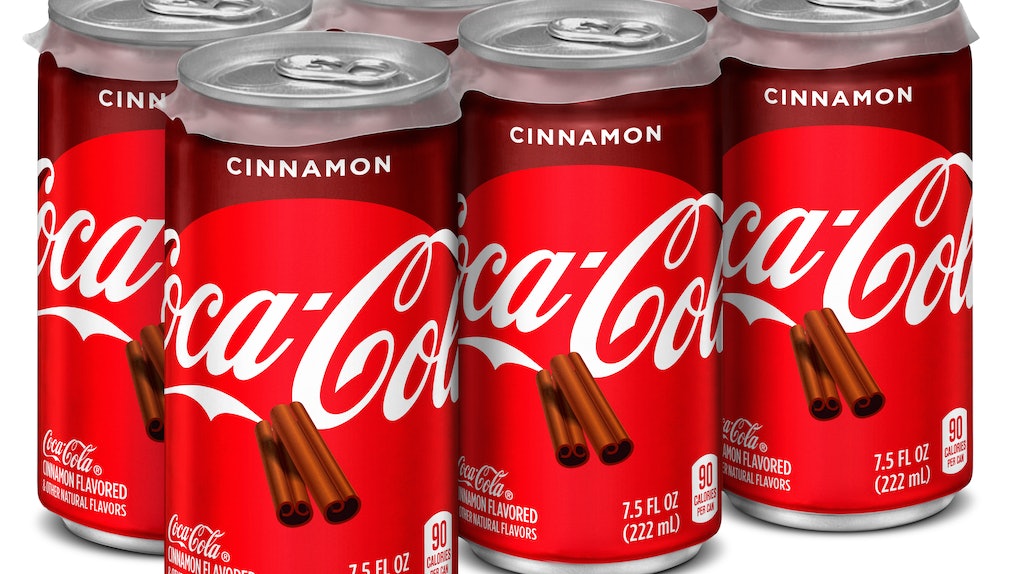 Coca-Cola is definitely a go-to soft drink. The popular soda is easy to take on the go or with a meal — it's refreshing in so many ways. If you're a cola aficionado, you'll want listen up. Your favorite drink is about to get a new spin that will make it seasonally appropriate to enjoy while you're picking apples and even decorating for the holidays this year. Why? Well, Coca Cola Cinnamon is coming for fall 2019, so get ready for an ice-cold cinnamon-flavored Coca-Cola.

According to Delish, Coca Cola Cinnamon is a cinnamon spin on the classic Coke flavor. The food news Instagram account @CandyHunting shared the big news with a post featuring the can design of the cinnamon-flavored cola. The post reads:

In an email to Elite Daily, a Coca-Cola representative confirmed Coca-Cola Cinnamon will be hitting shelves nationwide on Sept. 30. In press material sent to Elite Daily, it appears the flavor will be available in a six-pack of 7.5-ounce cans, and it's slated to disappear on Dec. 31, 2019, so mark your calendars and get ready to shop.

Now that the cat is out of the bag, fans are already preparing to stock up on the cinnamon-flavored drink. On @CandyHunting's Instagram post, @michelerumpf wrote, "I love cinnamon so I'll try it," while @xokelliscott replied, "Wow!! Interesting! Seems like an awesome Christmas Cola! Def will try!" Others are celebrating the news by conjuring up innovative ways to use the Cinnamon Coca-Cola for their holiday party menu. Instagram user @lleogurl comments, "Could make a good float! Any brands make an eggnog ice cream?" The potential combinations for Cocoa-Cola Cinnamon are endless, whether it's replacing your tried-and-true pumpkin spice latte once in a while or simply making it in an addition to a float or a cocktail.

It's not surprising that Coca-Cola Cinnamon will finally hit shelves in the United States, given the popularity of the flavor in the UK last year. Coca-Cola introduced the cinnamon flavor as a Coke Zero flavor in October 2018. In an Oct. 8 press release, Marketing Manager at Coca-Cola Great Britain, Alec Mellor, explained: "For a limited time only, we are excited to announce the launch of Coca-Cola zero sugar Cinnamon, that we hope our current fans and those looking to try a new flavour will love. It's a drink full of festive flavour and no sugar, perfect for the lead up to Christmas." According to the press release, the new product was available in 500-milliliter and 1.25-liter bottles and was only available until the end of the year.

@Bren_Doughty's tweet about Cinnamon Coke Zero gets me in a proper holiday spirit: "It's like Christmas in a bottle."

@Susan_Brown3 highlighted the upgrade of cinnamon to the classic Coke flavor, tweeting: "That amazing Coke Zero flavour we all know and love - with added cinnamon. Love this festive edition! Holidays are coming!"

If all the positive reviews from UK Cola fans are any indication of how good the drink will taste this season, I'm prepared for a crowd pleaser. A representative from Coca-Cola also shares that there will be another festive drink to look forward to on Sept. 30: Sprite Winter Spiced Cranberry. All this news of special-edition pop is seriously spicing up my fall and holiday preparations.