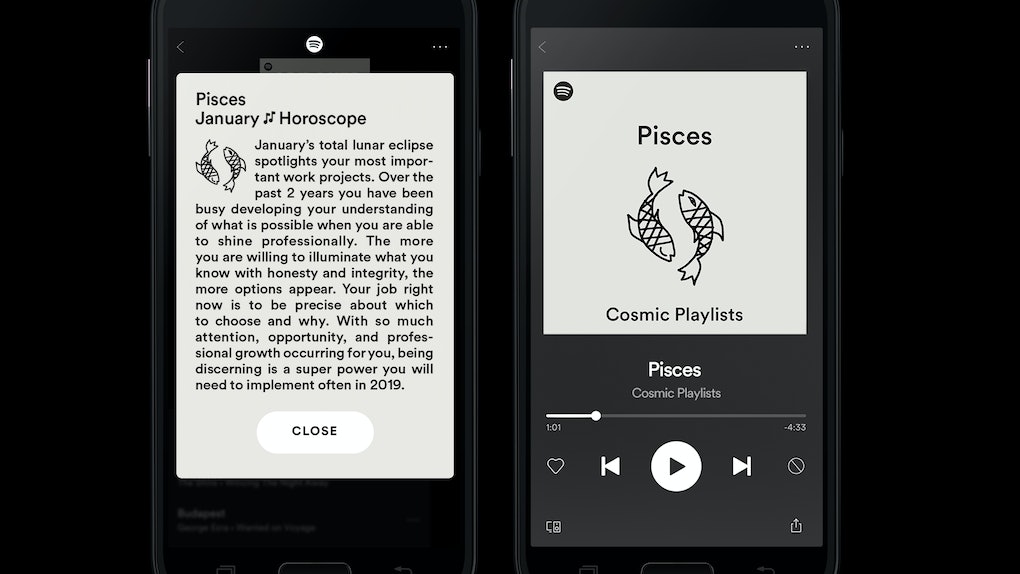 Are you immediately transported back in time when you hear a certain song? It's as though that song was playing in the background of whatever you were going through during that time, instantly interweaving its melody with your memory. These songs are collectively referred to as "the soundtrack to your life", and listening to them always reminds you of everything that you've been through. Once you immerse yourself in Spotify's new cosmic playlists, this phenomenon will take on a meaning of its own.

These playlists were constructed by famed astrologer Chani Nicholas and they're designed with your zodiac sign in mind, according to a Jan. 17 post in the Spotify Newsroom. The music is chosen to accompany a horoscope written by Nicholas in a way that helps you make even further sense of whatever the stars have in store for you. Updated every month, these playlists capture the main themes and situations associated with whatever your zodiac sign may be currently experiencing. With a dose of musical magic, you can get through anything. You should be able to find your own playlist as of Jan. 17, but if you don't see it right away, you can try updating and restarting the app.

Personally, I find that words aren't always enough when I'm trying to clarify my emotional and mental state. However, music requires no language. It taps into thoughts and feelings that there are no words for, and oftentimes, music is the only thing that makes me feel understood.

Clearly, Nicholas understands music's ability to set the mood in a way that nothing else can, as she so perfectly describes in an interview conducted by Spotify:

When a song resonates with you, it might feel really personal, like it’s speaking about your own experience. But it’s also speaking to a huge, broad audience. When there’s something collectively going on where a song resonates for a lot of people, it’s the same way that a horoscope will speak to the archetypal themes of the moment.

In her interview, she goes on to mention that, for example, Leo's are having a major moment in astrology. Due to a total lunar eclipse in Leo that took place from Jan. 20 to Jan. 21, this zodiac sign is undergoing an immense transformation in so many ways. The lunar eclipse took place in Leo's first house of the self, which has everything to do with one's identity. Since Leo's playlist including songs such as "i" by Kendrick Lamar, "Beat Of My Drum" by POWERS, and "Shouldn't Be Sorry" by Cards and Sita, the musical effect is to let a Leo know that they have every reason to feel proud of who they are and how far they've come.

Even though Leo may have stolen the astrological show, let's not forget that it's still Aquarius season. Because this lunar eclipse zones in on an Aquarian's seventh house of partnerships, it's clear that they've got love on their mind, and the Aquarius playlist expresses that with songs like "Thinkin Bout You" by Frank Ocean and "Truly Madly Deeply" by Yoke Lore. However, an Aquarius is still feeling themselves and looking hard in the mirror (their season lasts from Jan. 20 to Feb. 18, after all), so tracks like "Aquarius" by Tinashe and "It All Feels Right" by Washed Out couldn't be any more appropriate.

While you could simply switch on your zodiac sign's playlist, go for a drive, and let the magic surround you, Nicholas has some advice for how you should use the playlists. In a tweet posted on Saturday Jan. 19, she let you know that the playlists were made "so that you could dance to it under the full moon light. Clothing optional".

You heard it straight from the cosmic source, my friends.