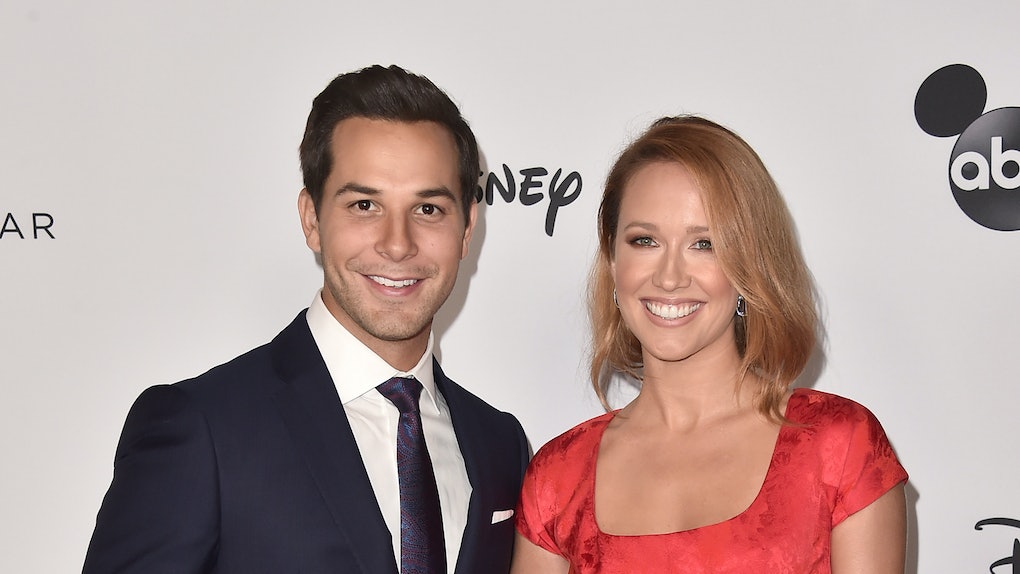 It’s always sad to see a celebrity couple that seemed so happy and so right for one another suddenly split. Case in point: Skylar Astin and Anna Camp announcing they were going their separate ways. The Pitch Perfect costars seemed to be just that: Pitch perfect together. So when the couple announced they were calling it quits, it came as a shock to fans. While neither has talked about what went awry in the relationship yet, by taking a look at Skylar Astin and Anna Camp’s astrological compatibility, we can make a guess at what might have happened in their dynamic that led to their breakup.

Camp and Astin first got together back in 2013 on the set of Pitch Perfect and were married three years later. It seemed to be wedded bliss. In fact, back in August 2017, Camp told PEOPLE her relationship was better than ever. "We fall in love with each other more and more every day we’ve been together. And I know it sounds, like, gross, everyone’s probably gonna throw up about that, but it’s actually really true," Camp said. So when, in a joint statement to PEOPLE on April 19, the former couple confirmed they had split, it seemed to come out of nowhere. Shortly after the announcement, E! News reported that Camp had officially filed for a divorce. The couple also unfollowed each other on Instagram, where each have since posted photos without their wedding rings.

What could have possibly happened? While we don't have any direct insight, we can surmise what might have gone wrong based on the couple’s astrological compatibility. Camp was born September 27 under the sign of Libra, and Astin's birthday is September 23, which makes him Libra as well. When Libra and Libra come together, it can be a harmonious union based on idealism and shared values — but it can also be a bit of a fragile balancing act.

Libra relationships struggle when there's a lack of balance.

For Libra, all areas of their life, especially in their relationships, need balance. So, typically, this sign is drawn to people who are their opposites. That way, they can balance one another’s strengths and weaknesses, and in doing so, bring out the best in one another. This is totally possible in a Libra/Libra couple if they are different enough. However, if they are too similar, the dynamic gets out of balance and neither of them is able to right it. It's rare for a couple to have soo much in common that it's actually a detriment to the relationship, but it happens.

The potential for trouble in the bedroom.

Being ruled by Venus means that Libra is very sensual and connected to their heart. However, they can also be a bit passive when it comes to taking initiative in the bedroom. They need a partner who is happy being the driving force. Otherwise, after the heat of the honeymoon phase wears off, the passion can die a slow and awkward death, as both Libras wait for the other to take the initiative and get the spark going again in the bedroom.

Libra’s can avoid conflict too often.

Conflict is really uncomfortable for Libras, so they avoid it whenever possible. They tend to hide their emotions away in order to keep the peace. However, over time, as their needs continue to not be met and small slights grow and spread, so too does the resentment that creates tension and distance between partners. This is another instance where Libra needs a more intuitive partner, or someone who doesn’t fear conflict and will force issues to the surface to be resolved. Otherwise, the disconnect will slowly grow beneath the surface, and before you know it, the distance between partners is too far to bridge.

Where Libra and Libra relationships struggle most is around issues of trust. Any small incident that erodes their trust can be devastating, because it's hard for them to come back from it. In this kind of relationship, both partners are very idealistic and, as such, enter the relationship wearing rose-colored glasses. However, the smallest thing can shatter that illusion, and has the potential to erode the connection slowly, then all at once.

While we won't know exactly what happened between Camp and Astin until they are ready to share that info, if they are anything like the typical Libra/Libra couple, it could simply have been a case of having too much in common. Either way, it's still sad to see two delightful and seemingly in love people go their separate ways. I guess now we can just hope they find the people they were truly meant to be with, who give them just the right balance they need in a forever partner.