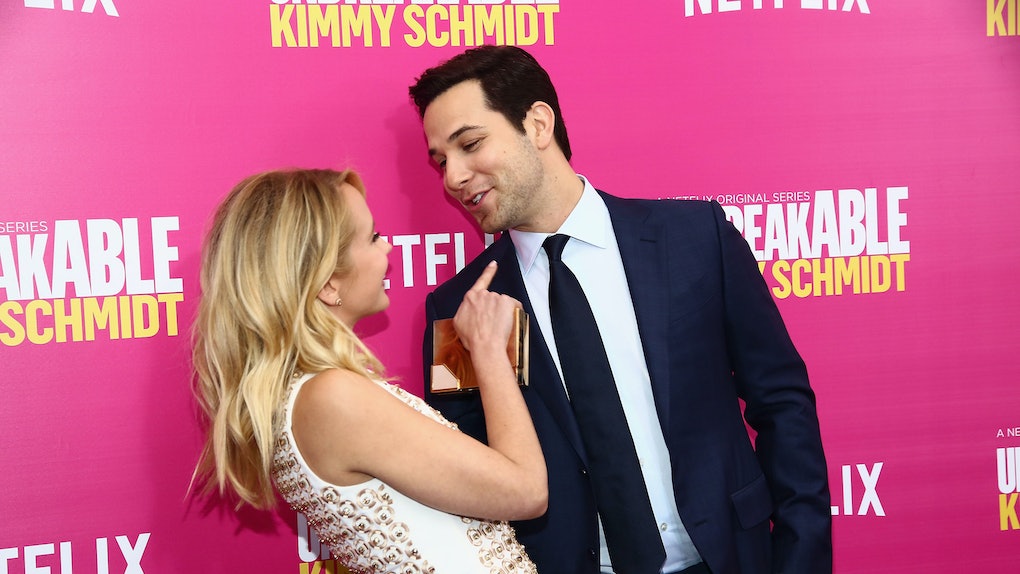 Pitch Perfect fans, grab a couple of tissues and brace yourself, incoming: Anna Camp and Skylar Astin are separating. In a joint statement to People, Camp and Astin said, "We can confirm that we have decided to separate, and this decision was made mutually and amicably. We kindly ask for privacy as we navigate this transition.”

Additionally, a source told People that Astin has "stopped wearing his ring and has started talking about the split with friends." And if shedding a wedding ring wasn't enough, Camp and Astin have unfollowed each other on Instagram. As you very well know, unfollowing your ex on social media is a move that, in 2019, speaks even more clearly than gathering up your ex's belongings and promptly shipping them back.

Camp and Astin joined that golden group of TV or film co-stars who ended up dating IRL when they got together in 2013, after starring together in the first Pitch Perfect film. Camp and Astin tied the knot in 2016, complete with dreamy ceremony and pasta-filled Italian honeymoon.

Back in August 2017, Camp had told People that she and Astin were more in love than ever:

We fall in love with each other more and more every day we’ve been together. And I know it sounds, like, gross, everyone’s probably gonna throw up about that, but it’s actually really true.

Camp has held down roles in Good Girls Revolt, a TV period drama about working women in the 1950s. She also had a stint on The Unbreakable Kimmy Schmidt, voiced a princess on kids' show Sofia the First, and was in comedy The Wedding Year. She also has six films slated to come out in 2020 and beyond. Astin had a role in teen comedy-drama Speech & Debate. He also secured recurring roles on political comedy Graves, Netflix kids' show Trolls: The Beat Goes On!, and the CW's Crazy Ex-Girlfriend. Astin is currently filming for Zoey's Extraordinary Playlist, a TV musical.

There's also a Pitch Perfect 4 possibly in development. In October 2018, Camp and Astin's Pitch Perfect co-star Rebel Wilson coyly told Vanity Fair, "There’s some things in the works. I’m sure Universal is going to hate me for saying this. All us Bellas love each other. We just want to work with each other. The girls are just awesome.” Wilson's statement came shortly after Wilson, Camp, Brittany Snow, and Chrissie Fit posed for a selfie at Camp and Astin's joint birthday party. Each of the ladies held up four fingers.

Inviting all your co-stars to a joint birthday between you and your lover, who was in the same film, is truly the upside to dating someone from work. You had lovely quality time with bae built into your job, you've got a bunch of the same friends, and you all share wonderful memories you can relish in for years to come. The downside is, unfortunately, moments like this one where you go your separate ways.

Whatever transpired between those rosy moments between Astin and Camp and now, hopefully their split was for the best. In the mean time, the Pitch Perfect fandom would best just scroll back through Camp and Astin's feeds, and focus on the good times had by this gorgeous couple.