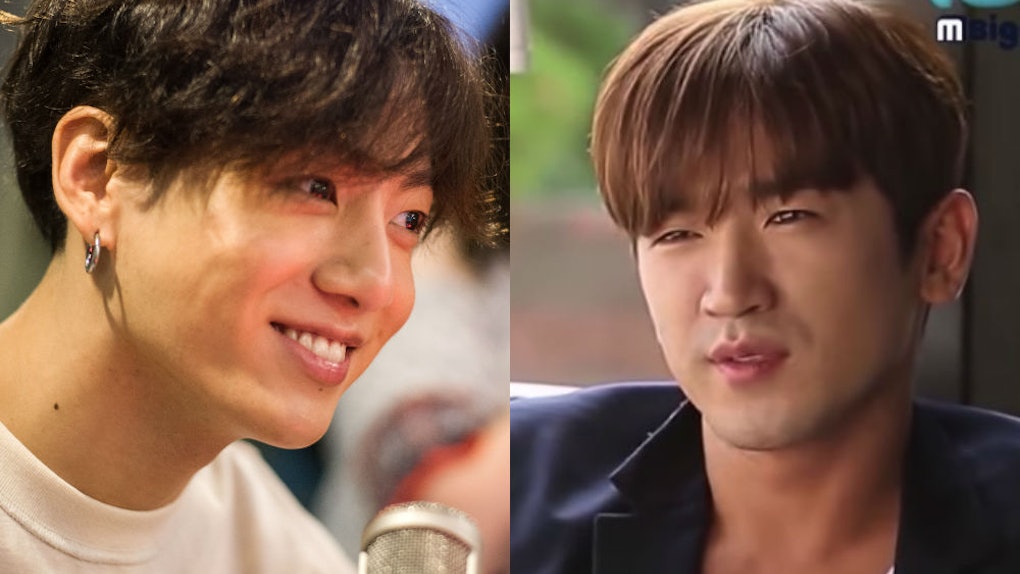 If you're a relatively new BTS fan and you don't know who Shinhwa or Minwoo is, let me give you an abridged history lesson (I can do that, because I've known all about them for, like, a whole month and a half). Anyway, the easiest way for me to explain to you what Shinhwa is all about is to say the veteran boy band is to Koreans what *NSYNC or the Backstreet Boys are to Americans — aka, one of the hottest, most notable, and highly respected boy bands of the '90s. The boy band all future boy bands would look up to for years to follow. And Minwoo? Well, some might say he's Shinhwa's Justin Timberlake. And Shinhwa's Minwoo's Instagram congratulating Jungkook and BTS highlights how proud veteran Idols are of BTS' success.

Jungkook and Minwoo kicked off a friendship back in 2016 when Jungkook appeared on the Korean MBigTV reality show Celebrity Bromance. While the show usually documents already established celebrity friendships, there was somewhat of an exception made when they decided to have Jungkook, a member of the then-fledgling boy band BTS, to meet up with Minwoo for the first time.

Obviously, the opportunity was no small thing for Jungkook. Shinhwa is a big deal for any K-Pop Idol considering that, with over 20 years logged as a band, they're the longest-running boy band in K-Pop history. BTS even performed Shinhwa's hit "Perfect Man" in a 2015 episode of MBC's Music Festival.

Let's just say Jungkook was more than eager to meet Minwoo and pick his brain for some advice about making it (and lasting) in K-Pop. They became fast friends and have kept in contact ever since. And based on Minwoo's reaction to all the success BTS is seeing with their latest album, Map of the Soul: Persona, he's definitely one veteran idol that is 100 percent in BTS' corner.

On April 18, Minwoo shared a screenshot of a text conversation he had with Jungkook after listening to MotS: Persona. According to a translation by Soompi, he praised the boys' lead single off the album, "Boy With Luv," and encouraged Jungkook to enjoy the success.

“Jungkook, your song is so good," Minwoo wrote. "I keep humming it haha.” Same, Minwoo. Same.

“Why are you crying~ You should smile ^^," Minwoo responded. "Don’t get hurt and always have fun promoting with your members!”

I'm not crying, YOU ARE! Check out their interaction below!

BTS just made major history in the U.K. with their new album Map of the Soul: Persona by becoming the first Korean act ever to have a No. 1 album on the official music charts. On top of that, BTS set three Guinness world records with their music video for "Boy With Luv."

It's clear from Minwoo's messages to Jungkook that, as a veteran Idol who paved the way for artists like BTS, he's so proud of all that BTS has achieved. And now, BTS is paving the way for even more K-Pop bands to blow up worldwide (lookin' at you, TXT!).

If you're interested in learning more about Jungkook and Minwoo's friendship, check out their episode of Celebrity Bromance below!

More like this
Is Taylor Swift's "Mr. Perfectly Fine" About Joe Jonas? Sophie Turner's Instagram Has Fans Curious
By Brandy Robidoux
The 'Glee' Cast's Tribute To Naya Rivera At The 2021 GLAAD Media Awards Was So Moving
By Abby Monteil
When Will BLACKPINK's Lisa Make Her Solo Debut? It May Be Right Around The Corner
By Michele Mendez
Stay up to date