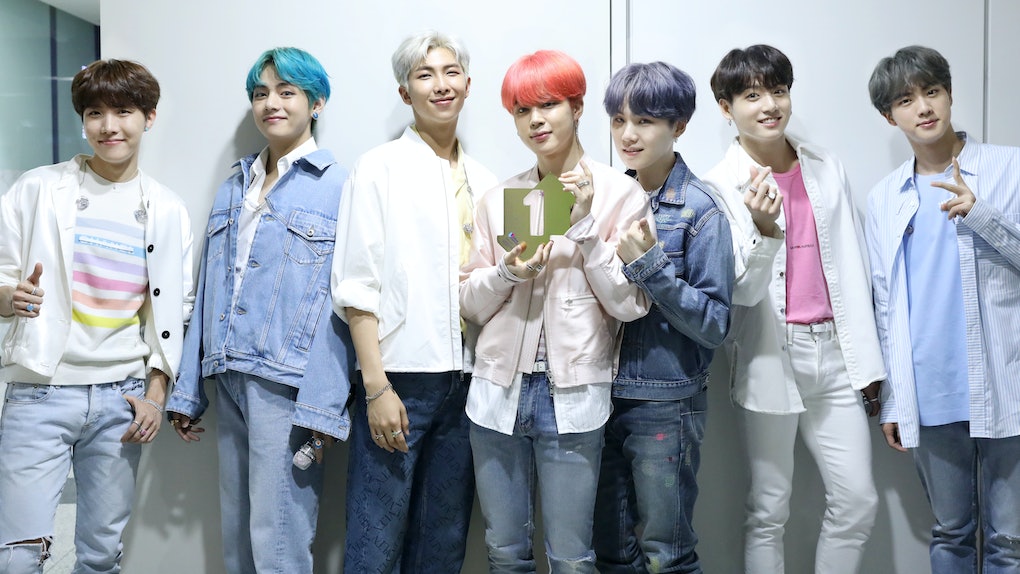 BTS Made History On The U.K. Charts With 'Map Of The Soul: Persona,' But Who's Surprised?

According to a press release received by Elite Daily, Jungkook, V, Jimin, RM, Suga, J-Hope, and Jin have added another first to their list of history-making accomplishments.

The boys' Map of the Soul: Persona album has officially shot straight to the top of the UK’s Official Albums Chart, making it their first No. 1 in the country, and making them the first Korean act to ever achieve that feat.

And that's not the only first the boys' achieved in the U.K. Their single, "Boy With Luv," marks the band’s first ever UK Top 15 single, debuting at No. 13 today.

With stats like that in the United Kingdom, it's no wonder the boys were able to sell out two nights at the famed Wembley Stadium within hours of the Love Yourself: Speak Yourself tour tickets going on sale. U.K. fans can look forward to those concerts going down on June 1 and June 2.

And that's not the only jaw-dropping accomplishment the boys' have walked away with in Europe. The boys charted at No. 3 in Germany, No. 2 in Sweden, No. 2 in the Netherlands, No. 3 in Norway, No. 3 in Belgium, No. 5 in Italy, and No. 5 in France.

A note on that accomplishment in France: The French music market is notoriously hard to break into because of a 1994 law that dictates that 40 percent of all music played on French stations must be in French. According to France 24, the law was introduced as part of an effort to stem the encroachment of English into French culture and give homegrown talent a leg up. As a result, it can be very hard for any music that's not French to make a mark in France.

Even artists like Ed Sheeran (who coincidentally wrote the boys' MotS: Persona track, "Make It Right") has acknowledged how hard it is to break into the French market.

Considering BTS had absolutely no promo in the French market shows how far the boys' organic reach on platforms like YouTube and Twitter truly does reach.

And if that's not amazing enough, BTS is set to make more history in the U.S. as well. Although the tracking week for the Billboard 200 albums chart isn;t over yet, BTS' Map of the Soul: Persona is predicted to have already snagged the No. 1 spot, which will make it the boys third No. 1 album on the Billboard charts and the only Korean act to have accomplished one at all! These boys literally cannot be stopped.