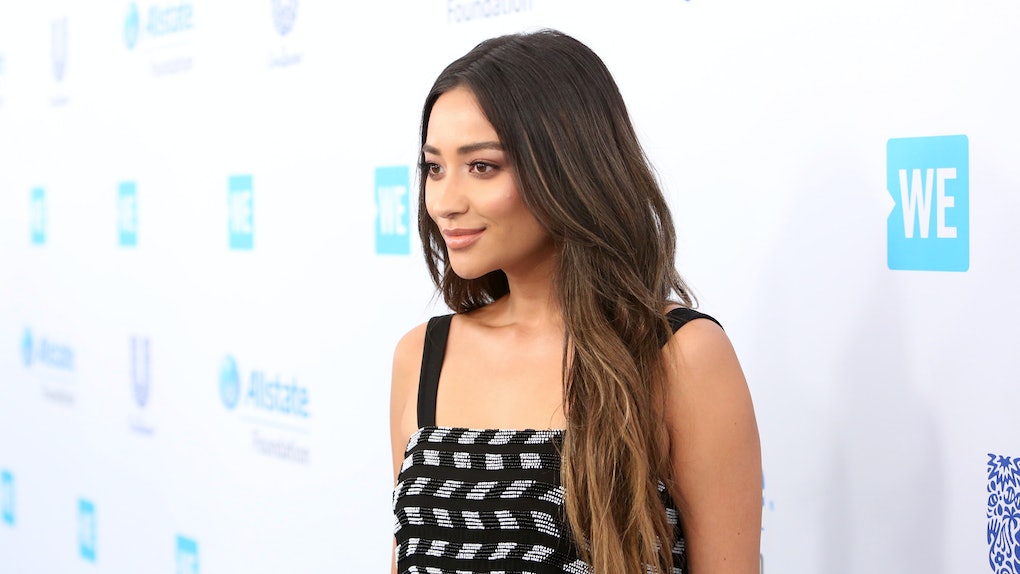 Shay Mitchell is talented, smart, and knows how to plan a fab "Shaycation." She's been in the public eye for quite some time, but her big break came when she scored the role of Emily Fields on Pretty Little Liars. After seven seasons, we all know the twists, turns, and mysteries that unravelled during PLL, but I'm taking you back to the beginning. Like, the way, way beginning. Shay Mitchell's Pretty Little Liars audition tape was posted on YouTube by the actress, and it will make you feel so, so nostalgic.

Mitchell said at the beginning of the video,

I've stalled for as long as I could, but I'm not going to stall on this any longer. I shot this 8 years ago, and let's just say... I was a little baby. So now I'm watching it I am a little bit embarrassed but it's fine, I'm going to watch it with you guys and share my thoughts.

Mitchell explained the reasoning behind her embarrassment by saying,

Mitchell was 22 years old in the audition tape, so her physical appearance has barely changed. SHAY, HOW DO KEEP YOUR SKIN SO GLOWING? DM ME. This video was definitely a walk down memory lane for Mitchell. She dishes on some things she loved about the audition and things she would've done different.

The audition opens with Mitchell in a green V-neck T-shirt, which cracks her up because she totally blends with the green background. She does a great job reading lines for the scene in the pilot episode when Emily meets Aria. Mitchell even comments on how great her fake cough was.

Two things I learned from the video — no one (not even Shay Mitchell) looks back fondly on their eyebrows and apparently EVERYONE owned a pair of moccasins at one point in their life.

After the audition portion of the video, Mitchell goes into detail about her plane ride to Los Angeles for the actual audition and the hotel she stayed in. It's seriously the cutest thing ever and really cool to get a behind-the-scenes look at the process.

You can tell that Mitchell starts to get a little emotional over the memories. Emily on PLL was a very dynamic character who had a lot of interesting storylines. Mitchell playing an openly gay character was well received by the LGBTQ+ community and the show even earned a GLAAD nomination.

Mitchell is fully aware of the impact Emily has on viewers. She said during an interview with Elite Daily,

I couldn't have imagined playing any other character. I always say this: It's one thing to be on a show that's so entertaining and it's something completely else, it's different to be on a show that has an impact on people's lives. And Emily definitely did have that.

Just seeing her arch from Season 1 to Season 7 and her really come into her own, I don't know, it reminded me of my adolescence and me being in high school. I did that exact same kind of arch. And you really grow up. I love the fact that all the girls maintain their relationship and that closeness. It was a really really fun character and arch to play.

PLL will always hold a special place in Mitchell's heart (and mine). The seven-season run was obviously met with a tearful goodbye.

Although she lived through filming the last episode, Mitchell assured Elite Daily that watching it on TV would be just as emotional. She explained,

I really need to be with people to watch it. I don't want to be by myself… it's going to be extremely emotional again because this is the last time our show will be airing a new episode.

Obviously, the finale has since come and gone. So sad. PLL was amazing, but Mitchell is on to other projects. According to her IMDb page, we'll being seeing her in some new projects come 2018 — two new series, The Heiresses and You, and a horror movie called Cadaver.

I'm glad Shay Mitchell has finally shown us her Pretty Little Liars audition tape — it was adorable and honestly not embarrassing at all. Can't wait to see what is to come with her new projects in 2018. Keep doing you, Shay.

More like this
The 'Glee' Cast's Tribute To Naya Rivera At The 2021 GLAAD Media Awards Was So Moving
By Abby Monteil
The Best Movie Soundtracks Were So Good, They'll Live On Forever
By Brandy Robidoux
Here's How To Vote For The Next 'American Horror Story' Theme Among 6 Options
By Cianna Garrison
Stay up to date