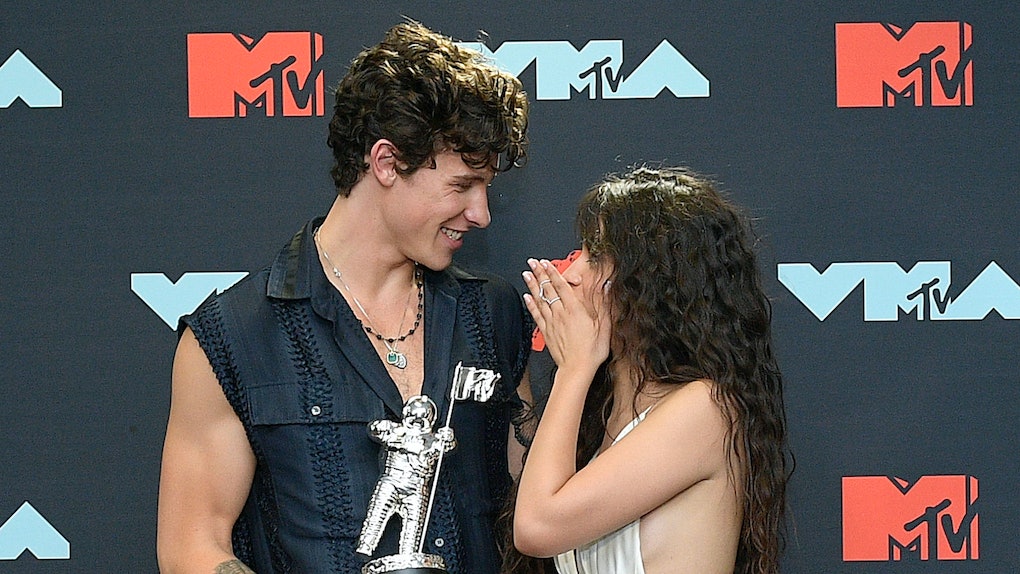 There's no doubt that the chemistry between Shawn Mendes and Camila Cabello both on and off the stage is steamin' hot. But many of their fans have been wondering: Will this Hollywood couple last? Though the two young celebrities are super open about their affection for one another, they've been fielding criticism about their relationship ever since the beginning. It's definitely not easy to be one of pop music's most talked about couples, with the news buzzing most recently about a potential breakup. This time, Shawn Mendes & Camila Cabello shut down breakup rumors with a hot Instagram that totally proves they're still going strong.

The "Señorita" collaborators squashed any rumors about a breakup with an Oct. 19 Instagram post on Mendes' account. The romantic photo shows Cabello giving Mendes a kiss on the cheek while he lovingly wraps one arm around his girlfriend and holds a drink in the other. Captioned with a simple black heart and tagged in New York, the lovebirds have clearly been enjoying their nights out together. Cabello replied to the sweet photo with four arrow-through-heart emojis that undoubtedly signify her lovestruck emotions.

Cabello also took on the rumor mill herself with a cheeky Instagram story. In her stories, the singer shared a screenshot of an article entitled "Proof Shawn and Camilla are broken up." Cabello tagged her boyfriend and added her own hilarious commentary: "Well when the f*ck were you gonna tell me?"

The rumors started brewing after fans noticed Mendes had deleted an older Instagram post of the lovebirds making out. In the video, Mendes explained, "We saw some comments on Twitter and stuff about how we kiss like fish. We just wanna show you how we really kiss," cuing Cabello to lick Mendes' face. The two lovebirds were extremely playful in the video, and looked like they were having so much fun poking fun at those who criticize their PDA. Though it's still unclear why Mendes deleted the Instagram post, the couple's most recent social media updates certainly prove it's not because of a breakup.

The couple's PDA has been the talk of the town this summer, after their romance bubbled up in early July. The two have been incredibly open about their relationship with the public and it seems like they're both totally in sync with each other. In a recent fan Q&A, Cabello even described her relationship with Mendes in the most adorable way: “I have known him for such a long time and he just feels like home to me so I'm really happy." It makes sense, considering that Mendes and Cabello met in 2014 while they were both opening acts for Austin Mahone's tour. The singers have both grown so much since then, collaborating on various chart-topping songs, such as "I Know What You Did Last Summer," and "Señorita."

Since Mendes and Cabello weren't shy about squashing all the rumors, it looks like their doubters had it wrong this time. Their relationship will undoubtedly continue to attract criticism, but the young celebrities seem to be handling the spotlight just fine.