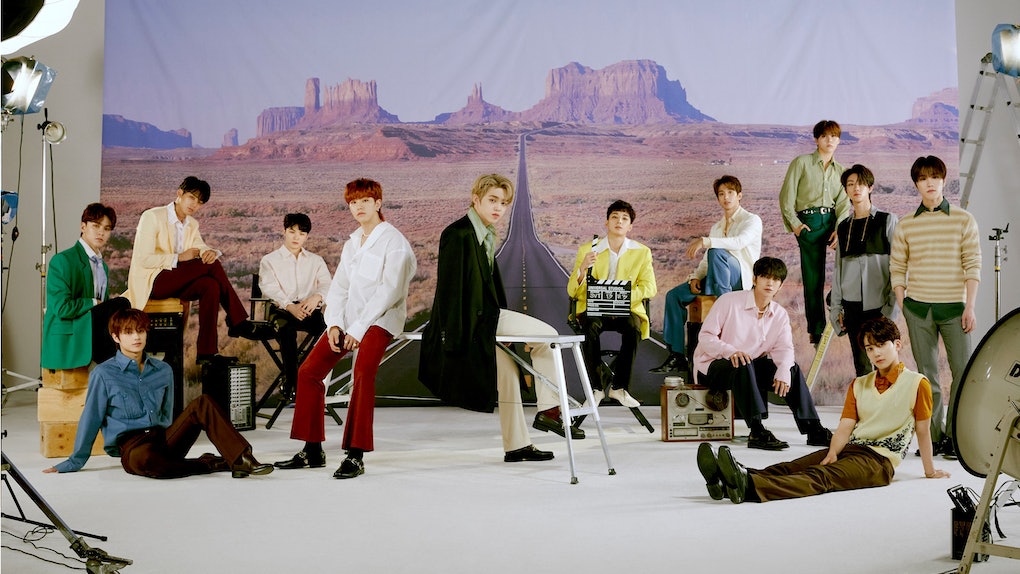 Brace yourselves, CARATs, because SEVENTEEN has made another comeback! The group dropped a new special album called ; [Semicolon], marking their third release of 2020 and their fourth album overall. So if you're a fan, you need to read SEVENTEEN's ; [Semicolon] album details in order to not miss a single thing about their schedule this time around.

; [Semicolon] arrived just a few weeks after the group released their Japanese mini album 24H and four months after dropping their previous Korean EP, Heng:garæ, featuring their single "Left & Right" in June. Heng:garæ surpassed one million sales in its first week of release, so fans have high expectations for ; [Semicolon].

SEVENTEEN's album details reveal this comeback is huge, so check out their schedule below.

Oct. 19 is the day SEVENTEEN dropped ; [Semicolon]. The EP came out worldwide at 6 PM KST (5AM ET). If you're researching the best websites to purchase it from, try the Weverse Shop (You can download it in the app store if you don't have it already). The platform is doing a special giveaway that will give some lucky fans the chance to win a videocall fansign with SEVENTEEN.

You'll love SEVENTEEN's album concept because it's so unique. Just like its title implies, ; [Semicolon] is inspired by what a semicolon represents.

"In a sentence, a semicolon allows a momentary break to enable seamless continuity and unhindered explanation," SEVENTEEN explained in a press release. "Youth also calls for a temporary break, which paves the way for longevity. The semicolon is not a symbol of the end. Rather, it represents the eternity of our journey in life. It gives the young generation a moment of laughter through the melody and instills hope to appreciate the true joy of living in the moment."

Unlike Heng:garæ, which represents a "journey of youth," ; [Semicolon] is also described as an "invitation for youth."

K-Pop albums are always jam-packed with all kinds of goodies and SEVENTEEN's new EP is no exception. Get this: ; [Semicolon] has 14 different versions, with one dedicated to each member of the group and a group version. Each edition comes with the following items:

The EP has six songs total: "Home;Run," "Do Re Mi," "HEY BUDDY," "Light a Flame," "AH! LOVE," and "All My Love." The lead single, "Home;Run," is described as a swing-genre based song that combines retro, rhythmic, and cheerful sounds. WOOZI helped write and compose the song, while VERNON and SEUNGKWAN also helped write some of the lyrics.

The best part is this EP includes several sub-unit tracks. "Do Re Mi" features SEUNGKWAN, VERNON, and DINO. "HEY BUDDY" has The8, MINGYU, and DK. "Light a Flame" sees JUN, HOSHI, WONWOO, and WOOZI working together, while "AH! LOVE" has S.COUPS, JEONGHAN, and JOSHUA teaming up.

See the tracklist and album credits below.

Fans can also hear a preview of the songs below.

CARATs can get more of an idea of SEVENTEEN's next concept through their ; [Semicolon] video teaser. Throughout the video, the members enjoy their time together while sharing drinks and going bowling together. Some of the guys receive invitations that say "Work Hard" and "Rest Hard," which could reference their concept of youth calling for a "temporary break."

On Oct. 19, SEVENTEEN returned with their Semicon lead single "HOME;RUN," along with a retro-themed music video for the track. In the clip, the guys search for a missing diamond in poker clubs and pool bars. Fans also noticed subtle references toward the group's previous music videos.

CARATs, comeback season is officially here, so be prepared for what's to come from SEVENTEEN!

This article was originally published on Oct. 13, 2020