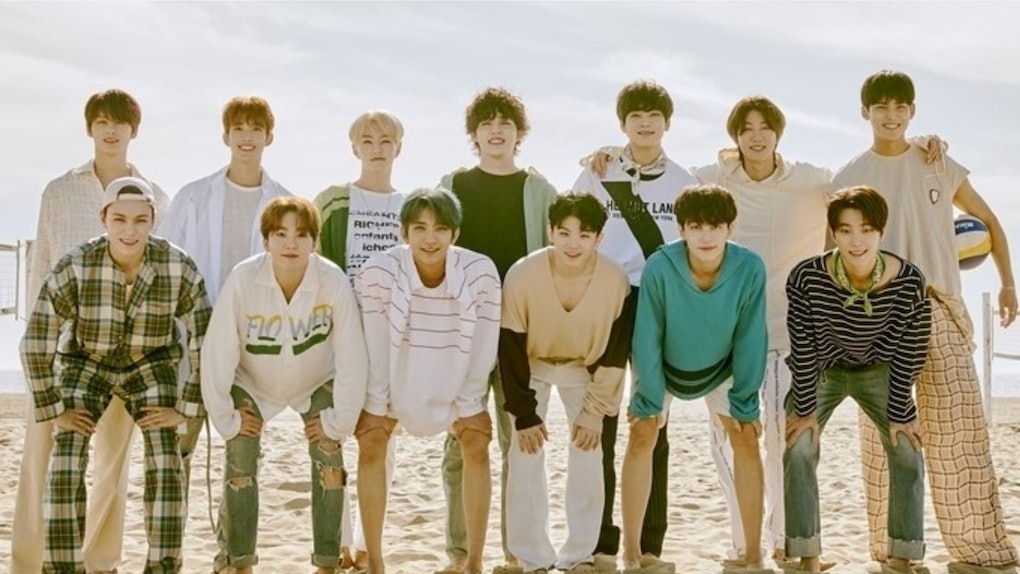 You might assume being a member of one of the most popular K-Pop groups in the world makes SEVENTEEN feel invincible, but just like anyone in their twenties, the thirteen members sometimes experience uncertainty. The group bakes those relatable feelings into their catalog of work, which is why their millions of fans, called CARATs, connect so strongly to their music. As they mature as individuals and a group alongside their ever-growing fandom, so do SEVENTEEN's dreams for the future. Following the success of their June 2020 album, Heng:garæ, which sold a million copies in its debut week, the group is more confident than ever they'll be able to accomplish every item on their bucket list, but only if they have their CARATs by their side.

SEVENTEEN calls Heng:garæ a "journey of youth" because it dives deep into their personal aspirations, as well as the challenges they face. The themes of the album show fans how much they've grown since their last comeback in September 2019. "We often felt pressured, and sometimes even intimidated as artists. But, through this album, we wanted to show everyone how we overcame such fears," S.COUPS tells Elite Daily, adding that he hopes fans will feel inspired to do the same.

From the start of Heng:garæ, fans immediately noticed a shift in SEVENTEEN's lyrics. In their 2019 lead single "Fear," the guys sing about running away from themselves, but in the opening track of Heng:garæ, "Fearless," they face their challenges head-on. "Born new me/ Break this wall/ It won't be scary today," they confidently declare on the track.

"It’s about us overcoming our poison from within," Vernon says of the song, which he considers a sequel to "Fear."

SEVENTEEN further explores this theme of perseverance in their EP's single "Left & Right," in which they compare life to a race that has moments of hesitation between each lap. When they debuted as a group in 2015, they were only teenagers, but now, the members are young adults, and this moment in their career feels like they're at a crossroads.

"Uncertainty, I feel, is an emotion we all consistently face. In a sense, having to make decisions is a mandatory part of life. It is stressful," SeungKwan says. In a market with so many K-Pop groups, it may feel like a competition to stand out, but in "Left & Right," SEVENTEEN puts those negative feelings in their rear-view mirror. "Once you get over it, everything becomes a meaningful memory."

One way SEVENTEEN worked this idea of letting go into "Left & Right" is through their choreography. "Our previous choreography has been quite intense and detailed, but this time we wanted to go with a more fun and easy-to-follow routine. We also wanted everyone to be able to have fun and smile brightly in difficult times such as now," Dino says.

As for where SEVENTEEN is heading from here, there's really only one direction: up. Their "Left & Right" music video's final scene literally shows them soaring into the sky, which is not only a representation of Heng:garæ — a Korean word that means to lift someone high up in the air — but also their journey to success.

Heng:garæ surpassing one million sales in its first week of release — breaking their previous record of 700,000 for An Ode — was one accomplishment that put the momentum they're experiencing in 2020 into perspective. Mingyu admits the feat was "surprising," and the group has CARATs to thank for helping them achieve it. "We don’t even know how we can repay the tremendous love we’ve received, but we’re going to work harder and do our best," he shares.

The milestone is especially meaningful considering SEVENTEEN is credited as producers on each track on the album. Getting involved in their music's production process helps them further develop as artists. "There are times we compete in good faith with each other and also collaborate for a better performance, allowing us to grow as a group," Wonwoo says, with WOOZI adding the group's different thoughts and experiences are "crucial parts of our album."

Apart from feeling thankful they have CARATs by their side, SEVENTEEN also finds comfort in knowing they have each other to rely on. "It’s almost like accumulating mileage points in a supermarket you always go to. As we spend more time together, we build more trust, and that’s how we’ve grown to support and often lean on each other," Jeonghan explains.

"It’s really great to have literally a dozen people to rely on. I want to enjoy this happiness and support for the rest of my life," DK adds.

While SEVENTEEN has accomplished so much together already, they're confident the best is yet to come. "One of our dream stages are the Billboard Music Awards, so we’ll hopefully be able to achieve that as a group during the term of these upcoming five years," Joshua says.

With the help of CARATs, it seems like SEVENTEEN can make any dream a reality.