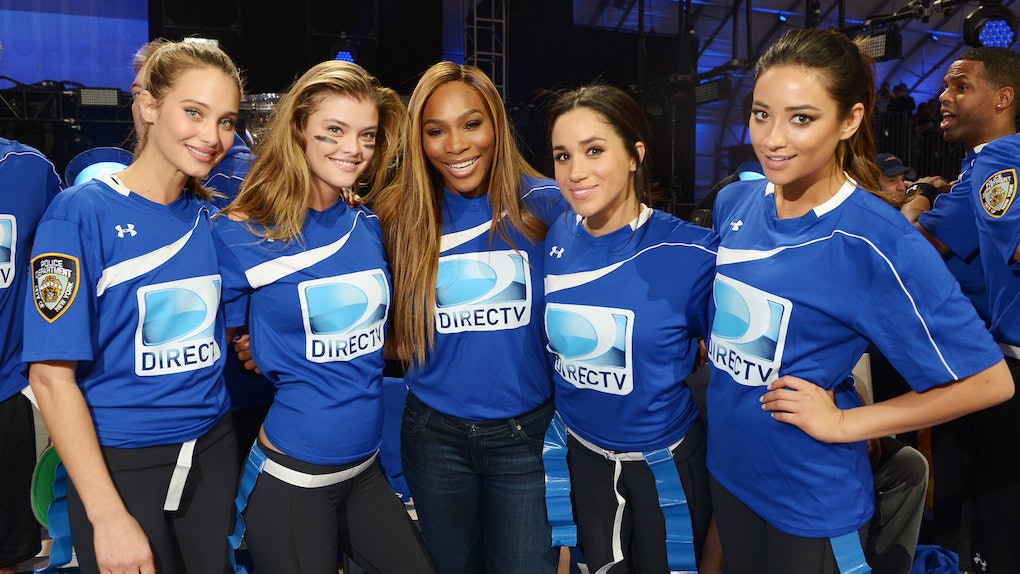 Serena Williams' Wedding Day Advice For Meghan Will Have You Saying, "Same"

I am not married or engaged nor am I, frankly, anywhere near being either one of those things but I imagine that, when the time comes, I'll be showered with wedding day advice from already-married friends. Basically, the only difference between me and Meghan Markle on our wedding days will be that I'll probably be marrying a normal person and getting marital advice from normal friends, while she has chosen to marry oh, you know, the prince of England and is receiving marital advice from her superstar tennis player friends. And Serena Williams' wedding day advice for Meghan Markle is just as stellar as pretty much everything else she does.

You see, Markle and Williams have been friends for years and there's even been speculation that the tennis superstar and new mom will be a member of her bridal party. So, obviously, like any good potential-bridesmaid-level-friend, Williams was happy to share some wedding day advice with her pal in a recent interview with Good Morning America.

She drew from her own experience to remind Markle of the importance of embracing the now...and enjoying your cake. "I just think it's so important to enjoy the moment," she advised. "And eat the cake—I didn't get to eat mine at the wedding. We were just having so much fun."

And it's not just the day of the wedding that Markle should be enjoying! "If I could give her any advice it would be to enjoy the preparation, enjoy the planning, it goes so fast," Williams added.

"I'm obviously super happy for her," she continued. "She's such a great girl and she is incredibly nice and I couldn't be happier for her."

Williams had her own fairytale wedding with now-husband Reddit founder Alexis Ohanian in New Orleans last November and, although I wasn't there, I can safely say based on the pictures that it was as much fun as she says it was. I mean, you guys, BEYONCE WAS THERE.

While there are no reports of Markle having been a bridesmaid at Williams' wedding, some fans (like myself) are still wondering if she'll make the tennis player a bridesmaid at her upcoming royal wedding.

“I’ve heard that Meghan wants her mother to walk her down the aisle, which would be a sweet moment," an unidentified source told US Weekly. "And while it is very much a British wedding, expect a few American touches too. She’s not picked a chief bridesmaid, she’s chosen a maid of honor."

While I, personally, would love it if Williams was that maid of honor, it's looking unlikely given her busy tennis schedule. During the Good Morning America interview, she responded to a question asking whether or not she was going to the wedding by saying "I don’t know, I think it's during one of the tournaments, I'll see if I can make it."

Oh, to be casually be juggling a pro tennis career with a social calendar that involves things like the ROYAL FREAKING WEDDING (and let's also throw motherhood and marriage in there as well). Like, same.

In a Twitter announcement in December, Kensington Palace announced that:

His Royal Highness Prince Henry of Wales and Ms. Meghan Markle will marry on 19th May 2018.Today's announcement follows earlier confirmation of the month of the wedding and its location at St George's Chapel, Windsor Castle.

So, yeah, the wedding is very soon. I guess only time will tell if Williams manages to squeeze it into her busy schedule.

More like this
Zac Clark & Tayshia Adams Are Wedding Planning & I’m So Pumped
By Lydia Wang
When Are Ariana Grande & Dalton Gomez Getting Married? Here's The Reported Tea
By Corinne Sullivan
Is Madison LeCroy Dating Whitney Sudler-Smith? Here's What Sources Say
By Candice Jalili
Stay up to date