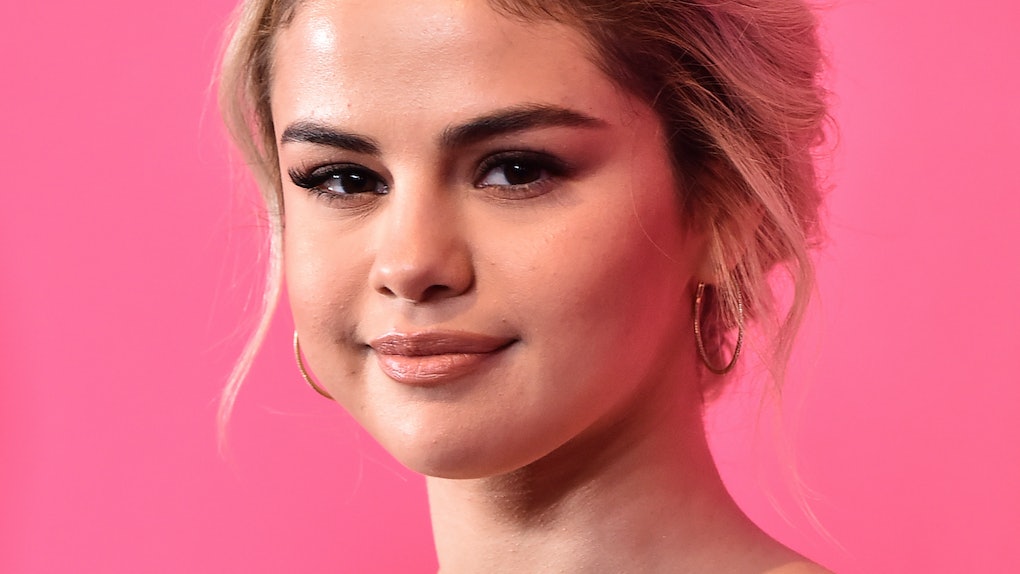 13 Reasons Why returning to Netflix for a second season has a lot of people excited — Selena Gomez included. The show has seen its fair share of controversy, but is not shying away from the tough topics. A second season is expected to air on Netflix in 2018. If you're a fan of the show, Selena Gomez's Instagram About 13 Reasons Why will get you so, so excited for the new season.

The pop star and executive producer of the show posted an Instagram of two photo booth pictures that featured cast members celebrating the wrap of Season 2. Katherine Langford (Hannah Baker), Dylan Minnette (Clay Jensen), and Christian Navarro (Tony Padilla) are just a few of the celebs who are striking a pose with Gomez.

The cast members in the photos sported giant smiles and silly poses with Gomez by their sides. Gomez is still effortlessly rocking her blonde locks and looks amazing (as always). She captioned the photo,

And this year wraps up with another committed journey with @13reasonswhy -Season 2 is coming. To every person on this project, thank you for coming back. Good or bad we are committed to having the tough conversations, to telling the story that can start change.

The show has received mixed reviews since airing on Netflix. While it has a strong fan base, some groups and individuals are worried that the show glamorized suicide and did not provide enough resources to those struggling with mental health issues.

The growing concern has stretched wide, and even pushed The National Association of School Psychologists to release a statement in May. The statement from the organization said,

Its powerful storytelling may lead impressionable viewers to romanticize the choices made by the characters and/or develop revenge fantasies. They may easily identify with the experiences portrayed and recognize both the intentional and unintentional effects on the central character.

Netflix responded with a statement that included a promise to include more viewer warnings. As printed by The Hollywood Reporter, the statement said,

While many of our members find the show to be a valuable driver for starting important conversation with their families, we have also heard concern from those who feel the series should carry additional advisories. Currently the episodes that carry graphic content are identified as such and the series overall carries a TV-MA rating. Moving forward, we will add an additional viewer warning card before the episode as an extra precaution for those about to start the series.

In the meantime, viewer content discretion is advised, and if you or someone you know is in trouble or having suicidal thoughts, call 911 or the National Suicide Prevention Hotline at 1-800-273-8255.

As it turns out, 13 Reasons Why Season 2 will take on a very different storyline than the first season.

Dylan Minnette spoke with Entertainment Tonight about what viewers can expect. He said,

This season particularly is a lot about recovery. It's naturally going to progressively get to a more emotional place, due to the nature of the story we're telling. I'm sure we're all heading in some dark directions again. I think anybody would be surprised if we weren't.

The key word in Minnette's description is "recovery." While Season 1 unravelled a web of secrets and exposed the realities of people struggling with mental illness, Season 2 will most likely focus on the long and difficult recovery process. This could include recovering from losing someone close to you because of suicide, an attempted suicide, or sexual assault. 13 Reasons Why is definitely not afraid to bring up these tough topics.

Whether you're a fan of the show or not — it has definitely stirred up a conversation about mental health. Season 2 of 13 Reasons Why will be kicking off in 2018, so keep an eye out for more details about the series.