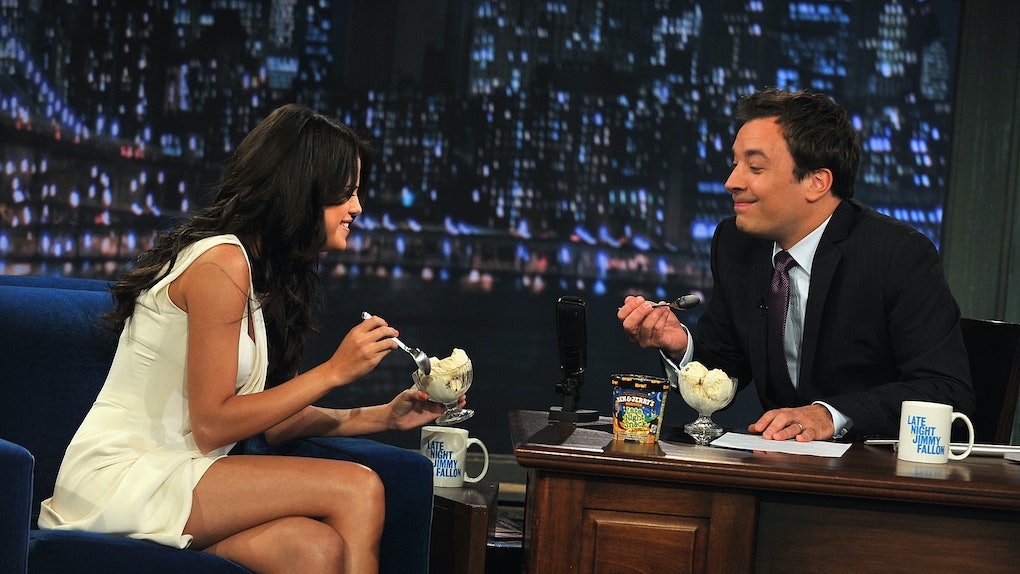 Selena Gomez might be having the biggest year of her life career-wise, but that doesn't mean she's lost her very relatable and endearing love for food. Her palate is so freaking on point and relatable that even if she wasn't as successful as she was, we'd probably still love her for her taste buds alone. In fact, Selena Gomez's favorite foods might honestly make you wonder if you could become famous, too, since you probably snack on just about everything that she likes — with the exception of one particularly strange preference.

As the most-followed person on Instagram, Gomez has a uniquely special platform to tell us what she likes and doesn't like on a daily basis. To be fair, most celebrities have a similar platform, but the key difference is that Selena Gomez actually shows us when she goes out to get fast food, or eats a donut backstage, which pretty much sums up why people worship her as much as they do.

Selena Gomez is an amazing singer, actress, activist, and all-around fantastic person, and at the end of the day, she just seems like she'd be downright fun to grab a burger with. Here are 10 of her absolute favorite foods, so that you can feel a little closer to her the next time you catch yourself enjoying the same snack as her.

Sometimes the shortest declarations are the strongest. This simple tweet by Gomez can only mean one thing: Pizza is something she holds near and dear to her heart, and that's something that pretty much everyone can relate to.

One of Gomez's favorite snacks is Flamin' Hot Cheetos, and she's been quoted saying she always keeps the snack with her when she's on tour, in addition to a little bit of chocolate. After all, what goes better with a handful of Cheetos than a chocolate bar, amirite?

Gomez "loves a good plate of fried chicken," which basically confirms she must be a great friend to have around for late night food runs.

Stars are just like us, except for when they proclaim their love for eating whole lemons as if they're apples. Apparently, Gomez likes to eat them whole and sprinkle a little salt on them to, uh, sweeten the deal? Whatever floats your boat, girl.

Once in a while, you just need to have an original glazed donut with chocolate frosting, because life is too damn short to not indulge from time to time, guys. Gomez knows this better than anyone, and she even snacks on donuts in full glam, which makes it that much better.

Further proof that Selena Gomez is the best friend you've never had: She openly professes her love for a good ol' fashioned McDonald's happy meal. Girl has some seriously good taste.

Mangoes are Gomez's favorite fruit, aside from that whole eating-lemons-like-they're-plums situation — not sure I'll ever get over that, TBH.

Chicken pot pie is a total staple for Gomez while she's on tour, which makes sense when you think about it: It's a portable little spaceship of comfort food. Nice choice, girl, nice choice.

Pickles are a must-have when Gomez is on tour, and, in her opinion, they're a great way to keep things simple: She keeps "plenty of water and pickles around" at all times, which I can't necessarily relate to, but maybe I need to try snacking on this more often when I'm feelin' hangry?

Selena Gomez might not exactly enjoy drinking olive oil, but she does it frequently as a way of taking care of her vocal chords before she goes onstage to perform. She admits that it's "disgusting, but it's good for your throat."

OK, I can't exactly say I'll chug olive oil with you, Selena, but I still love you, and I'd still love to grab dinner sometime.