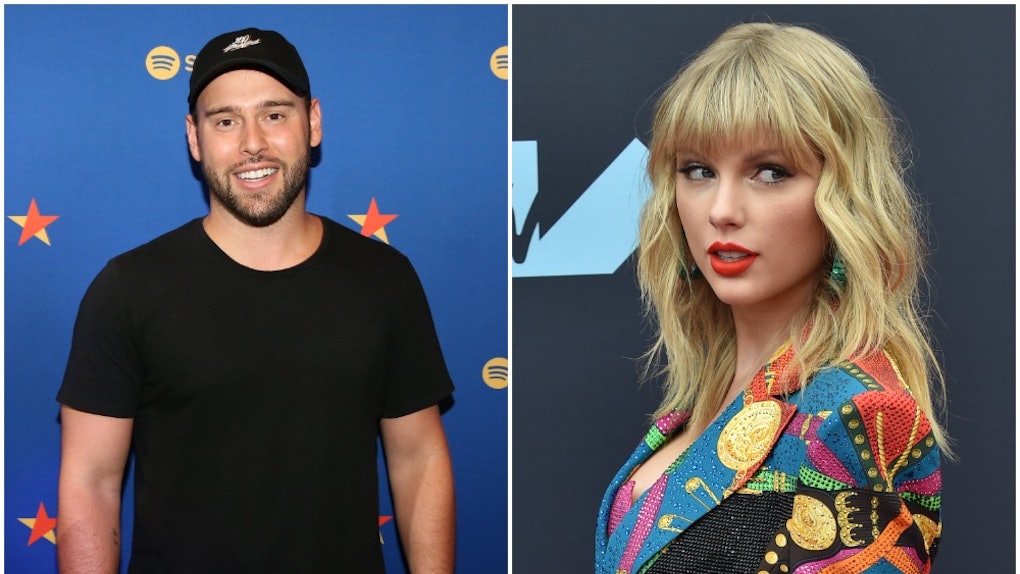 Taylor Swift's fans are one of the most passionate fanbases in the world, and, when it comes to Tay, they've got a lot of love to give. These days, though, there are two words that will elicit more anger from them than anything else: Scooter Braun. The music mogul is wrapped up in a vicious spat with Swift over the rights to perform her pre-Lover-era music, so Swifties are watching his every move. Now, he shared a message they just can't get behind. Scooter Braun's tweet about "kindness" has Swifties everywhere rolling their eyes.

Before you see Braun's message, it's important to know the latest on what's going down between Braun and Swift. You see, the ongoing feud between the two intensified after Swift claimed Big Machine is preventing her from performing her old hits at the 2019 American Music Awards.

“Right now, my performance at the AMAs, the Netflix documentary and any other recorded events I am planning to play until November 2020 are a question mark. I’ve tried to work this out privately through my team but have not been able to resolve anything," Swift wrote in a Nov. 14 tweet.

Big Machine swiftly denied Swift's claims. "We were shocked to see her tumblr statements yesterday based on false information. At no point did we say Taylor could not perform on the AMAs or block her Netflix special. In fact, we do not have the right to keep her from performing live anywhere," they wrote on their site.

All things considered, Swifties aren't exactly hitting the "favorite" button on Braun's social media posts, and his latest has them flat-out fuming.

"Kindness is the only response," Braun posted on Nov. 18, also writing that those are "words to live by."

While it's a seemingly nice message, Swift's fans aren't buying it.

“Actions speak louder than words,” one account named "I stand with Taylor" wrote in response to Braun's Tweet.

"Disagree. Sometimes you don’t allow yourself to be silenced and you fight for what’s right. Even if it’s loud and uncomfortable. Girls don’t have to play nice when boys play dirty behind closed doors and post kindness memes," another wrote.

"I’m not sure I’m feeling this coming from you. With your 1st response to deny Taylor the right to perform her own songs is pretty greedy," one fan said.

Many Swifties couldn't help but laugh at Braun's tweet.

With the AMAs just around the corner on Nov. 24, everyone is waiting with bated breath to see what will go down at the show. While Braun's team insists that they're not blocking Swift from playing her throwback tracks at the show, it's likely we won't find out what songs are on Swift's final AMAs setlist until she hits the stage.