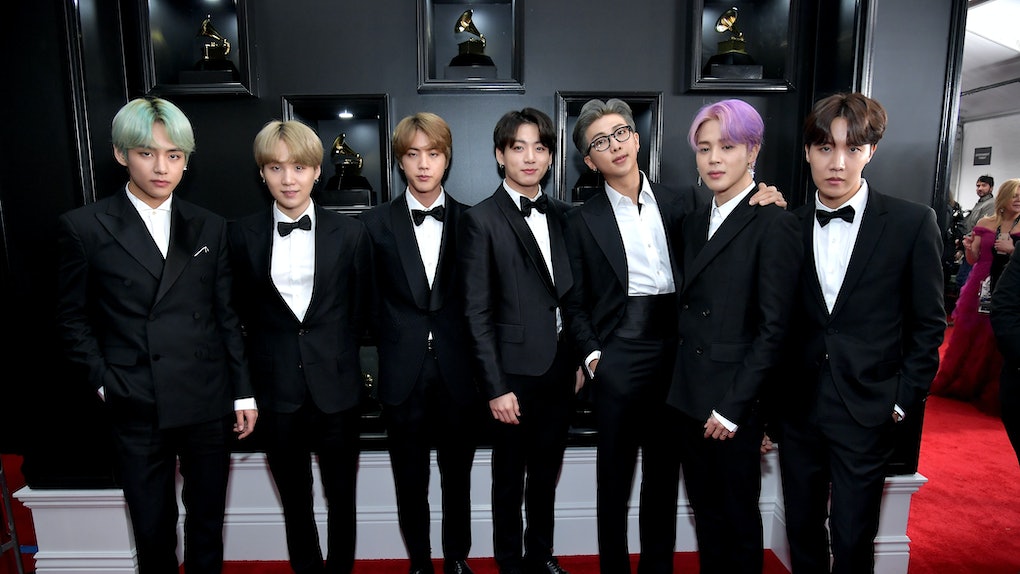 Will BTS Be At The 2019 AMAs? Here's Why The Chances Are Slim

BTS made history when they performed "DNA" at the 2017 American Music Awards. Not only was it the group's debut television performance stateside, but it also marked the first time a Korean boy band performed at the award show. Since then, BTS has made numerous U.S. television performances like on Good Morning America and the Billboard Music Awards, but for the BTS ARMY, the AMAs will forever hold a special place in their hearts. Sadly, BTS didn't attend the 2018 AMAs, and they probably won't attend this year's ceremony, either. The group has plans the weekend of the show, so the chances of BTS being at the 2019 AMAs are slim to none.

The 2019 AMAs are on Sunday, Nov. 24, at the Microsoft Theater in Los Angeles. Artists like the Jonas Brothers, Lizzo, Billie Eilish, Camila Cabello, and Selena Gomez are confirmed as performers, but, at the time of publication, BTS is not on the lineup. Despite being nominated for Favorite Social Artist, Tour of the Year, and Favorite Duo or Group, fans are pretty positive BTS won't appear at the AMAs because the ceremony conflicts with BTS' confirmed schedule.

On Nov. 23 and 24, BTS will hold their fifth official fan meeting in Japan. This year, the theme is "Magic Shop." BTS' fan meetings are huge because they showcase special performances and comedic skits not seen on BTS' world tours and they often get turned into DVDs so fans who couldn't attend in person can still experience the show. BTS will hold a second round of fan meetings in Japan on Dec. 14 and 15.

The AMAs will take place on the same day as BTS' second fan meeting, so, considering the group can't be in two countries at once, they probably won't attend the show. If BTS wins any of their AMAs nominations, it's possible the guys filmed an acceptance speech to play at the show in their absence like they did for the 2018 iHeartRadio Music Awards.

Although BTS probably won't be at the 2019 AMAs, fans still have a lot to look forward to. Following the group's fan meetings, BTS will perform at the Melon Music Awards in Seoul, Korea, on Nov. 30, and then at Jingle Ball in Los Angeles on Dec. 6.

Get ready, ARMYs. BTS' schedule is packed with performances sure to be as amazing as ever.

More like this
Here's Why Meghan Markle Reportedly Isn't Attending Prince Philip's Funeral
By Cianna Garrison
Do The BTS Members Have Personal Instagrams? Here's What Baby ARMYs Need To Know
By Michele Mendez
Here's How To Stream 'Let's BTS' With Subs & Relive All Of BTS' Best Moments
By Michele Mendez
Stay up to date