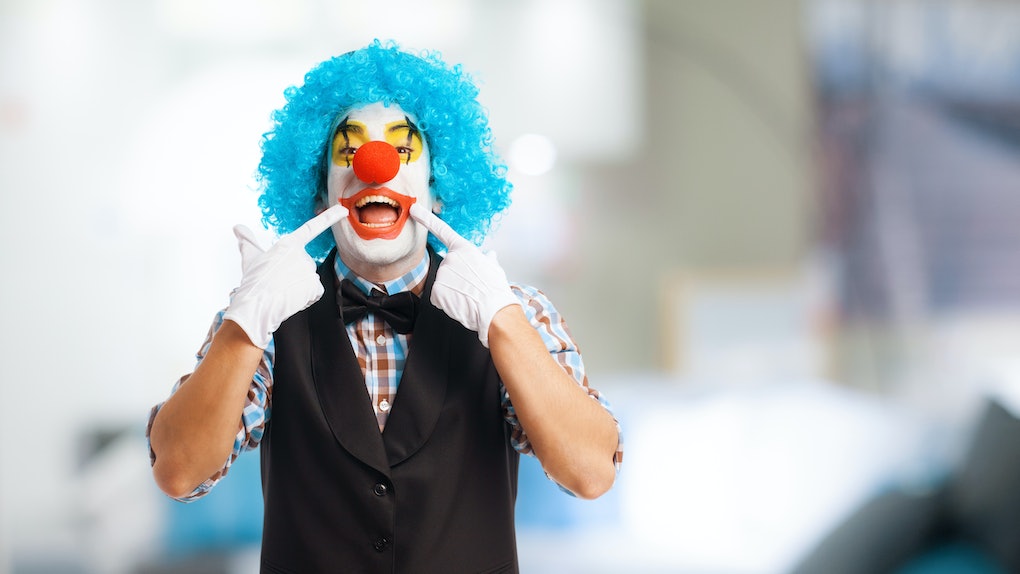 Scared Of Clowns? You Can Definitely Relate To These 8 Things

The technical term for a fear of clowns is "coulrophobia," but for anyone who finds the presence of these creepy-faced, large-footed, pieces of hell on earth, it's so much more than just one word. There's nothing entertaining about clowns. In fact, there are things people who are scared of clowns avoid, because even one not-so-subtle red nose triggers a replay of the worst nightmares ever.

Yes, it's that serious. There are so many disturbing details about clowns that people overlook, because they've booked them at a discounted rate for a kid's birthday party. Money may be the root of all evil, but clowns are a close second.

Most people have nightmares of falling or being chased, but for me, I am usually hyperventilating because Clappy the Clown and his friends are consecutively trying to eat my face and make me a balloon animal. It's twisted, but that's just how it is when you're accepting of all avenues of life except clown-hood. This isn't an exaggeration, which is why it is imperative that I, and other people who fear clowns, swerve anything associated with them. It's not the easiest task in the world, but if it means no fear flare-up, we aren't playing around with a few of these things.

I don't care if the tent is "pretty," because even driving past it makes my stomach turn and my forehead sweat. What's worse? People are voluntarily exiting their cars and joyously walking to this tent like clowns aren't just chillin' in there. To me, it's a trap, and there is no way in hell I am getting suckered in that easily. Trust me, going to a circus would be the complete opposite of a bucket list item... it'd be the end of me.

Since when was it OK to allow a man or a woman with exaggerated makeup, oversized clothes, and a large red nose to enter your home and entertain your children and their friends? That doesn't even sound enjoyable; it seems more like the plot of a Stephen King book. Please, if you plan on bringing this nightmare trigger to your kid's birthday, do not put it in small print, because those of us who are scared of clowns will descend into a dramatic hot mess and possibly traumatize the kids almost as much as that clown.

Before you ask, "How could the Happiest Place on Earth be scary?", the next time you're at Disneyland, look down at Goofy's feet. Those things are illegally huge and clown-like. Honestly, Disneyland would be the perfect stomping grounds (no pun intended) for a massive-footed clown to continue its treacherous reign of terror.

A clown town cocktail consists of a half ounce of peach schnapps and a full cup of get it the hell out of my face. Consuming anything involving the word "clown" is out of the question. It's hard to even say the word casually, so why would I voluntarily put something associated with it in my mouth? No way, not going to happen.

Look, we've always been taught that people are beautiful on the inside and out. But when that particularly terrifying laugh exits out of the mouth of anyone, please expect us to be darting in the other direction and hightailing it for the exit. Sorry, not sorry.

Mimes are too close to clowns. They may not say anything or make noise, but it's basically like a clown plotting a silent attack. From the makeup to the stripes, we are incredibly not here for it. What's the point, anyway? If you wanna play charades, we're game... just leave the clown qualities at home.

Clowns are known to do about anything for attention, and that includes juggling. How do we know that your clown homeboy who taught you to juggle isn't lurking somewhere nearby? It's certainly not worth the risk, and there are plenty of other entertaining things to hold our attention other than rotating balls succumbing to gravity.

Ronald McDonald in no way makes me want to order a meal. In fact, the very thought of him handing me a Big Mac gives me an anxiety attack just thinking about it. Why is a clown a mascot for a fast food restaurant, anyway? I don't care if McDonald's starts selling the finest meals known to man... I'm not lovin' it.

Clowns may seem harmless and innocent, but for some of us, they're the deal-breaker that could make us lose our composure in an instant. But since we have to walk the same earth as clowns, we'll simply have to hop, skip, or jump in the other direction.