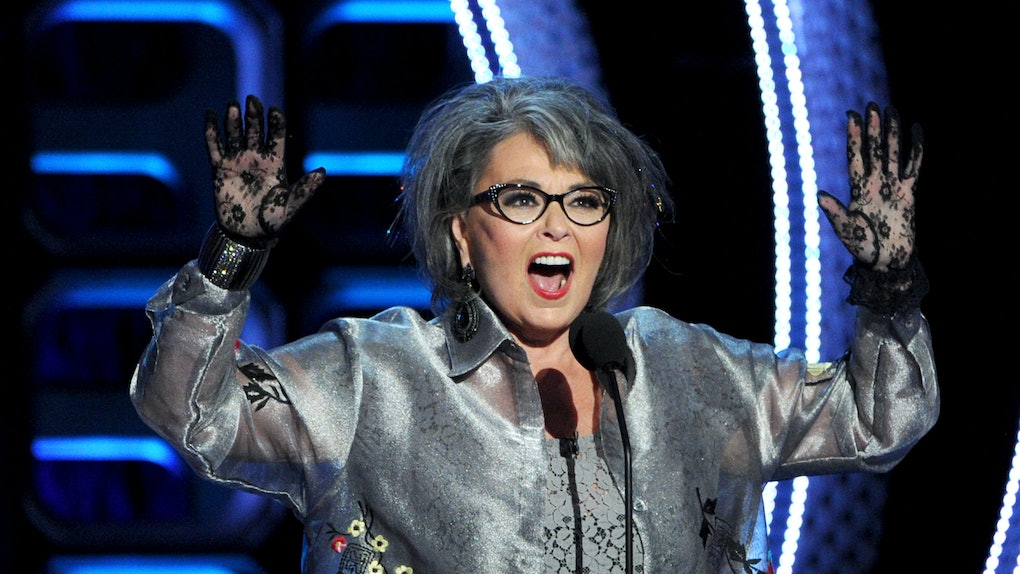 Kim Kardashian is visiting the White House to talk prison reform with the president. Melania Trump is missing in action. The pharmaceutical company that makes Ambien just dissed Roseanne Barr on Twitter. It's only Wednesday, folks. Seriously. How is all that possible?And yet, Sanofi's tweet about Roseanne Barr and Ambien is shady as f*ck, and I can't even believe it's real.

You probably already know that ABC made the bold move on Tuesday, May 29, to cancel a hugely popular revival of Roseanne after its star tweeted a racist insult of Valerie Jarrett, an Obama White House aide. Earlier in the day, while responding to an article peddling a conspiracy about the Obama White House, Barr referred to Jarrett as the product of the "Muslim Brotherhood and Planet of the Apes," if they had a child.

Barr later tweeted, "I apologize. I am now leaving Twitter," but did not leave Twitter. Her subsequent tweets ignited a firestorm of controversy, as she expressed regret for her comments about Jarrett, calling it a "bad joke" — but also blamed it on Ambien, a sedative used to treat insomnia. Then Sanofi, the pharmaceutical company that makes Ambien, weighed in with this epic tweet pointing out that the side effects of the medication don't include racism:

Barr has since deleted all of her tweets referencing the medication, per CNN. The network reported that she tweeted, "guys I did something unforgiveable so do not defend me. It was 2 in the morning and I was ambien tweeting -- it was memorial day too — i went 2 far & do not want it defended — it was egregious Indefensible. I made a mistake I wish I hadn't but ... don't defend it please." She mentioned Ambien again in a later tweet, per CNN saying, "Not giving excuses for what I did(tweeted) but I've done weird stuff while on ambien — cracked eggs on the wall at 2am etc."

When people started hitting out at Barr for indicating that Ambien might have influenced her decisions (i.e. effectively blaming her racist comments on the medication), she walked the comments back and said that she blamed herself.

This Ambien skulduggery is distracting from the root of the outrage, though, which was Barr's original comments — and even her apology. Regardless of what she tweets now that the dam has broken, her sentiments are clear in her initial apology: She thinks she made a "bad joke" about Jarrett's "politics and her looks." She failed to recognize her own racism in her apology. In another tweet to a fan — many of whom she continued to respond to on Twitter into the evening on Tuesday — she said, "i'm not a racist, just an idiot who made a bad joke."

Barr even went on to tweet to another fan that she felt bad for President Donald Trump because "he goes thru this every single day." Goes through what exactly?

Needless to say, it was a front-loaded news cycle on Wednesday morning. Right-wingers jumped to point out purported double standards, by offering examples of other pundits or public figures who have disrespected the Trump administration.

Feminist and author Roxane Gay penned an op-ed in Wednesday's New York Times that called President Trump a personified version of Barr's Twitter feed — known to peddle conspiracy theories, lies, racism, and xenophobia. Trump himself weighed in on the Roseanne cancellation, tweeting mostly about, well, himself. Gay, like many other of Barr's critics, stressed that Barr is free to be racist but not free from consequences, and that those same consequences have yet to catch up with so many other powerful people who are free to spew bigotry.

Barr had been given a platform by ABC, perhaps undeservedly so, given her demonstrated track record of questionable behavior, and it had swiftly been taken away. There's a kind of somberness to the whole display honestly, with a pharmaceutical company having to step in to entertain us on Twitter in the midst of all this. Roseanne was gone, then it was back, and now it's gone again. Are people going to learn?

More like this
These Tweets About The Bidens' Photo With The Carters Ask A LOT Of Questions
By Rhyma Castillo
These Memes About The Cell Phone At Biden's Address To Congress Are A "Set To Vibrate" Vibe
By Rhyma Castillo
Is Twitter Crop Gone? Here's What To Know About Posting Photos
By Cianna Garrison
Stay up to date