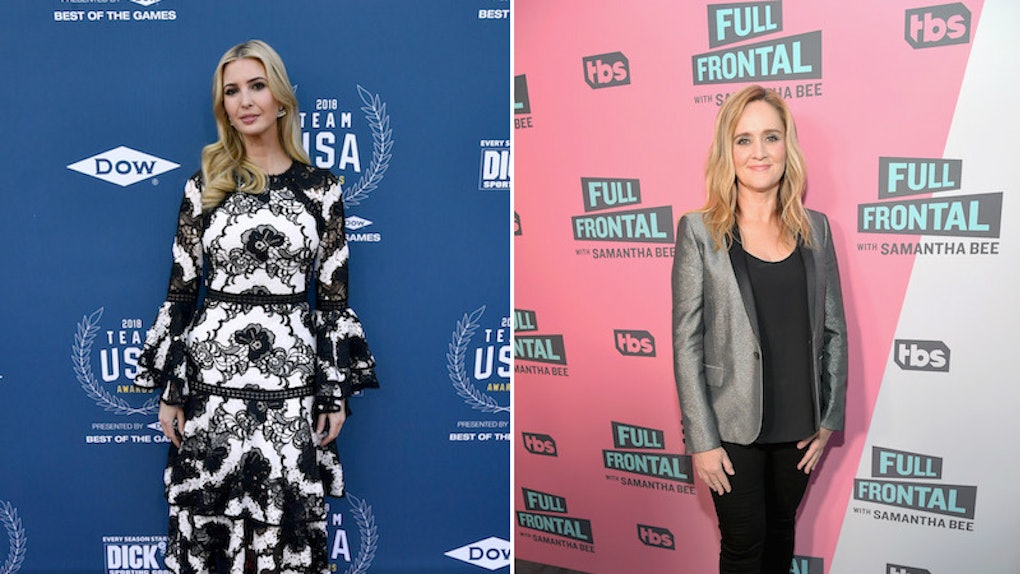 There are few things more gratifying than a grade-A Twitter takedowns. But, there's a way to respond on on Twitter, and then there's Sally Field's way to respond on Twitter. Because let me tell you, Sally Field's tweet about Ivanka Trump and Samantha Bee has my jaw on the floor. Mostly because Field is the last person I thought would sneak in a comment on the ordeal.

By now you've probably already heard that Bee called Trump a "feckless c*nt" during an episode of Full Frontal on Wednesday, May 30. Bee's comment was in response to Trump's highly insensitive May 27 tweet that showed the first daughter holding her child while the Trump administration pursues a policy of intentionally separating migrant children from their families at the southwest border. While everyone on Twitter weighed in with their opinions on the comment, Field snuck in there with a little woman power tweet on May 31 in support of Bee. Kinda.

The actress agreed that it was wrong of Bee to call Trump a "c*nt," but maybe not for the reasons we were all expecting to hear.

"I like Samantha Bee a lot, but she is flat wrong to call Ivanka a c*nt," wrote Field. "Cunts are powerful, beautiful, nurturing and honest."

It's kind of hard to think of the Flying Nun calling anyone out, and definitely not if the C-word is involved. I was in no way expecting her to side with Trump (not commentary from her crossed my mind at all really), but this is doing the most.

If you haven't already guessed, the responses to Field's tweet were many and varied. Some championed Field for her ability to turn a phrase, so to speak, by taking a term that's usually used to demean women and turning it into a positive thing.

While other folks didn't feel quite the same way...

After Bee's comments, the White House pretty much called for Full Frontal to be cancelled. On Thursday, May 31, Sarah Huckabee Sanders said that Bee and her comments are "not fit for broadcast," according to CNN. She said,

The collective silence by the left and its media allies is appalling. Her disgusting comments and show are not fit for broadcast, and executives at Time Warner and TBS must demonstrate that such explicit profanity about female members of this administration will not be condoned on its network.

What's that saying, the pot calling the kettle black? If people have a problem with Bee directing the word "c*nt" at another woman, I understand. However, the White House has no business condemning someone for "disgusting comments" against women, considering what President Donald Trump has said about women.

For instance, when the now president said, “A person who is flat-chested is very hard to be a 10," on a 2005 appearance on Howard Stern's radio show. Or how about that time on Season 13 of Celebrity Apprentice when he told contestant Brande Roderick, "must be a pretty picture, you dropping to your knees." Of course let's not forget the infamous "grab 'em by the p*ssy" line from the 2005 Access Hollywood tape.

Bee, however, apologized for her comments. In a May 31 tweet, the Full Frontal host wrote an apology to Trump and to her viewers. She wrote,

I would like to sincerely apologize to Ivanka Trump and to my viewers for using an expletive on my show to describe her last night. It was inappropriate and inexcusable. I crossed a line, and I deeply regret it.

Samantha Bee has taken the right action in apologizing for the vile and inappropriate language she used about Ivanka Trump last night. Those words should not have been aired. It was our mistake too, and we regret it.

While Bee's anger towards Trump's tweet was warranted given the poor timing, rage might have gotten the best of her. Just one word edited out could've saved her the trouble. But say what you will about Field's response, it was some major unexpected shade. Who even are you, Mrs. Gump?

More like this
Daily's Poptails Frozen Alcoholic Pops Are Wine-Based, Fruity Treats
By Cianna Garrison
The Woman Behind @NorisBlackBook Is Serving Hilarious Kardashian Commentary On IG
By Lara Walsh
Why Can't I See Instagram Story View Counts? Here's The Deal
By Lara Walsh
Stay up to date