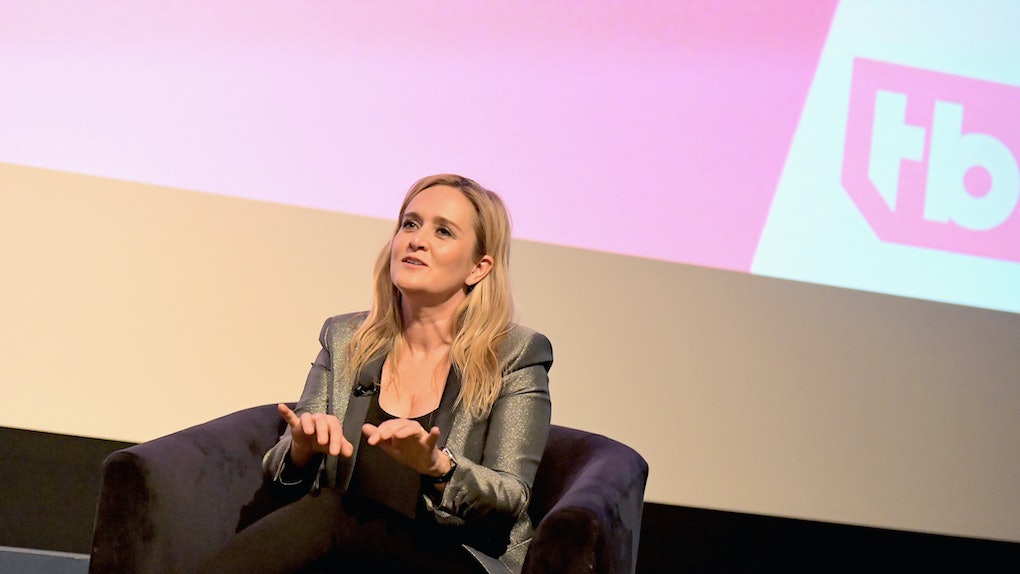 Samantha Bee was heated. On Wednesday night, May 30, the Full Frontal host tore into President Donald Trump's immigration policies and had criticism to spare for his daughter and close adviser, too. In the course of criticizing policies, Samantha Bee's immigration monologue about Ivanka Trump referred to the first daughter as the c-word, while imploring her to "do something."

The language used by Samantha Bee last night is vile and vicious. The collective silence by the left and its media allies is appalling. Her disgusting comments and show are not fit for broadcast, and executives at Times Warner and TBS must demonstrate that such explicit profanity about female members of this administration will not be condoned on its network.

I would like to sincerely apologize to Ivanka Trump and to my viewers for using an expletive on my show to describe her last night. It was inappropriate and inexcusable. I crossed a line, and I deeply regret it.

EARLIER: While alluding to the controversial news about both the Trump administration "losing track of" migrant children the government placed in the hands of sponsors and a "zero tolerance" policy that separates children from parents at the border, Bee said, "You know, Ivanka, that’s a beautiful photo of you and your child, but let me just say, one mother to another, do something about your dad’s immigration practices, you feckless c*nt!"

Bee was referencing a picture Ivanka Trump posted during Memorial Day weekend, which showed the White House adviser hugging her son. The photo prompted criticism from various people, like MSNBC's Joy Ann Reid, as an action that was tone deaf, specifically at a time when reports about how migrant children are treated dominated the news and social media.

"You’d almost never know her father’s administration, to which she is an adviser, was brutally separating migrant children from their asylum-seeking parents and lost track of 1,500 of them," Reid tweeted in reaction to the photo.

On Wednesday night, it was Bee's turn to express her outrage, and she did so while suggesting incest between the president and his daughter.

"He listens to you," Bee said. "Put on something tight and low cut and tell your father to f*cking stop it. Tell him it was an Obama thing and see how it goes, OK?"

According to Bee's own standards, she went too far by using that language about Ivanka Trump, which arguably undermined the overall argument she was making. Just consider what Bee said in December 2016, during the last days of President Barack Obama's tenure, when she welcomed conservative host Glenn Beck onto her show to talk about how to prepare for the Trump era.

"I think our future is going to require a broad coalition of non-partisan decency," Bee said. "It’s not just individual people against Donald Trump. It’s all of us against Trumpism. So I think it’s actually important for us to reach into places where we wouldn’t normally reach."

It's safe to say that calling Ivanka Trump a c*nt isn't the best way to show decency. In fact, I'd argue that the monologue inflicted the type of damage that Beck said Bee didn't want to do.

Yes, the most important subject here is the mistreatment of children and immigrants. But if making a convincing argument against policies during the Trump era does require building a "broad coalition of non-partisan decency" — as Bee rightly pointed out before the Trump administration took off — establishing new norms for how you can talk about political opposition, especially when there's a suspicion that people in the media pick and choose who's fair game to target, is not the way to do that.

Bee's monologue has obvious consequences, too. Giving her a free pass means establishing a double standard: that certain things can be said about women if there's a "good" enough reason. But "good" is subjective.

Just imagine a conservative commentator in the year 2022 calling President Kamala Harris the c-word for what that commentator thinks is a "good" reason. How easy will it be for people to dismiss the outrage over that moment if the outrage is coming from people who said nothing when Bee made a wink-wink-nudge-nudge joke about the current president's relationship with his daughter?

Additionally, as many worry that supporters of the president implicitly endorse his behavior (and language about women), the same can be said for supporters of political commentators on both side of the aisle. So how about if it now becomes more common for women to be called certain names in public?

Cheering on Samantha Bee calling Ivanka Trump c*nt does little but allow a show host to vent, while undermining her argument in the process — probably convincing no one who disagrees with her — and creating a double standard that jeopardizes the credibility needed for future battles. It's just not worth it.