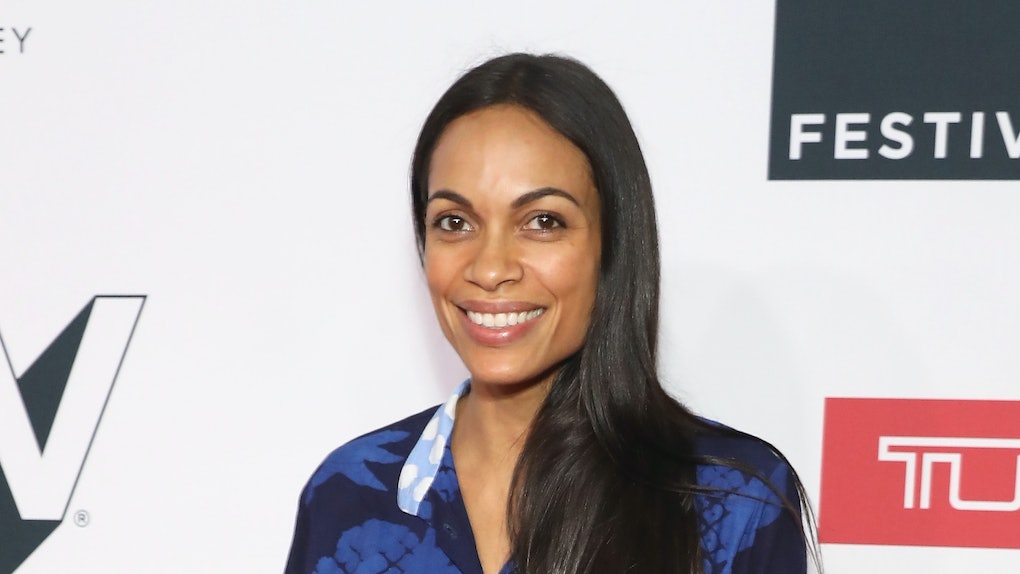 Rosario Dawson's Take On What Anxiety Really Feels Like, & How To Navigate It, Is Spot-On — EXCLUSIVE

I'll be honest: When I hopped on a call with Rosario Dawson earlier this week, my intention was to ask her a few standard questions about her partnership with Quaker. A few minutes into our conversation, though, the Zombieland actress flipped the script and asked me about my aspirations for 2019, and I found myself opening up to her about some of the mental health struggles I've been dealing with recently, as if Dawson and I were old friends. Truth be told, Rosario Dawson’s take on anxiety made me feel so heard. It was as if the invisible wall that seemingly divides Hollywood's world and my own came crumbling down, and there we were: two people just trying to live in the here and now, without the need to fixate on tomorrow. After all, there’s no day but today, and Dawson helped me realize that anxiety has a way of making you lose sight of that.

Dawson recently teamed up with Quaker Oats on a three-part video series, in which the 39-year-old actress sat down with a registered dietitian to talk about the health benefits of oatmeal. Each clip is about two minutes long, and features Dawson being schooled about the heart, energy, and digestive benefits of her favorite breakfast. Using what she learned from the RD, Dawson then took to the streets and educated passersby on the versatility of oats — from enjoying a sweetened bowl for breakfast, to swapping rice for oats in savory dishes — and how incorporating them into your diet can benefit you in ways you never would have guessed. The finished product is informative, fun, and personable — which is exactly how I would describe my own one-on-one with Dawson.

Dawson really did work all kinds of surprises into our exclusive interview for Elite Daily, like how she loves pouring Sriracha over breakfast oats (yes, it’s a thing). But what really stood out to me about the former Rent star was her willingness to be vulnerable to a total stranger. “I never knew I had anxiety,” she tells me. “[I thought] it was just ‘stress.’”

According to statistics from the Anxiety and Depression Association of America, anxiety disorders are among the most common mental health illnesses across the United States, with generalized anxiety disorder (GAD) affecting 6.8 million adults in the U.S. per year. To clarify, Dawson and I did not discuss whether or not she has GAD (which is a clinical disorder), or occasional anxiety — which the National Institute of Mental Health considers an “expected part of life.” But, regardless of whether someone experiences occasional or clinical anxiety, the emotions that come along with it can have a very real effect on one's quality of life. The hope is that you can acknowledge those feelings for what they are, and still live your life the way you want to.

"We’re taught to just push through anxiety," Dawson tells me. "But if there were alarms going off in any other way, you would respond to them." Being able to identify when something's wrong, acknowledging it, and being there for yourself in this way, Dawson adds, "just puts you in a whole other kind of space."

Dawson may not be a doctor or a mental health expert, but she definitely has the right idea here. According to the Mental Health Association of San Francisco, one of the first major steps to working through the emotions that come with anxiety is to simply recognize them, which “can be very empowering because once you name the problem you can go about solving it. You open the door to learning how to feel better,” as per the organization's website.

Toward the end of our impromptu heart-to-heart, Dawson left me with a little food for thought (and I'm not just referring to the oats): Anxiety, she tells me, is one of those things that "makes time disappear on you." In an anxious moment, your body can respond in a number of ways — per the Mayo Clinic, this can include things like restlessness, heavy breathing, sweating, shaking, etc. — and the surge of fixation can make you feel like you're doing something when, in reality, you're "just kind of being caught [in it]," Dawson says. Having the upper hand, however, and the ability to hone in on the anxiety, honor it, and live life the way you want to anyway, is the most powerful place from which the healing process can begin, Dawson tells me.

Navigating anxiety is one thing. But living in the moment, being mindful, and being grateful, can truly make all the difference, according to Dawson. "I have just so much gratitude right now. It’s one of those special years — sweet 16, 40, those big numbers people look forward to," Dawson, who will celebrate her 40th birthday in May, tells Elite Daily. "I always go back to that quote: 'The journey is the destination.' I just want to take in with gratitude all the things I’ve gotten to do, what I am doing, and what I get to do and who I get to share that with."