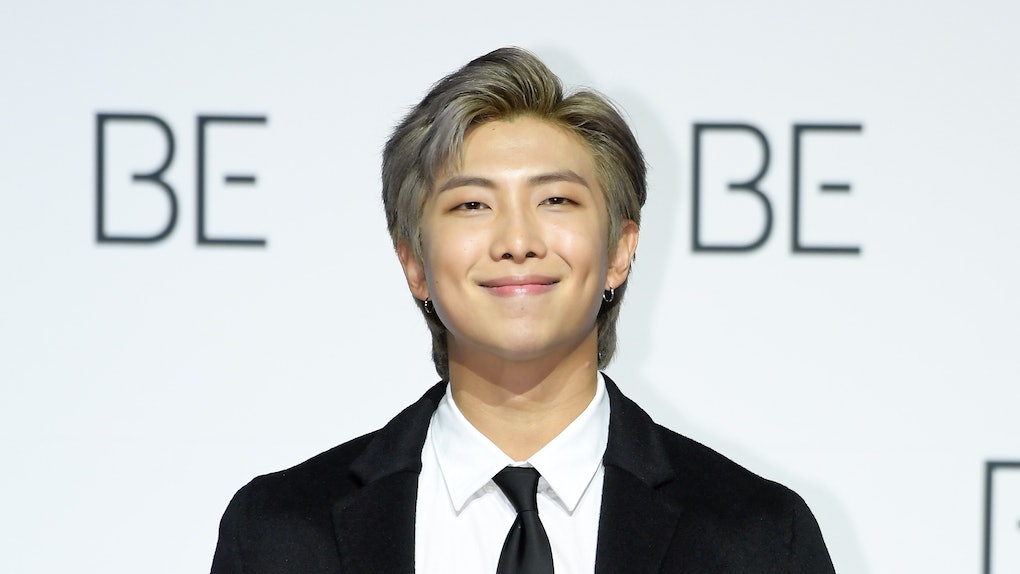 Just days after announcing BTS' next comeback with "Butter," RM dropped his collaboration with the Korean singer and songwriter eAeon called "Don't" on Friday, April 30. The two previously worked together on "badbye," which is a track from RM's 2018 mixtape, Mono. Fans were so happy about them teaming up again, they trended hashtags like #DontOutNow and #TurnOnTheMoonRM on Twitter to celebrate the release of the song, which comes from eAeon's latest album Fragile. If you're wondering what RM & eAeon's "Don't" lyrics mean in English, know the message behind them is an emotional one.

ARMYs always get so excited whenever a member of BTS does a solo project. Outside of BTS, RM has collaborated with artists like Tiger JK on "Timeless" and Younha on "Winter Flower." RM admired both singers for a long time before he finally got a chance to work with them.

The same goes for eAeon, who's part of the group called Mot. Him and RM's friendship history reportedly goes as far back as 2016, and RM's even recommended Mot's songs a few times to ARMYs on Twitter. Finally, after years of knowing each other, eAeon and RM collaborated for the first time on "badbye" in 2018.

On April 27, they shared a music video teaser for their second collaboration on YouTube. The start of the video showed a young couple happily in love, but then it transitioned into the two separated and feeling lost without the other. The duo dropped their "Don't" music video on Friday, April 30, and it took fans on an even more emotional rollercoaster ride.

RM and eAeon's "Don't" lyrics make the story so much sadder. The song is about knowing it's time to end a relationship but you're still trying to make one last effort to save it. You beg the other person to stay with you because you love them and have built a home together. "Don't leave/ There's no place like home/ Don't destroy us," the two say in the chorus.

Check out the full lyrics below.

Don't talk, not yet

I know what you're about to say

Please, don't do that

Our home is here, it's us

We've been through worse

This can't be the end of us

So many things left undone

So much would collapse

It'll break you too

Don't throw away everything

What color are waves

White as snow when they break

Did you survive the drift ok

Still as a pebble, could you stay

Turn on the moon

In my small chimney, could you stay

Don't take away the name only you know

I hate any wildflowers

Don't break a heart into two

I know it's not over yet

I know you want me to hold you too

Don't break a heart into two

So much would collapse

It'll break you too