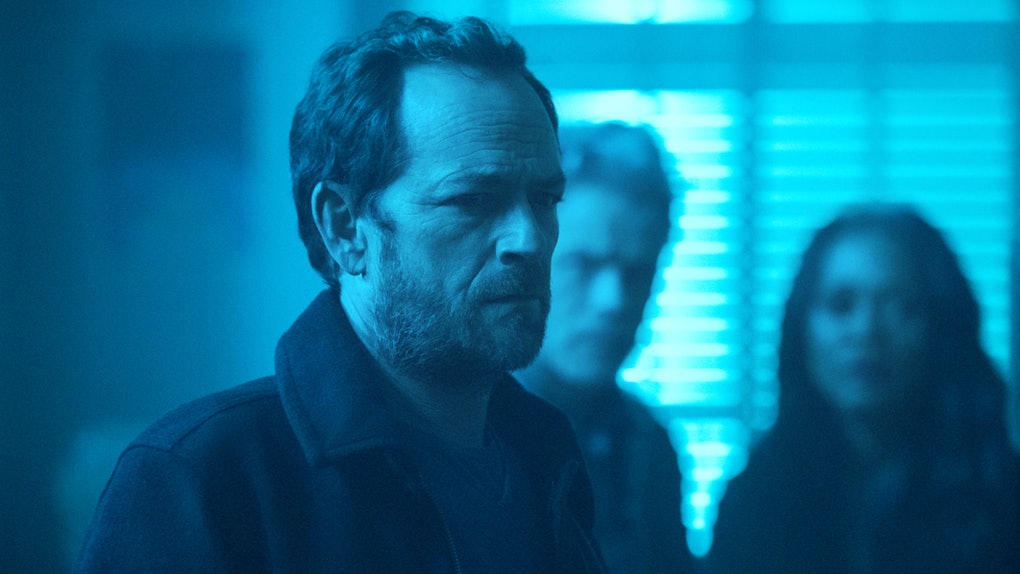 Ever since Luke Perry's sudden death at the beginning of March, the looming question among Riverdale fans has been how the series will handle the sudden disappearance of Perry's character Fred Andrews. In the eight episodes that have aired since Perry's death, the series has still yet to write off the character, but showunner Robert Aguirre-Sacasa confirmed after the Season 3 finale that Riverdale will address Fred Andrews' disappearance in Season 4 at the very beginning of the new run of episodes.

Luke Perry's unexpected death shocked everyone when he was pronounced dead on Monday, March 4 after suffering a massive stroke at his home days earlier. Perry's team provided Elite Daily with a statement at the time:

Actor Luke Perry, 52, passed away today after suffering a massive stroke. He was surrounded by his children Jack and Sophie, fiancée Wendy Madison Bauer, ex-wife Minnie Sharp, mother Ann Bennett, step-father Steve Bennett, brother Tom Perry, sister Amy Coder, and other close family and friends. The family appreciates the outpouring of support and prayers that have been extended to Luke from around the world, and respectfully request privacy in this time of great mourning. No further details will be released at this time.

The sudden and unexpected death also brought up questions about how his series Riverdale would be affected. Luke Perry played Archie's father Fred Andrews since the series premiered, and his death occurred while the show was still in production on its final handful of episodes for Season 3. Perry continued to appear as Fred posthumously in a few pre-recorded scenes in the weeks following his death, until his final appearance aired in the fourth-to-last episode of the season.

Despite Luke Perry no longer appearing in the show, Riverdale still has not yet written Fred Andrews out. For the final three episodes of the season, Archie simply mentions that his dad is out of town for an unspecified reason, and his estranged mother Mary Andrews (Molly Ringwald) takes a trip to Riverdale to fill in on the parenting duties.

Showrunner Roberto Aguirre-Sacasa told E! News that he and the show's writers intentionally postponed writing Fred Andrews out of the show, both because the final episodes of the season had already been so heavily plotted and to be sure that they get the crucial moment right. He promised that the explanation about what will happen to Fred Andrews is coming at the beginning of Season 4, though:

When Luke passed, it was such a shock, and it was devastating and we kind of have to deal with the emotion of that, and then you have to figure out everything that comes next. And we'd already pretty much plotted out the rest of the season. We'd written a bunch of the rest of the season and it felt like rather than try to squeeze something—and for me, something that's so monumental and so defining... and we didn't know how we wanted to deal with it. You know, you're just reacting. So we thought rather than do it quickly or do it wrong, let's take our time, let's figure it out, and let's deal with it at the beginning of Season 4.

The CW has already picked up Riverdale for its fourth season, which is expected to begin airing in October.