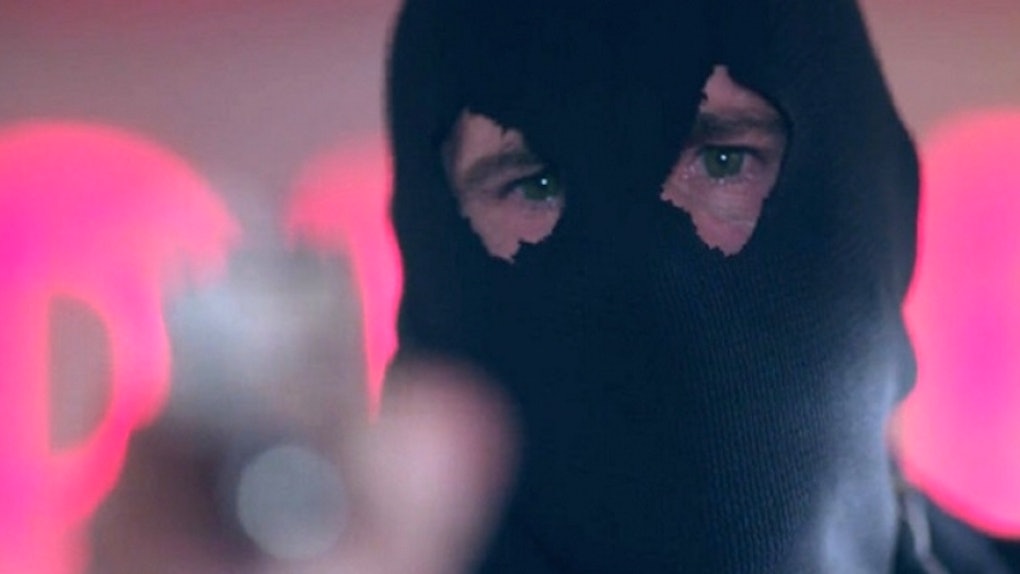 Welp, we've finally got our Black Hood, and... most Riverdale fans are pretty disappointed in the big reveal. After weeks of fans theorizing about who could be terrorizing Riverdale from under that hood, the show's unmasking on Wednesday night hit with a thud among viewers who were expecting a much more twisted, involved story behind the serial killer. And actually, there are a bunch of things that don't add up about the Black Hood's revealed identity. Let's break down all the plot holes about the Black Hood reveal on Riverdale that seem to prove there must still be another Black hood out there. Spoiler alert: Obviously, don't read on until you've seen Riverdale Season 2 Episode 9 "Silent Night, Deadly Night" and watched the Black Hood reveal.

OK, now that the spoiler alert is out of the way, I can finally complain about it openly: There's no wayyy Mr. Svenson is the actual Black Hood! Or if he is, then the Riverdale writers really messed things up this season. I mean, Mr. Svenson was just introduced to the show literally two episodes before the big Black Hood reveal — he was so new and minor that it took me a good minute to even realize that it was his face under that hood when Sheriff Keller unmasked him. And then they needed to include an entire scene of Betty explaining Mr. Svenson's whole motivation, which ended up being a pretty nebulous mixture of guilt and madness over having sentenced an innocent man to death years ago.

Honestly, pretty much every fan theory about the Block Hood that I had read before the actual reveal was more satisfying than finding out it was just the random janitor — even that crazy one about Kevin Keller would have been better! But fans should remain hopeful, because it really does not seem like the Black Hood is actually out of the picture yet. Mr. Svenson as the sole Black Hood just doesn't make sense for a number of reasons, and most fans have been theorizing about the possibility of two Black Hoods for a while now. Let's go over all the proof that we have seen that there's a Black Hood that isn't Mr. Svenson still out there:

After Veronica and Archie learn about Mr. Svenson's secret past with the Riverdale Reaper, he of course becomes an immediate suspect. The two confront the janitor, but Archie winds up being convinced that Svenson is not the Black Hood after looking into his eyes. As we learned in the season premiere, the Black Hood that shot Archie's dad had strikingly green eyes, a trait that Archie has remained fixated on. The fact that Archie immediately knew Svenson's eyes did not match the Black Hood's seems to be the clearest nod from the show that the man who shot Fred Andrews is still out there.

Then comes the issue of how Mr. Svenson would find his "sinful" victims. Betty vaguely explained this part away by just saying something like "Oh yeah, he was always lurking in the shadows at school and probably overheard stuff," which would work for him knowing about Mitch and Midge's drug purchase and Mrs. Grundy's affair with Archie, but how would he know about Fred Andrews and Hermione Lodge's affair? Sure, you can argue that Archie or Veronica may have talked about their parents' affair at school at some point, but it would seem that if Mr. Svenson was the Black Hood, then the first crime would have been something much closer to Riverdale High. Add that to our first plot hole, and it seems even more unlikely that Mr. Svenson was the person who shot Fred Andrews.

I think the major reason fans were so confused by Mr. Svenson being under the hood is because he really isn't connected to Betty Cooper at all, and that connection has become an integral part of the Black Hood's persona. We've seen the Black Hood call Betty a bunch of times, and go on and on about how similar the two of them are. I mean, sure, Mr. Svenson knows Betty from Riverdale High, but from Betty's intimate conversations with the Black Hood, most viewers assumed the killer would be someone much closer to Betty. Mr. Svenson was introduced with a suspicious stalker-y edge, but he seemed more interested in Josie McCoy than anyone else. Plus, Svenson was ready to shoot Betty in the head to bury Archie alive right before he was unmasked, which doesn't seem like something the real, Betty-obsessed Black Hood would do.

To really drive the Betty-Black Hood connection home, remember when the killer sent Betty that puzzle that she had to use her favorite childhood book to solve? That moment convinced fans that the Black Hood had to be someone who has known Betty since childhood; someone who has been close with her for a really long time. Mr. Svenson just doesn't fit the bill.

Maybe Svenson was behind some of the Black Hood crimes, but it seems pretty clear that the person who keeps calling Betty and shot Mr. Andrews still has yet to be unmasked.