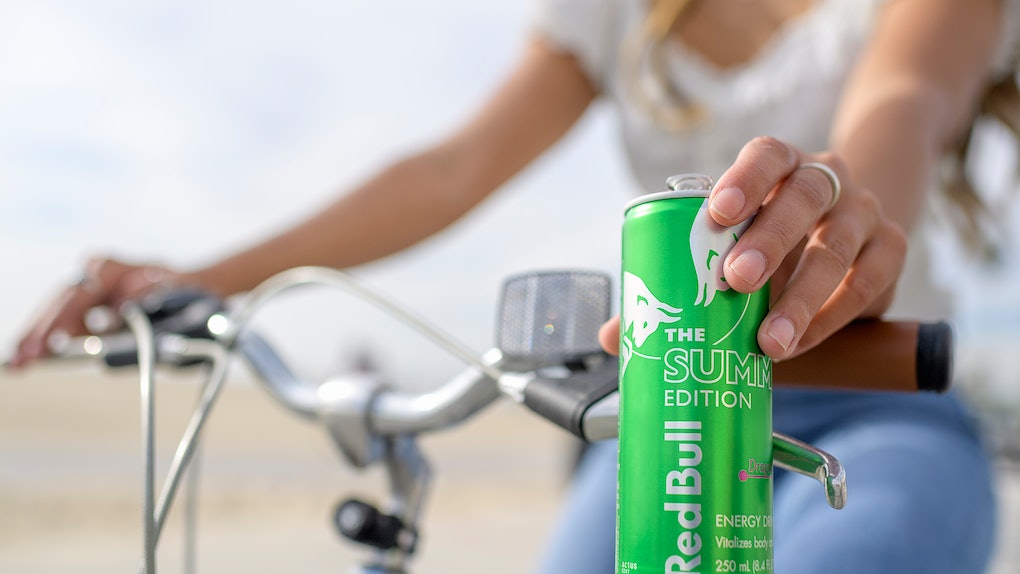 Get ready to swap out your mid-day coffee for a Red Bull soon because the energy drink company recently announced its summer offering. Fans of the carbonated pick-me-ups anxiously await the release of the seasonal flavor to sip through the hot months, and this time, it's coming well before its usual debut. Get hype for a tropical sip because Red Bull’s Summer Edition 2021 flavor is Dragon Fruit, and it sounds refreshing AF.

The energy drink brand typically releases its Summer Edition sips in late April, but the Red Bull Summer Edition flavor for 2021 is hitting the shelves a month earlier, thanks to its increasing popularity. Starting on Monday, March 29, you can get Red Bull's Dragon Fruit flavor for a limited time at Walmart in 8.4-ounce or 12-ounce matte green cans for $2.49 and $3.39, respectively. You'll also be able to score the sip early from select convenience stores like ExtraMile and Wawa. Following the early launch, the caffeinated beverage will release to other retailers nationwide on Monday, April 26.

If you're wondering what it will taste like, you can expect notes of red berries, plum, and a hint of florals. The flavor was inspired by the dragon fruit, also called a pitaya, a tropical fruit from a variety of cactus plant. Dragon fruit is named for its tough, pink skin, which has a scale-like texture. The inside is either a white, red, or purple flesh and features little black seeds similar to kiwi fruit. The taste is often compared to a combination of kiwi and pear.

The Red Bull Summer Editions of the past have included the fan-favorite Watermelon from 2020, 2019's Red Bull Beach Breeze, and the Red Bull Coconut Berry flavor, but this is the first Dragon Fruit sip from the brand.

While you may drink your Red Bull straight from the can, you might also want to consider pouring it into a glass because the Dragon Fruit energy drink features a 'Gram-worthy magenta color. Red Bull also released a couple of mocktail recipes you can make with the Red Bull Dragon Fruit sip to show off its pink shade.

When heading out to grab the new Red Bull Summer Edition 2021 flavor, make sure to practice the latest guidance from the CDC on social distancing and mask-wearing.