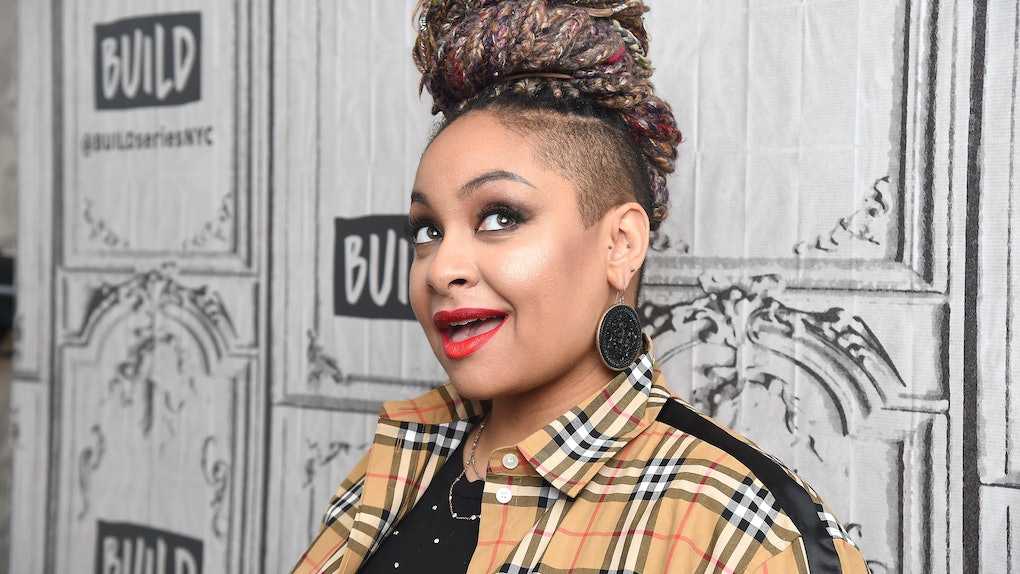 Raven-Symoné has never been one to shout it from the rooftops when she's in a new relationship. She's always been private about her personal life, which explains why Raven-Symoné’s reported dating history is so short and sweet. So on June 18, when the actor suddenly announced on Instagram that she was not only in a relationship, but had actually gotten married to her now-wife Miranda Pearman-Maday, it was a double shock — albeit a really fun and exciting one.

The marriage marks a happy ending for the star, who, in a 2016 interview for the It Got Better docuseries, said she never thought she'd be able to come out. “I never thought I would … because my personal life didn’t matter,” she explained. “It only mattered what could be sold as part of the Raven-Symoné brand.” The star admitted realizing she was gay at age 12, yet she pushed herself to try and be attracted to boys, thinking she would eventually marry one. It wasn’t until she went to college at the Academy of Art University in San Francisco that she was finally able to fully be herself and embrace her sexuality.

Here are the people that the Raven’s Home star reportedly dated along the way.

Raven-Symoné reportedly dated her That’s So Raven co-star Orlando Brown, who played her best friend Eddie on the show, in 2003. While Raven-Symoné has not made any comments about the reported relationship, Brown confessed to still having feelings for her as recently as 2018, going so far as to have her face tattooed on his neck. (She was unimpressed by the gesture.) In a 2018 interview on Dr. Phil, Brown revealed that he intended to ask Raven-Symoné to marry him. (Elite Daily reached out to Raven-Symoné’s rep for comments on her reported romance with Brown, but did not hear back by the time of publication.)

Brown's not the only That’s So Raven co-star Raven-Symoné was reportedly connected to. She and Lil J (who Raven-Symoné now works with on the series reboot Raven's Home) reportedly dated for four years, from 2003 to 2007. (Elite Daily reached out to Raven-Symoné's rep for comments on her reported romance with Lil J, but did not hear back by the time of publication.)

Following her reported relationship with Lil J, Raven-Symoné was linked to her Empire co-star Jussie Smollett. In 2015, she set the record straight, telling The Hollywood Reporter they were just friends. “We never had a romantic relationship, but we definitely, living in method-acting worlds, acted how we normally would. It was very natural and easy," she told the publication. "I'm happy that he was as excited to work with me as I was excited to work with him. We had never really worked together. We did a little music together prior to him being on the show, but as my best friend, normally we act like that when we're out in a club having fun.” Smollett also came out as gay on The Ellen DeGeneres Show in 2015.

Raven-Symoné came out on Twitter while celebrating marriage equality in August 2013, saying, “I can finally get married! Yay government! So proud of you.” The following year, in October 2014, she opened up about her relationship with model and actor AzMarie Livingston in an interview with Oprah Winfrey. “I’m in an amazing, happy relationship with my partner, a woman. On the other side, my mother and people in my family, they’ve taught me to keep my personal life to myself as much as possible, but I am proud to be who I am and what I am,” she told Winfrey, although the star resisted labeling her sexuality. “I don’t need language. I don’t need a categorizing statement for it. I don’t want to be labeled gay. I want to be labeled a human who loves humans. I’m tired of being labeled.” Raven-Symoné and Livingston split in October 2015.

Taking a look back at Raven-Symoné's dating history really puts into perspective how surprising it is that she shared her marriage update so publicly. In her Instagram announcement, she revealed she had tied the knot with Miranda Maday (now Pearman-Maday) in a private backyard ceremony. “I got married to a woman who understands me from trigger to joy, from breakfast to midnight snack, from stage to home. I love you Mrs. Pearman-Maday! Let’s tear this world a new a**hole!!! I’s married NOW."

The marriage announcement marked the first time that either Raven-Symoné or Perman-Maday had posted about their relationship, so everything from how the two first met and fell in love to how they ended up walking down the aisle is still a mystery. But advocating for her privacy, being proud of her identity, and keeping us all on our toes? Well, that’s so Raven-Symoné.