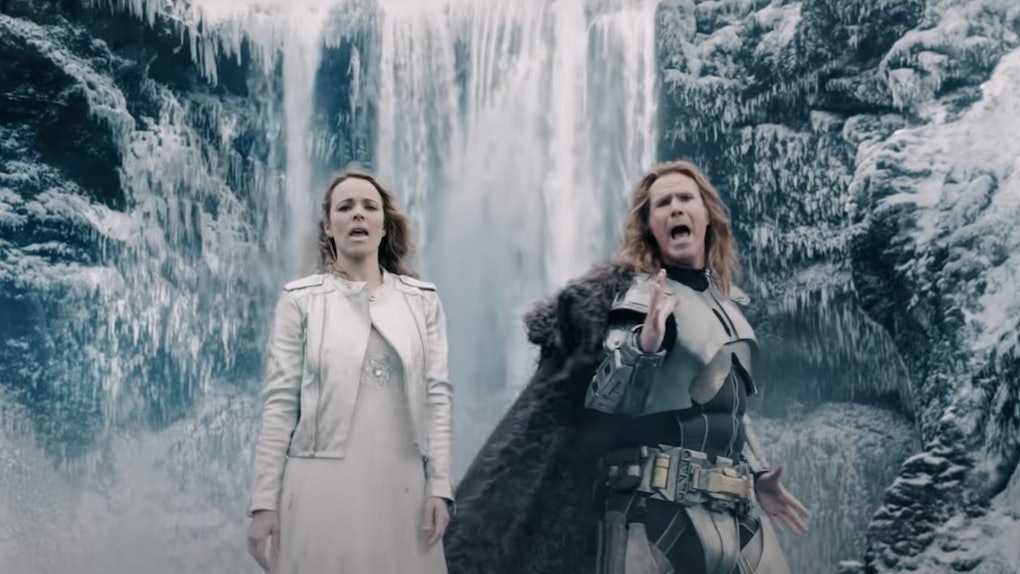 Although the actual Eurovision Song Contest has been canceled this year due to the coronavirus pandemic, fans of the over-the top European musical competition can still look forward to some zany performances this summer thanks to Netflix's new movie. Eurovision Song Contest: The Story of Fire Saga will star Will Ferrell and Rachel McAdams as an Icelandic singing duo chosen to represent their country in a fictional version of the annual event, and Netflix released a sneak peek to let fans know what to expect. As expected, Rachel McAdams and Will Ferrell's Eurovision music video is pretty goofy. But surprisingly, it's also an actual banger.

Netflix dropped the first look at Eurovision Song Contest on Saturday, May 16, releasing the music video for Ferrell and McAdams' parody song "Volcano Man." The video features Ferrell doing his best Thor cosplay with long blonde hair and a viking helmet, while McAdams glitters in flowing white gowns. The two are playing musicians Lars Erickssong and Sigrit Ericksdottir, and belt out an ode to a volcanic protector while running around a sprawling Icelandic setting.

It's pretty clear Ferrell is using his real voice in the recording, but McAdams' part is actually sung by Swedish pop star Molly Sandén, who participated in 2006's Junior Eurovision Song Contest. With an actual pop star behind the chorus and producers Gustaf Holter and Christian Persson responsible for the beat, it's no wonder "Volcano Man" is so much catchier than an ordinary spoof song.

The best part is, there are more songs like "Volcano Man" coming very soon. The soundtrack for Eurovision Song Contest will contain more original songs written for the film, and will be released alongside the movie when it drops on Netflix on June 26. It's not yet clear which of the other cast members will be singing in the movie, but since Demi Lovato is one of the film's stars, fans can almost definitely expect a musical number or two from her character. The rest of the lead cast includes Pierce Brosnan, Dan Stevens, and Graham Norton.

Originally, Eurovision Song Contest was slated to be released in mid-May to coincide with the real-life 2020 Eurovision Song Contest, but after the event was canceled in response to the coronavirus pandemic in March, Netflix pushed the film back a month. Until the new release date, I'm pretty sure "Volcano Man" is going to be stuck in my head 24/7.

If you think you’re showing symptoms of coronavirus, which include fever, shortness of breath, and cough, call your doctor before going to get tested. If you’re anxious about the virus’ spread in your community, visit the CDC for up-to-date information and resources, or seek out mental health support. You can find all Elite Daily's coverage of coronavirus here.

More like this
'Selena: The Series' Part 2: Netflix Release Date, Trailer, Cast, & More News
By Dylan Kickham
'He's All That': Premiere Date, Cast, Trailer, Filming News, & More
By Dylan Kickham
Is Netflix Making A 'To All The Boys' Spinoff Series About Kitty? Here's The Tea
By Rachel Varina
Stay up to date