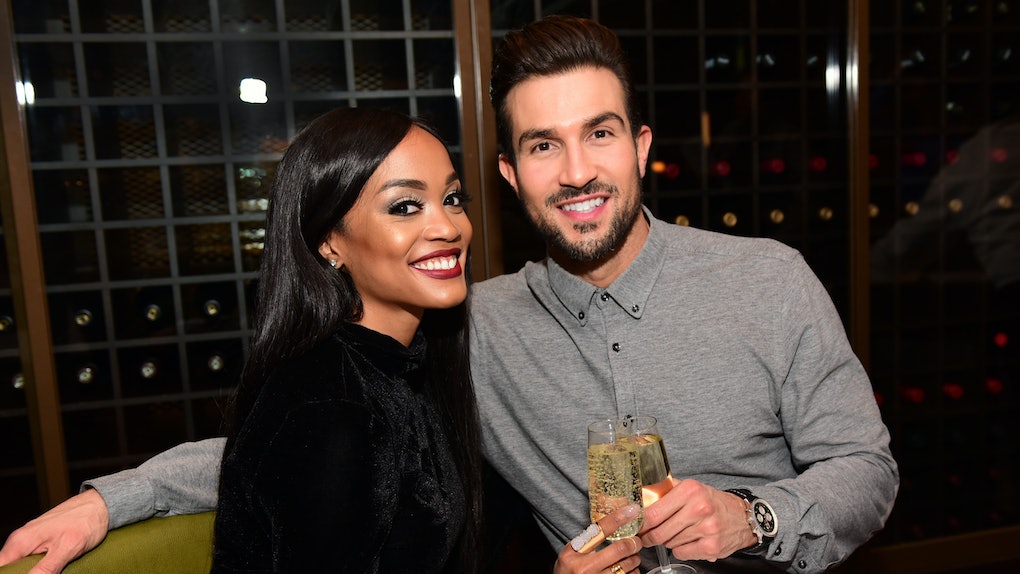 Rachel Lindsay Says Her Dog Helped Her Pick Bryan & TBH, I Can Relate

Dogs are [wo]man's best friends, and in former Bachelorette Rachel Lindsay's case, she was the franchise's first leading lady to have her own canine sidekick featured on the show. Her dog Copper tagged along on her first one-on-one date of the season, but Copper actually played a bigger part in Rachel's relationship with her now-fiancé Bryan Abasolo than audiences may think. Rachel Lindsay says her dog helped her pick Bryan, and TBH, I hope my dog picks my future husband for me.

Rachel's dog Copper won the ultimate first impression rose when he hobbled onscreen with a broken leg early on in Season 13 of The Bachelorette, but Rachel just revealed that Copper sensed which of her final few men were right for her. While at a recent charity event, she explained the role Copper played in her decision to be with Bryan at the end of the show. Sharing that Copper was with her when she went on hometown dates and that he sat right at Bryan's feet at his Miami home, she told PEOPLE:

Basically, Copper made the decision!... I am right next to [Bryan], and [Copper] walks up and sits down at his feet and I was like, ‘I hear you, Copper. That is the one.'

Rachel noticed that Copper hadn't responded to the other men that way, and seeing as how adoring she was of him on The Bachelorette, it's clear that she valued his opinion in whichever way he offered it. The two's special bond likely emerged from the traumatic way Copper came into Rachel's life. She adopted him after her sister found Copper abandoned on a road, and doing so changed her life. Rachel told the magazine:

I remember people asking, me, ‘How long have you had him?’ And I would be like, ‘I’ve had him for two weeks.’ And they would say, ‘It’s like you have had him forever.' So, it’s like, he needed me, I needed him, and we found each other. I know it sounds so weird to talk like that for someone who may not be a dog owner. This dog completely changed me.

Rachel has been clear that Copper is still one of the top men in her life, writing in her Instagram bio that her "loves" include "Bryan, Copper, and fam." I wouldn't be surprised if Copper plays a part in the couple's wedding, which Rachel hopes will happen in the spring of 2019. Although Rachel and Bryan having a televised wedding is ultimately ABC's decision, they're open to the opportunity, and we're definitely overdue for a TV wedding of a franchise lead. Weddings of Bachelor in Paradise couples are obviously cute, but we need a bonafide Bachelorette wedding soon to legitimize the franchise even more.

As for Copper, I have my fingers crossed that his leg has healed in the year and a half or so since the filming of Rachel's Bachelorette season and that he's fully prepared to carry out ring bearer duties at this wedding. But then again, it'd be adorable to see Copper's little injured hop down the aisle. I've figured out what Becca Kufrin's season is missing, and it's a beautiful dog who trucks on despite a personal obstacle.