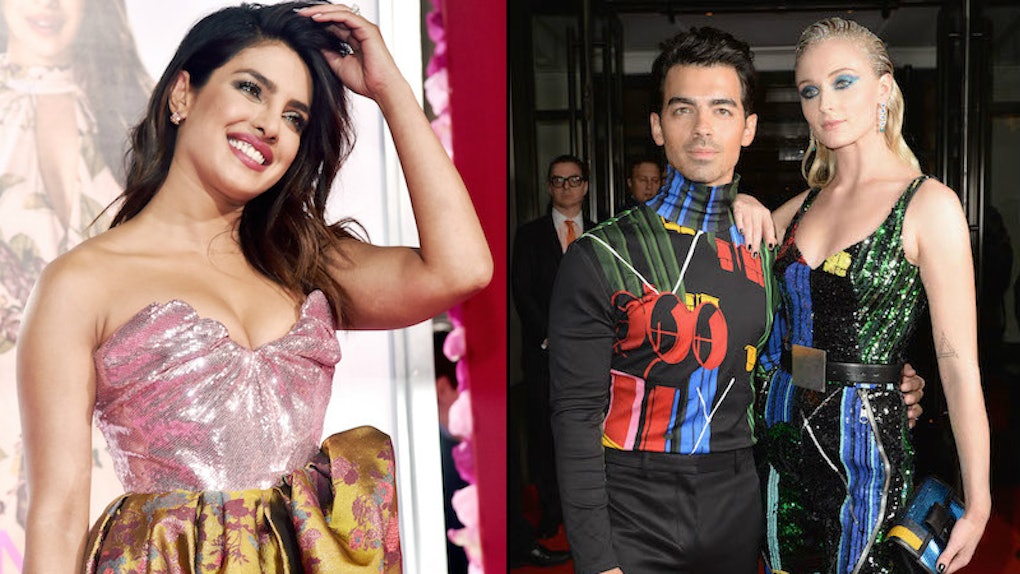 If you're still not over the fact that Joe Jonas and Sophie Turner tied the knot last week with an impromptu ceremony in a Las Vegas chapel after the Billboard Music Awards, then join the club. I mean, the details were just too good: Dan + Shay played "Speechless" as Turner walked down the aisle, an Elvis impersonator officiated, the pair exchanged Ring Pops, and Diplo livestreamed the whole thing. So freaking rockstar. And now we have Priyanka Chopra's story about Joe Jonas and Sophie Turner's surprise wedding and how the whole madcap happening came to be, and it turns out the lead-up to the big event was just as wild as the nuptials themselves!

Chopra — who is Joe and Sophie's sis-in-law in, case you didn't know — told Access that the DNCE frontman had the brilliant notion to give everyone in the Jonas family tiny invitation cards to hand out at the BBMAs.

"It was really funny," she explained. "We were at the Billboards, and Joe had this idea. He had these little black cards that we all got, and we were randomly inviting our friends, like, people that we met. We were like, 'Alright, we're gonna set up this wedding now, we're going to the chapel right from here, please arrive.'"

I don't know about you guys, but I'm totally in love with this whole concept. I mean, who needs fancy engraved invitations when you can just, like, hand out a bunch of tiny cards that you ordered on Etsy or something?

I do have a whole bunch of questions, though. Like, who do you think got these prestigious invites? Did any randos end up with one? Were they transferrable? Or are there people currently walking around with these cards in their pocket who didn't show up?

Also, is someone selling them on eBay? Because if they're not, they totally should be.

Anyhoo, Chopra went on to describe the ceremony as "awesome," which should come as a surprise to absolutely no one.

"We were driving around in this pink Hummer limo and I was outside the window," she revealed, and can someone please find me a picture of that moment, STAT?

"It was just epic," she continued. "I had these long hair extensions that I thought were gonna fly out the window. It was that kind of night."

"I call them Jophie," she explained. "Trust them to do that. It was so fun. That is Jophie."

I am totally using that phrase the next time something magical goes down. Oh, and if you're wondering what a "Jophie kind of night" looks like, behold:

Oh, and good news for Turner's on-screen sis Maisie Williams, who'd been tapped to serve as maid of honor but was MIA in Vegas. Chopra revealed in the interview that the Vegas ceremony won't be the only one for the newlyweds.

"They're gonna have this amazing, beautiful wedding, obviously," she said, before backpedaling. "Sh*t... was I not supposed to say that?"

I don't know, man. I don't know. But you can watch the whole amazing interview below. Which you def should, because it's so Jophie.

I know, I know — it sounds better when she says it.

More like this
Is Taylor Swift's "Mr. Perfectly Fine" About Joe Jonas? Sophie Turner's Instagram Has Fans Curious
By Brandy Robidoux
Alex Rodriguez's Instagram Story About Jennifer Lopez Before Their Breakup Is Gut-Wrenching
By Hannah Orenstein
'He's All That': Premiere Date, Cast, Trailer, Filming News, & More
By Dylan Kickham
Stay up to date