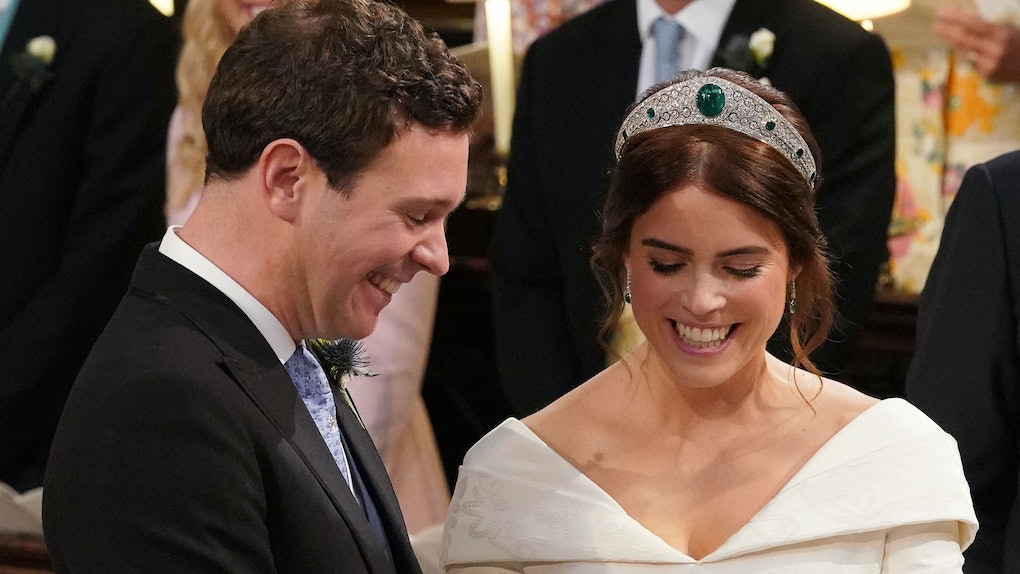 There are several ways a typical wedding differs from a royal one. For one thing, the Queen isn’t usually attendance and it's not broadcast on TV for the world to see. (Minor details.) But when a royal gets married, decisions regarding their post-nuptial name change take on a whole new level of importance. That's because, well, there are titles involved. Which is why Princess Eugenie’s new title after marriage is actually pretty ingenious — and not to mention sweet.

Back in March 2019, Princess Eugenie visited the Royal National Orthopaedic Hospital, and was announced as Princess Eugenie of York. However, according to the Court Circular (which is the “official record of past royal engagements”) revealed at a Buckingham Palace garden party on June 5, there has been a change to the married Princess’ title — one that acknowledges her husband, Jack Brooksbank, as well. Henceforth, her official title is “Princess Eugenie, Mrs. Jack Brooksbank.” Aww! What it lacks in brevity it makes up for in sweetness. Also note, this version means she keeps the title of Princess, while clearly embracing her husband's last name. In fact, the day after the couple were wed in October 2018, Eugenie wore a silk Jacket from designer Sam Douglas of the brand Gainsbourg which featured the embroidered words “Mrs. Brooksbank” in her own handwriting.

The decision to take her husband's name shouldn’t come as too much of a surprise to those who have been following all the royal wedding news. Back in July 2018, before the couple walked down the aisle, The Daily Mail reported that Eugenie wanted to take her husband's name as her title. Sources at the time told the publication that, “Eugenie couldn’t care less about titles and is perfectly happy to be Mrs. Brooksbank.” It's clear she got her wish and more!

The wedding was a long-time coming for the couple, who first met back in 2010 while on a ski vacation at the Verbier resort in Switzerland. They were introduced by a mutual friend, and for Eugenie, it was love at first sight. Rumors of an impending engagement kicked off in 2016 when Brooksbank joined Eugenie for a weekend at the Queen’s Scottish retreat, Balmoral. A source at the time reportedly told Sunday Express, “You could call this weekend a rite of passage for Jack. There is no way he would be invited to stay with the Queen unless he was being welcomed into the royal fold and the bosom of the family." But it wasn't until 2018, on a trip to Nicaragua, that he finally popped the question. In an interview with the BBC, Brooksbank described the setting where he proposed, and it was epic: "A beautiful volcano, summer setting, birds are flying." It was an experience Eugenie said was "really surprising even though we have been together seven years. I was over the moon." Needless to say, she said yes, and the couple were wed in a stunning ceremony at Windsor Castle in October 2018.

While the marriage meant a name change for Eugenie, her husband's remains Jack Brooksbank. Now with all the formality out the way, they can get back to enjoying their happily ever after.