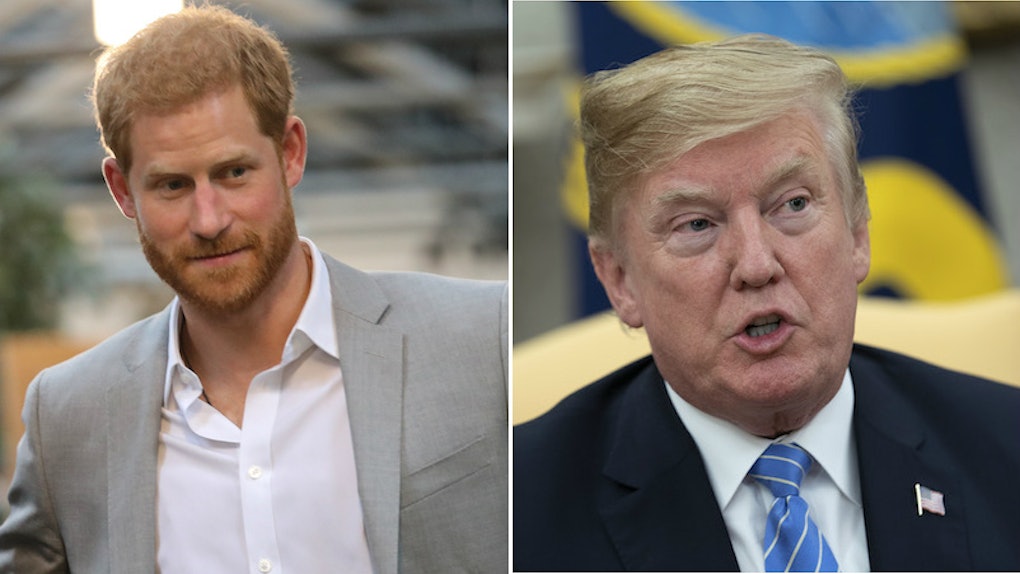 Remember that time Prince Harry married Meghan Markle in a fairytale wedding and President Donald Trump wasn't invited? Well, I do. Though it's not a hardline comment on what Prince Harry actually thinks about Trump, it's not a great sentiment. Now with Trump visiting the U.K. and meeting with the queen on July 13, I couldn't help but wonder about Prince Harry's response to Trump's U.K. visit. And oh, it's so very "royal."

Trump finally made it to the U.K. on July 12 after a year of back-and-forth and a cancellation back in January. Because the trip isn't technically considered an official state visit, but was described as a "working trip," whether the president would have a meet-and-greet with the queen wasn't set in stone. However, U.S. ambassador Robert Wood Johnson confirmed to Sky News back in June that the president would definitely be going to the U.K. and planned to meet the queen while there. While that's exciting and all, I had my eye on Prince Harry. Would he be in Windsor Castle when the Trumps rolled up? Would he sit and have tea with them? Would he be like, "Hey, Trump, like this joint? Got married here a couple months ago. You weren't invited. How's the FOMO?"

Well, it turns out Prince Harry stayed silent about the political matter, as a royal is expected to. It's tradition for the royal family to avoid speaking about politics, and this case was no different.

So, there you have it: Prince Harry's response to Trump's U.K. visit was total and utter silence.

The royals don't really take a side on American politics (diplomacy and all that), but it's no secret that Trump wasn't invited to the royal wedding that took place on May 19. While Prince Harry hasn't explicitly said anything negative about Trump, his new wife probably isn't the biggest fan of Trump's — if I had to guess.

Markle has been a staunch advocate for women's issues and gender equality, served as a UN Women Ambassador, and is vocal about her support for the #MeToo movement. During the first yearly Royal Foundation Forum back in February, Markle expressed her views on the importance of movements like #MeToo and #TimesUp. She said women have a voice and people just need to "listen" to them, according to Time. She said,

The idea of "women's empowerment" isn't something Trump's really known for. After all, shortly before he went across the pond, Trump was tasked with nominating a new justice to the Supreme Court. Trump has long made it known that he wanted to swing the bench towards overturning abortion rights case Roe v. Wade, and selected Brett Kavanaugh, a judge from the United States Court of Appeals for the District of Columbia Circuit who once tried to block an undocumented teenager from getting an abortion after a lower court approved it. These actions and sentiments expressed by Trump aren't exactly women-friendly.

I don't know about you, but I'd put some big money on Markle not being #TeamMAGA, and because they seem very close and on the same wavelength usually, I'm gonna say Prince Harry is on his wife's side. Of course, there's no way for me to know for sure. That's just a guess.