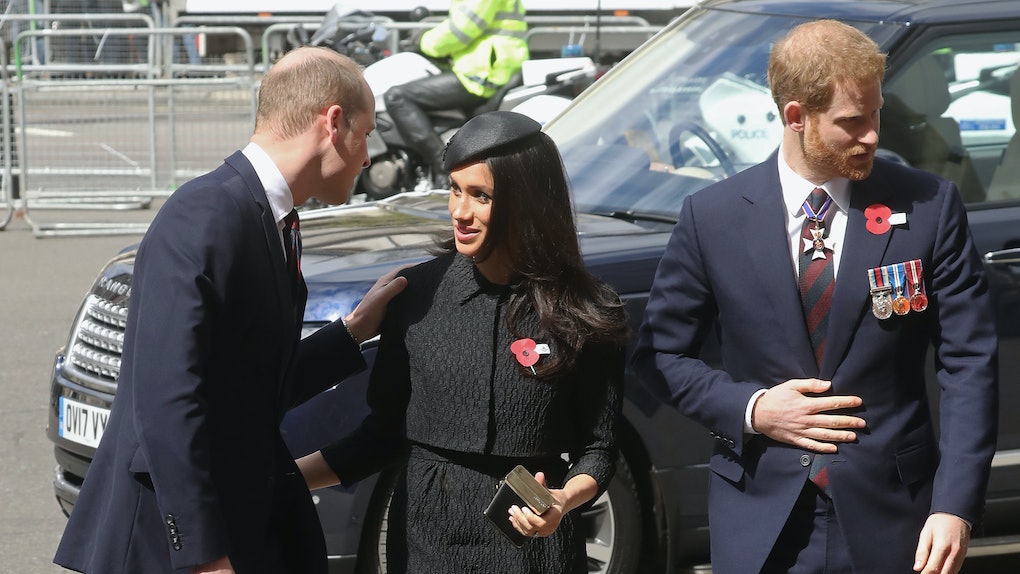 Get the burn pads ready because I've got some piping hot royal tea for you. The Channel 5 documentary dramatically titled, William & Harry: Princes at War, premiered on Aug. 16 and in it lies Prince Harry's reported quote about Prince William "wrecking" his relationship with Meghan Markle when they got engaged. Well, to be clear, the documentary doesn't feature any footage of Harry actually saying that himself (not that any of us thought Harry was actually going to be interviewed for a documentary titled William & Harry: Princes at War). Instead, the documentary features a reporter who claimed Harry said that. But still. It's juicy drama and I'm not not here for it. Elite Daily reached out to the royal palace for comment and did not hear back in time for publication.

According to the reporters interviewed throughout the documentary, Prince Harry didn't quite feel like Prince William and Kate Middleton were as welcoming toward Meghan as he would have liked them to be when they were first dating. And this isn't really new information. An insider told People back in April that William tried to warn Harry against rushing into marrying Meghan and that Harry was not pleased with his big brother's advice. According to People's insider, the conversation left Harry feeling "angry and hurt."

Reporters in the documentary echoed versions of the same storyline. Sky News broadcaster Carole Malone said William reportedly tried to tell his little brother not to rush into marriage with Meghan because “He’d only known her for less than a year when they got engaged.” And, according to The Sun's royal correspondent Emily Andrews, Harry did more than just get "angry and hurt." Andrews said Harry reportedly “went ballistic and said, ‘You’re trying to wreck this relationship before it’s even started.’” Oof.

Before you go judging William and Kate, royal expert Ingrid Seward did her part in explaining things from their point of view in the doc. “It was all so quick that William and Kate didn’t have a moment to get to know Meghan because Harry hardly knew Meghan,” Seward said in the doc. “And, of course, quite naturally William and Kate would have thought, ‘Oh, she’s been married before, she’s older than Harry, I hope she’s going to make him happy.’ Anyone would think that.”

Of course, Harry, Meghan, Kate, and William have all remained silent about all of these rumors of a royal feud. So, as far as we all know, it could all just be one gigantic rumor. Here's to hoping that's the case — and that these rumors eventually die down.