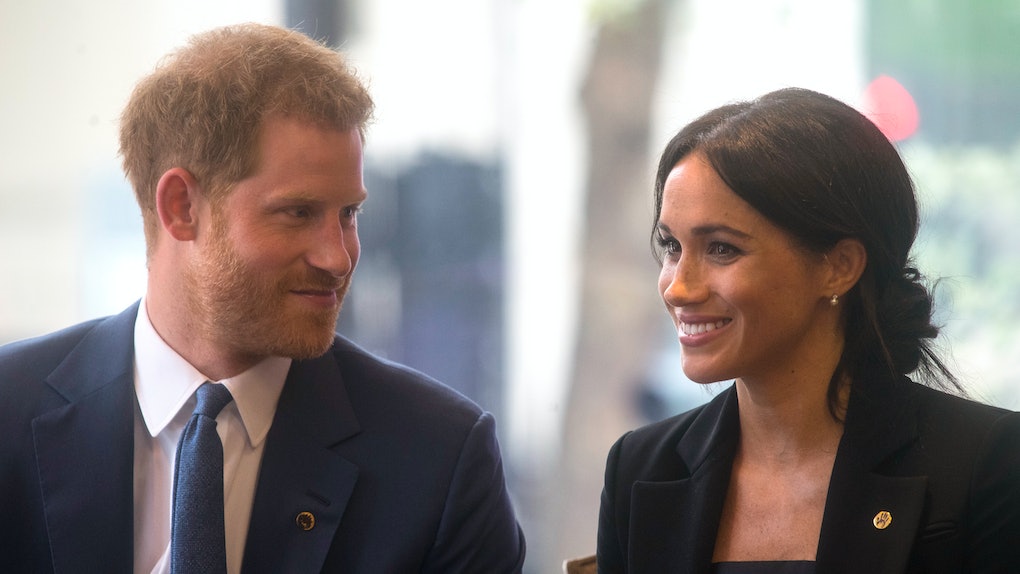 Prince Harry and Meghan Markle's little royal won't be here until 2019, but there have already been some ridiculously cute moments regarding the future baby. From the parents-to-be showing off some serious PDA to Markle revealing her growing baby bump, it's truly been such a sweet and intimate experience to watch already. I don't mean to pile it on (I do, though), but Prince Harry's comments about Meghan Markle and their baby at the Invictus Games mark one of the most adorable moments yet and you've gotta see it. You need to see it.

While speaking at the Invictus Games Opening Ceremony in Australia on Saturday, Oct. 20, Prince Harry totally gushed about his wife and their recent baby news, joyfully expressing his excitement for his growing family. “First of all, thank you for the welcome you have given Meghan and I over the last few days,” he said. “I have been so proud to be able to introduce my wife to you and we have been so happy to be able to celebrate the personal joy of our newest addition with you all.” Honestly, can Prince Harry get any sweeter? In case that didn't tug on your heartstrings enough, Kensington Palace also released a photo of Prince Harry practicing the speech, which means Markle might have heard the adorable message twice over.

The soon-to-be parents also packed on some PDA at the event, which included interlocking their fingers and intimately leaning into each other.

Markle also leaned in to whisper something to Harry (maybe a sudden baby name idea or potential colors for their nursery? Eek, the excitement!)

As USA Today notes, the Invictus Games are extra momentous to the pair: It's where they made their first public appearance as a couple at the 2017 games in Toronto. Their relationship has honestly seemed like a fairytale ever since. In November 2017, Harry popped the question to Markle during a cozy, intimate dinner with a stunning sparkler that features diamonds from Princess Diana’s personal collection. Get this: Harry had the ring custom designed so that his late mother could be on his and Markle's "crazy journey together.” HOW. CUTE. The two made things official just months later in May 2018, in a stunning royal ceremony at St. George's Chapel at Windsor Castle — and now, they're having a baby!

Kensington Palace announced the royal baby news on Oct. 15 via Twitter, sharing a photo of Markle and Harry in a sweet PDA moment, which included smiling and sitting with their arms intertwined. The caption read: "Their Royal Highnesses The Duke and Duchess of Sussex are very pleased to announce that The Duchess of Sussex is expecting a baby in the Spring of 2019."

Obviously, we've got quite some time before the royal baby makes his or her debut with Markle's due date being so far away. But in the meantime, it looks like the couple plans on keeping us in the loop on their journey to parenthood, so get excited. Who knows what adorable moment is next.