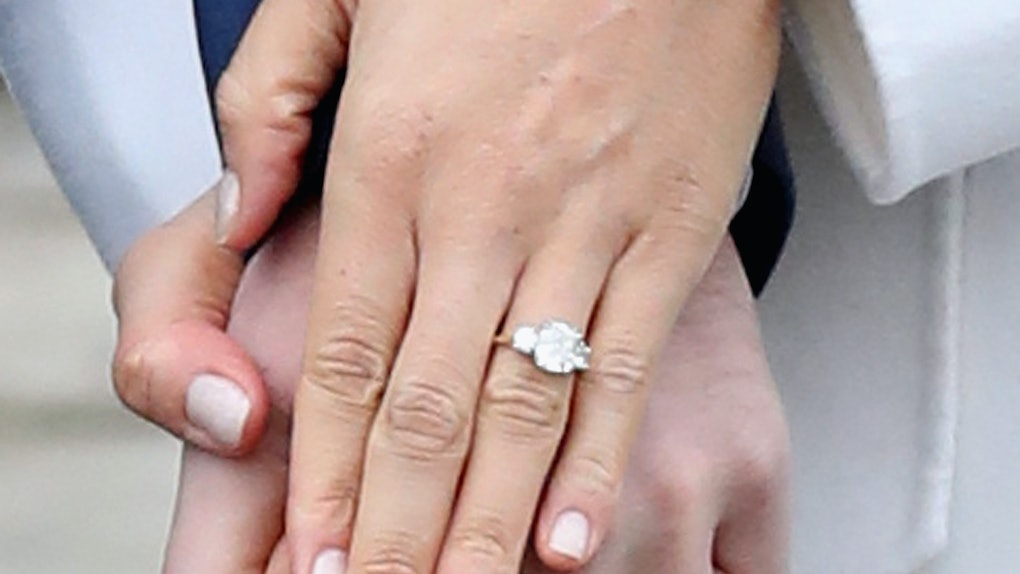 How Much Is Meghan Markle's Engagement Ring Worth? The Rock Is So Gorgeous

By now you've heard the good news that Prince Harry proposed to his girlfriend and American actress, Meghan Markle. Apparently, he popped the question earlier in November. Now, all eyes are on the gorgeous bauble, and us regular plebeians are wondering how much is Meghan Markle's engagement ring worth? You know, because we're nosey or whatever.

Here's the short answer: a lot.

The couple made their official announcement in a statement from the Clarence House. It states,

According to Newsweek, Markle is set to inherit quite the small fortune. Prince Harry reportedly has a net worth of $40 million, and received an additional $16 million when his mother, Princess Diana, suddenly and tragically passed away in 1997.

The ring Prince Harry gave to Markle is also truly fit for a princess.

According to ABC, the center stone comes from Botswana. The two smaller diamonds on either side of the center cushion-cut solitaire are reportedly from one of Princess Diana's brooches. In an interview with BBC, Harry said,

The little diamonds on either side are from my mother's jewelry collection to make sure that she's with us on this crazy journey together.

According to jewelry expert Sophie Lomax, who is also head of design at 77Diamonds.com, the ring likely costs around 50,000 pounds. That's right around $66,000 USD.

From the very small picture I could see, it looks like a very rounded cushion-cut (square cut with rounded corners) stone of at least two carats, flanked by two brilliant-cut shoulder stones... From the Rappaport diamond pricing index a ring like this would cost at least £50,000 to buy new including the side stones - although there's no way to know what colour grade the central diamond is, which would hugely affect the price.

Let's just assume the colour grade is top-freaking-knotch. Plus, the only real person Prince Harry needed to impress was Markle, and it sounds like he knocked it out of the park.

While the ring is truly stunning, it sounds like the proposal was much more relatable. According to Harry, he proposed while the couple was "trying to roast a chicken" and Markle barely let him get the question out.

She didn't even let me finish. She said 'Can I say yes? Can I say yes?', and then there were hugs and I had the ring in my finger and I was like, 'Can I give you the ring?' She goes, 'Oh yes, the ring.'

Congratulations, Meghan and Harry! Keep us posted on the details.