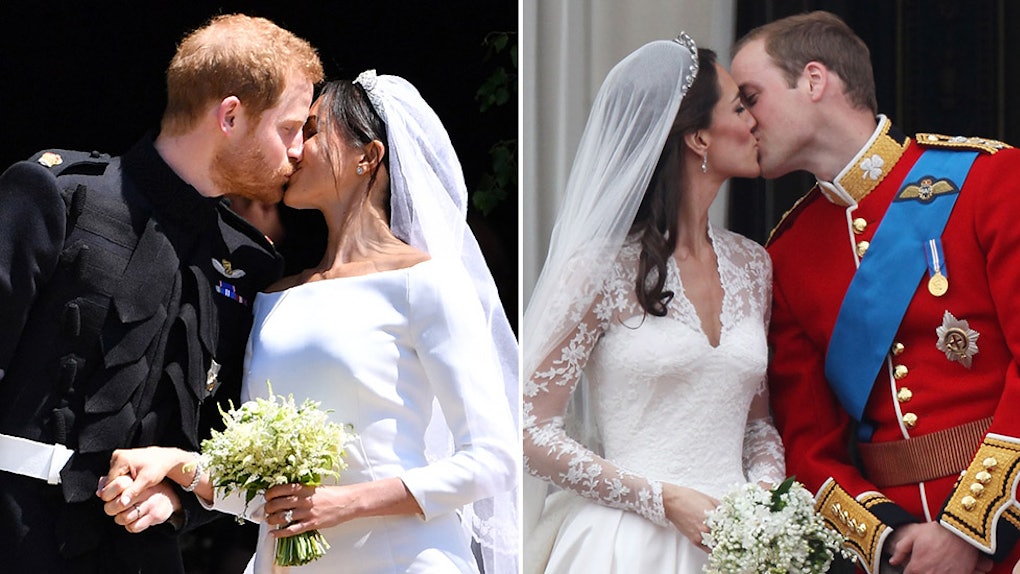 Prince Harry & Meghan Markle's Royal Wedding Kiss Was So Simple, Yet So Sweet

When it comes to royal weddings, there are several hallmarks that fans think of. One is the ride from the house to the church. The next is the shot of the wedding gown as the bride arrives. Then there's the walk down the aisle. Once the ceremony itself happens, which includes the first kiss, exchange of rings, and whatnot, there's the recessional. The married couple then ride through the crowds, waving and smiling at the cheers, until they arrive back at the Palace, and then finally, the kiss. But Prince Harry and Meghan Markle's Royal Wedding kiss isn't going to be like the ones we've seen before.

The royal wedding kiss shots are iconic. They're never dramatic, no one gets bent backward, there are no grand sweeping gestures. This is, of course, the royal family, and decorum should be maintained at all times. When the former Prince Philip of Greece and Denmark and then-Princess Elizabeth married in 1947, their kiss was not actually pictured in the papers. Instead, a photo of the two waving from the balcony sufficed. In 1981, Prince Charles did a very chaste "kiss on the hand" to Diana, Princess of Wales for the crowds.

Back in 2011, Prince William, Duke of Cambridge and Kate Middleton were more modern, but though they did actually do a full-on kiss on the lips for the crowd, their kiss was still "for display only."

But all three of these moments have something in common. They take place on the royal balcony in the center of London, in front of crowds filling Victoria Square in front of the gates of Buckingham Palace and streaming down the Mall, cheering and waving and screaming at the Royals high above on display.

Prince Harry and Meghan, in comparison, aren't doing that. The wedding isn't even in London. This is taking place on the Grounds of Windsor Castle, a good hour's ride by car from Buckingham Palace. Being in the (relatively) smaller town of Berkshire makes for a more intimate moment. It's also cheaper on taxpayers, and it makes it a non-state event, which means no politicians have to be invited.

There's just one small detail that Windsor Castle lacks: a balcony. So how in heaven's name are Prince Harry and Meghan going to stand above the crowds on display for their upward longing gazes to stare at?

Well, first of all, that's part of the point. Prince Harry and Meghan are doing everything they can to be not on display for this wedding. Prince Harry is the younger son of Charles, Prince of Wales and at this point he's sixth-in-line for the throne, which is as far back as can be without being completely relegated to "minor royal" status. Meghan may be an actress and arrived at this job with all the polish and poise the Palace could have hoped for. But she's still a commoner, and all of her behavior up until now suggests she doesn't wish to be viewed as somehow "above the common folk." In short, balconies just aren't their thing.

In fact, waiting until after the carriage ride wasn't even their thing. They kissed the moment they exited the chapel.

The kiss took place at the top of the stairs of the chapel, in the doorway. The doorway, for the record, was covered in an arch of floral work, creating an arch of greenery and white roses.

Putting the couple at the top of the steps ensured the two of them were positioned high enough that the entire crowd could see them, without putting them so high up that they were somehow "above" the crowd to be adored. It also had a more spontaneous feeling to it than Prince William and Kate's "Display Kiss." Here they were, exiting the church for the first time as husband and wife, a cheer goes up from the crowd and BAM! Kiss. It was like something out of a movie.