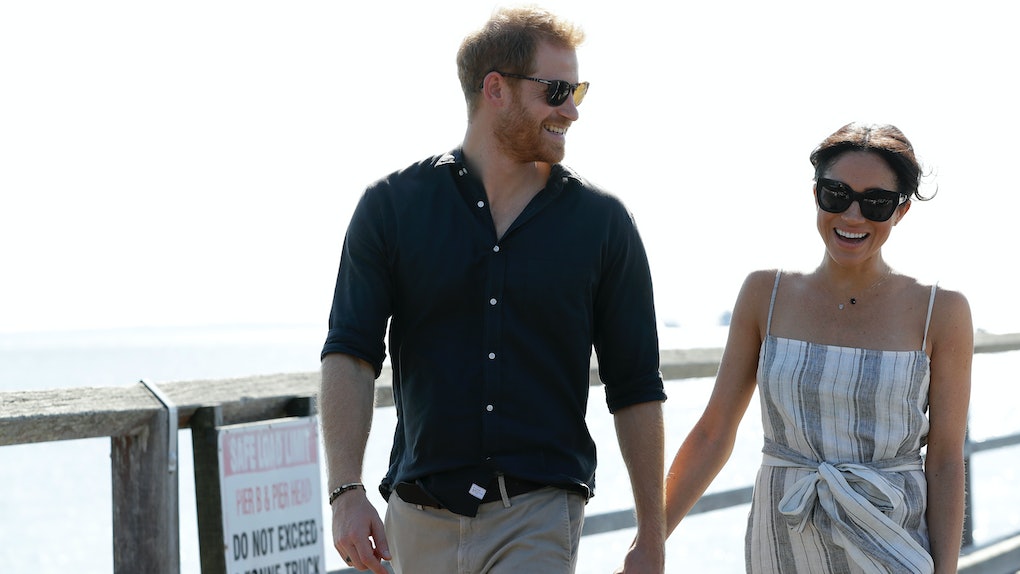 Everyone gets nervous from time to time. And hopefully, at this point, most of us have figured out a way to combat our nerves. For example, when I get nervous about anything, I try to take a few deep breaths and remind myself that I'm lucky enough to have a family that will love me no matter what happens. Even certain members of the royal family reportedly have their own go-to method for fighting nerves. And it's adorable. Apparently, Prince Harry and Meghan Markle play with their wedding rings when they get nervous as a "self-comfort ritual."

You see, Cosmopolitan first spotted the pattern last night when Meghan attended The Fashion Awards in London in support of her friend and wedding dress designer, Clare Waight Keller, who was receiving an award for British Womenswear Designer of the Year. Meghan obviously looked fabulous, poised, cool, calm, and collected. But she did one small thing that led the reporters over at Cosmopolitan to believe she might have been nervous: she played with her wedding and engagement rings while Keller thanked her for the "unbelievable honor" of trusting her during an "incredible moment" in her life.

But the point is she was playing with them.

Check out the video for yourself below:

So why do we care that Meghan was playing with her rings? Well, because Harry does the same thing with his wedding band when he's away from her.

No, seriously. Check this out:

In the above image, Cosmopolitan reports that Harry was "fulfilling his duties as Captain General of the Royal Marines" for the first time ever. So, yeah, I think it's safe to say that he might have been a tad bit nervous. Especially without his wife there.

They both have a habit of fidgeting with their rings when they're apart from each other at events that could potentially be nerve-wracking... but why? Well, in an interview with Express regarding Harry's ring habit, body language expert Judi James explained: “This looks like a self-comfort ritual performed for two reasons, when he's feeling under pressure or lonely.”

“Firstly it allows him to create a barrier with his arms but by seeking out his wedding ring to touch and play with it suggests he's missing the back-up and support of his wife here," she continued to the publication.

Ugh, so freaking cute. And now, with Meghan doing the same thing with her ring while being thanked at the award show last night, I think it's safe to say that she might have been missing the support of her better half (just kidding, we all know that there is no "better half" in this situation... they're both fantastic).

What's one thing we can take away from this whole thing? Well, next time you're feeling nervous, take solace in the fact that even Prince Harry and Meghan Markle feel nervous from time to time. Nerves literally happen to the best of us.