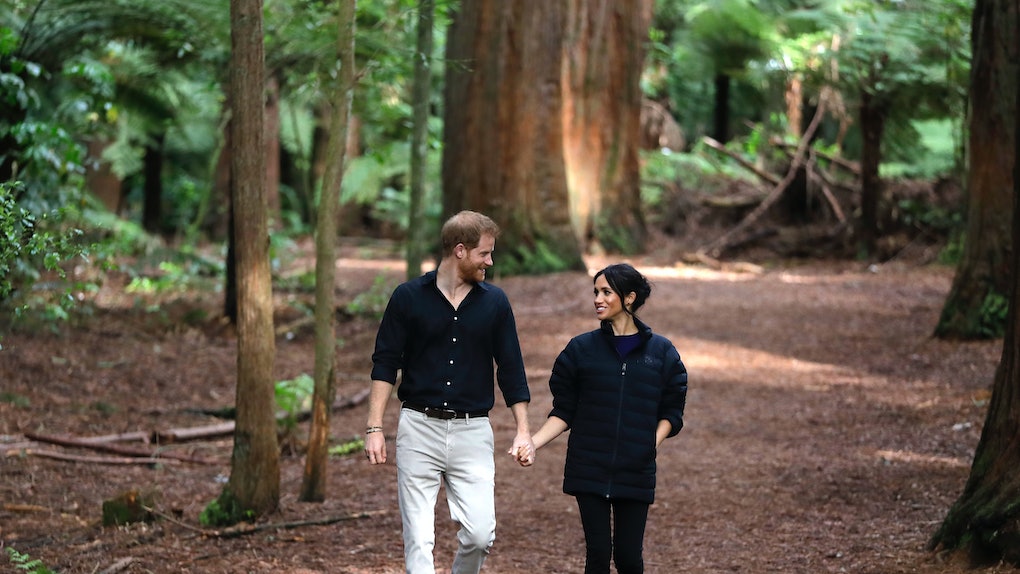 Prince Harry Is Skipping The Royal Boxing Day Hunt For Meghan Markle, According To Reports

You guys, can we just take a moment to reflect on the fact that 2018 is the year of stanning Prince Harry as #husbandgoals? Not only has he proved himself to be a pretty great Instagram hubby, but Prince Harry always has Meghan Markle's back and isn't scared to flout tradition to make his new wife happy. According to a report from the Sunday Mirror, Prince Harry is skipping the royal Boxing Day hunt for Markle once again, and it's the sweetest gesture of solidarity. Elite Daily reached out to Kensington Palace for comment on the report, but did not hear back by the time of publication.

On Saturday, Dec. 15, the Sunday Mirror first circulated the report that the prince was opting out of the Christmas tradition this year due to Markle's aversion to "blood sports." The former Suits star, who's been described as anti-fur, was reportedly the catalyst in Prince Harry deciding not to partake in the annual hunting trip, which he's previously attended over the last two decades at Sandringham Estate.

However, it's not the first time that Prince Harry has made a stand against the royal tradition for his lady. Back in September, the royal was noticeably absent on a grouse hunt during the family's annual trip to Balmoral, Scotland, and he also opted out of partaking in the hunting activities during last year's Boxing Day celebration.

At the time, an insider told The Sun, "The Boxing Day shoot was always going to be a tricky issue. Meghan is a keen animal rights campaigner and doesn’t like hunting in any form."

The source continued, "Harry loves it and has always been out there on Boxing Day. But if it means breaking with long-standing royal traditions to avoid upsetting her, so be it. It’s fair to say that there are some pretty stunned faces around here."

According to previous reports, Markle let her stance on hunting be known after her royal beau took part in a boar hunting trip in Germany last year.

"Meghan wasn’t happy when she found out what Harry had been up to in Germany," a source told the Sunday Mirror. "It upset her to think of him killing a defenseless animal"

The insider continued, "She’s a keen animal lover and likes to eat vegan during the week and she has a strict no-fur policy. She has also been encouraging Harry to eat less meat and more fruit and veg and is now keen to fully convert him to her views on hunting."

Since then, the dad-to-be has shied away from any hunting activities and put up a unified front with Markle despite ancient tradition, and it's such a sweet gesture of support. Seriously, though, get yourself a guy (or a prince, if you can) who stands by you through thick and thin and upholds your convictions.

Markle might be happy with her husband's change of heart, but a royal source reportedly told the Sunday Mirror that Harry's decision is a point of strife between the two brothers, according to The Daily Mail.

"Harry’s always loved hunting and it has provided them with a great chance to bond as brothers," the insider reportedly told the publication. "But now it looks like Harry’s shooting days are over. It’s the latest point of contention between the princes."

TBH, I find it hard to believe that refusing to hunt would be a real "point of contention" between the brothers, and an insider at Kensington Palace confirmed that Prince William is totally fine with his brother choosing not partake in the hunting in a statement to The Telegraph.

"This is completely untrue," the source told the publication.

Prince Harry and the expectant Markle will be spending Christmas at Sandringham with the Queen, Prince William, Kate Middleton, and the rest of the royal family, so I'm sure they'll be coming up with a new holiday tradition that everyone can get on board with.