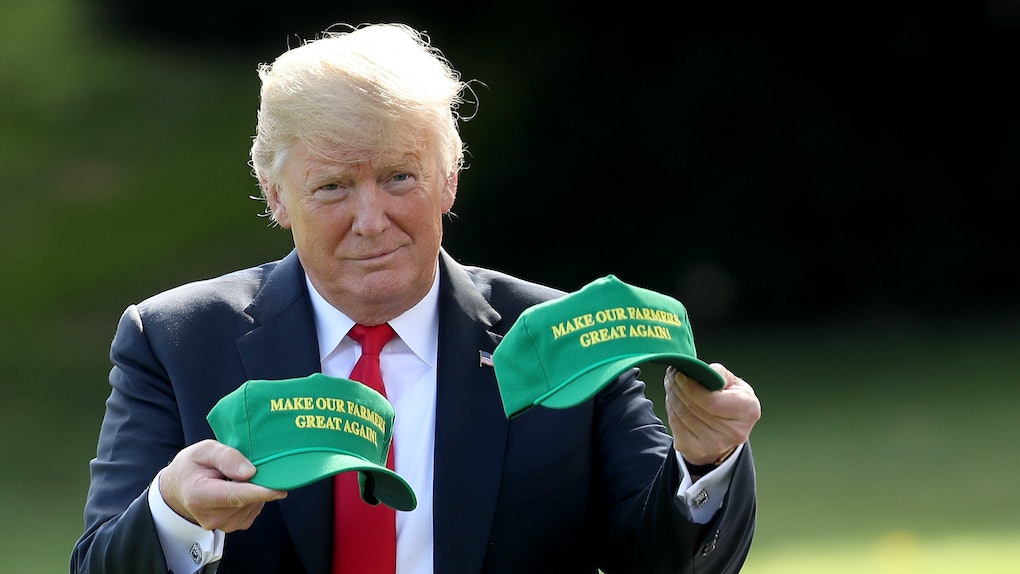 On Saturday, Sept. 1, President Trump concluded a round of golf in Virginia by taking to Twitter to shout-tweet his notorious campaign slogan, "MAKE AMERICA GREAT AGAIN." This might not have attracted attention in itself, but the timing seemed suspect. Earlier that day, mourners gathered at Washington National Cathedral service to commemorate the life of Senator McCain, who passed away on Aug. 25 after a year-long fight with aggressive brain cancer. President Trump — who was frequently at odds with the late politician during his presidency — was not invited to the service, but he seemed to not-so-subtly allude to Meghan McCain's eulogy with his MAGA tweet. Elite Daily reached out to the White House to confirm if President Trump's tweet was a response to McCain's comment but did not hear back at the time of publication.

"The America of John McCain has no need to be made great again, because America was always great," McCain told the bipartisan assembly at her father's funeral on Saturday morning, at which point they broke into applause.

During her speech, McCain also seemingly shaded President Trump's five deferments during the Vietnam War by slamming "cheap rhetoric from men who will never come near the sacrifice [Senator McCain] gave so willingly, nor the opportunistic appropriation of those who lived lives of comfort and privilege." It was McCain directly calling Trump's 2016 MAGA campaign slogan into question that really caught people's attention.

While many lauded Meghan McCain's courage in putting Trump — who'd previously said he didn't see Senator McCain as a "war hero" and even called him a "loser" for ceding the 2008 Presidential Election to President Barack Obama — in his place on the emotional occasion, it looks like the president wasn't about to let the digs slide.

After tweeting, "MAKE AMERICA GREAT AGAIN," he re-tweeted it again, just so everyone could get the idea.

Unsurprisingly, Twitter thinks the statement was directed at Meghan McCain. Elite Daily reached out to the White House for further comment on President Trump's tweet but did not hear back at the time of publication.

Many have taken to Twitter to hit back at Trump's statement by sharing Meghan McCain's fighting words.

All eyes have been on President Trump since news broke of the senator's passing. It's no secret that the pair were engaged in a bitter war of words during Trump's presidency, especially regarding disparaging remarks that the commander in chief made about McCain's wartime service in Vietnam. After his death, President Trump came under fire for his brief statement, which included no mention of McCain's service or his character, but rather focused on his grieving family. In addition, he only lowered the White House flag to half-mast for the bare minimum time requirement instead of until burial, like is customary in times of national grieving.

Meanwhile, I'm still trying to wrap my head around the possibility that the president of the United States might have responded to a grieving daughter's eulogy with a MAGA Tweet.