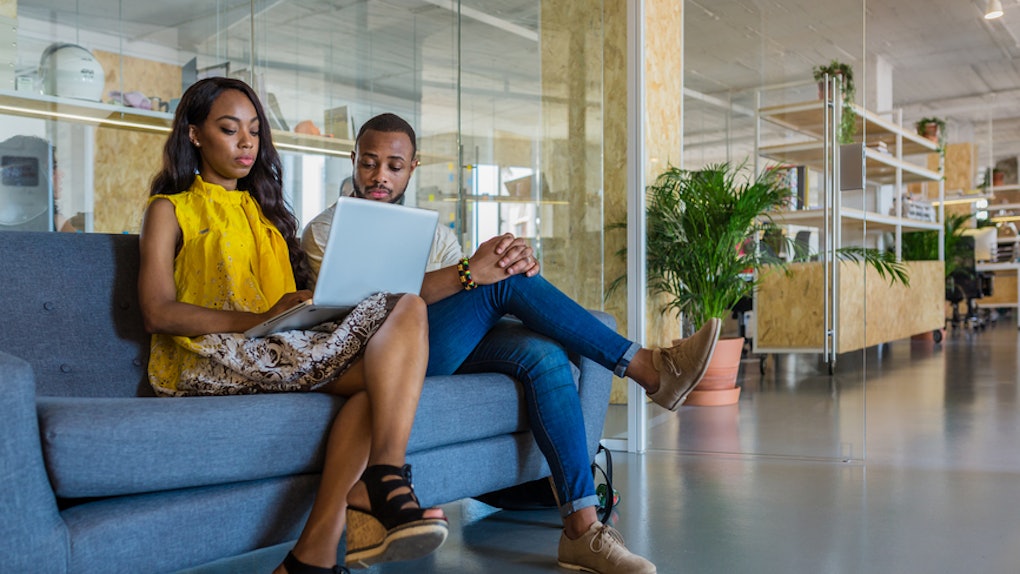 You've had your eyes on your work crush (let's call him Larry) since orientation day. Larry is hilarious and he looks so freaking cute when he wears that one suit on Fridays, and sometimes you really honestly do think he feels the same way. But WTF are you supposed to do? You WORK with him. He's your professional colleague. You don't want to undermine your professional relationship with him. But, of course, your overwhelming urge to boink him complicates things. One question remains: Should you make a move on your work crush, or should you just suppress this overwhelming URGE?

On the one hand, you can tell Larry and he'd feel the same way, and the two of you will start dating and eventually get married, and your best friend will read all those crazy Ghats you sent her about how obsessed you are with him before you ever even started dating at your wedding reception, and everyone will cry because it's so adorable. On the other hand, you could tell him and it would work out for a while until it stopped working out, and the two of you had to co-habitate your office as awkward exes who are still forced to be cordial because of their job. On the third, most terrifying hand, you tell him and he doesn't feel the same way and it's AWKWARD.

Well, a new survey of over 3,000 Plenty of Fish users across the United States found that Larry (remember, that's what I named your work crush!) could be wanting you to make a move after all.

Now, before you go march over to Larry's desk and tell him how you feel, let's talk a little bit about strategy. While almost half (49 percent) of singles admit to having flirted with a coworker in the office, 38 percent believe it should happen outside of the work place. But there's a chance people are already hooking up in your office. How big of a chance? Let me put it this way: 27 percent of men admitted to hooking up with someone at the office. That number is way smaller for women, with only 11 percent of them saying the same.

Even if you're not flirting with your coworker, odds are you're flirting with someone during work hours. Yep, just because it's between the hours of nine and five doesn't mean you're officially no longer allowed to get your flirt on. As a matter of fact, while you were busy making that quick Chipotle run by yourself, 22 percent of singles were enjoying a first date on their lunch breaks. As if that wasn't ~steamy~ enough information, 39 percent of singles have sexted someone while they were working.

And if they weren't making any romantic moves themselves, 39 percent admitted to seeing a coworker use a dating app during work. But don't be shy about talking to them about it! Talking to your work friends about your personal life can be awkward because, obviously, your relationship with them is, at it's core, professional. That being said, you also spend a minimum of 40 hours a week with these people, so the temptation is obviously there.

The survey finds that over half (55 percent) of singles have shared details of their love lives with coworkers. Not to mention, a whopping 70 percent of singles have offered some relationship advice for their coworkers, with women being slightly more likely than men to share such advice.

The main takeaway here? Tell Larry you're into him. You just never know.