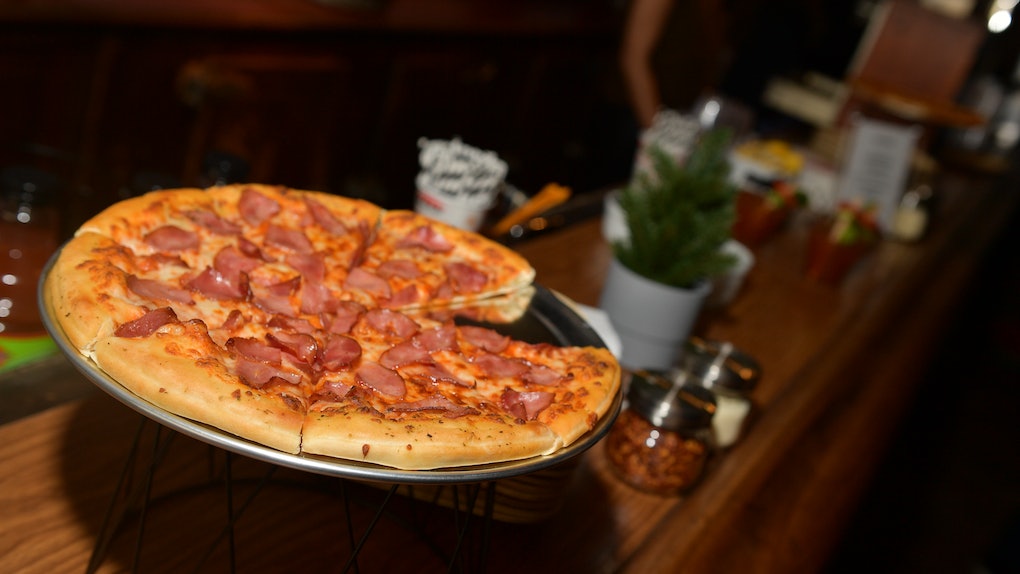 In addition to warm spring weather and rainy days, the end of April also brings the highly anticipated NFL Draft. Whether you have April 25 marked down on your calendar as "DRAFT DAY!!!" or it simply makes you think of Miss Congeniality (it's the perfect "date," you guys), Pizza Hut will be crushing cravings everywhere by providing cheap draft day snacks. So, if you haven't already heard all about Pizza Hut's 2019 NFL Draft deal for April 25, it's making way for one of the most delicious discount opportunities of the season.

Maybe you thoroughly enjoy watching football, or you might simply be a fan of Pizza Hut. Either way, you will most likely want to tune into the 2019 NFL Draft this season, because the popular pizza chain is unveiling a special code across all of its social media platforms to help you get in on tasty savings, according to a press release sent by Pizza Hut. Once Pizza Hut officially releases the code to their Twitter and Instagram pages during the first NFL pick on April 25, you will be able to get a full 50 percent off all of their menu-priced pizzas. IDK about you, but I will definitely be getting myself some of that Double Cheesy Crust Pan Pizza.

FYI, the NFL Draft starts at 8 p.m. ET on Thursday, April 25, so make sure to keep a close eye on Pizza Hut's social media accounts around that time. Once you obtain the chain's secret code via social media, you will also be able to enter a special NFL sweepstakes, according to the press release. This will give you the chance to win a VIP trip to a 2019-2020 NFL season game of your choice. New Era Field, here I come.

Pizza Hut's Chief Brand Officer, Marianne Radley, expressed pure excitement in the press release. She said she couldn't be happier to be sponsoring the NFL, and the fact that 2016's first overall draft pick, Jared Goff, is teaming up with the brand to get fans excited.

According to the press release, Radley said:

With year one of the sponsorship under our belt, it’s a surreal feeling to return to where it all began: the NFL Draft. Football fans have been our focal point since becoming the Official Pizza Sponsor of the NFL, and to say ‘thank you,’ we teamed up with our player partner Jared Goff to offer fans a deal fit for the first round.

Additionally, for the second year in a row, Pizza Hut will be honoring NFL Draft's 78th overall pick, which they call the “Pi Pick.” If you aren't much of a math wiz, according to the press release, that will be the 14th pick in the third round, which amounts to 3.14, aka Pi. That lucky AF player will end up winning free pizza pi(es) for a year to survive their rookie NFL season. OK, you guys, you have from now until Friday, April 26 (when the third-round picks happen) to devise a plan to become besties with the rookie that is about to be hooked up with all the 'za.

Those who are planning on heading to Nashville, Tennessee for the NFL Draft will be able to get in on some of Pizza Hut's awesome experiences. For example, fans will be able to dance alongside Steeler's wide receiver JuJu Smith-Schuster through a special AR experience at Nissan Stadium. So get pumped, and be prepared to dance, dance, dance.

Many of you are probably excited to see who gets picked for the 2019 NFL Draft, but between you and me, I'm mostly excited to get in on some of those discounted pies. You'd best believe I'll be getting in on this amazing deal, y'all... my body is so ready.