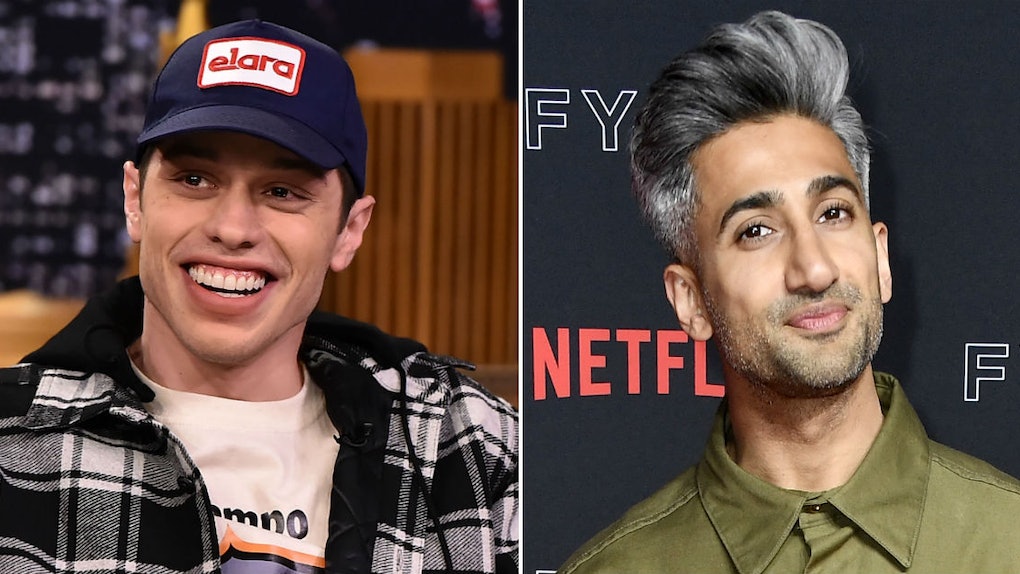 Pete Davidson's Wedding Outfit Will Be Untraditional, According To 'Queer Eye''s Tan France

There’s almost nothing traditional about Pete Davidson’s whirlwind romance with Ariana Grande. The two have gone above and beyond to make sure the world knows that their love for each other goes way beyond what the media expects of them. And it sounds like their wedding is going to be just as wild! In fact, according to Tan France, Pete Davidson’s wedding outfit is going to be anything but traditional. Big surprise there, right?

France, of Queer Eye fame, recently opened up to Page Six about how he would style Davidson for his upcoming wedding. In his interview, France explained that he doesn’t want to see Davidson go the traditional route.

“I would like to see Davidson wear his version of swag,” France said. “Probably not a tux! I don’t want to see him in a neutral, regular tux — he’s way too cool for that.”

Back in June 2018, Davidson asked France to dress him for his wedding. So, it’s safe to say that France knows exactly what Davidson’s style is at this point. He also knows Grande pretty well, too, which isn't surprising.

“And you know whatever Grande wears is going to be epic,” France said of a potential wedding dress. “She’d look great in everything. And she must have every designer in the world clamoring to dress her — I know that if I were a designer, I would be!”

There’s no word yet on which designers Grande is considering for her wedding gown, but whichever one she goes with is going to be perfect, for sure! She’s a style icon, at this point, right?

France also told Page Six that he’s super happy for Grande and Davidson. He even defended their decision to get engaged after dating for a short time.

“I really couldn’t be happier for those two; I love when friends get together and romance follows,” France explained. “And you know, when I got together with my partner [illustrator Rob France] we decided to get married after just a few dates — and we’ve been married for 10 years!”

France is totally on Davidson’s side here and that’s really sweet. Plus, it makes a lot of sense since the two have been friends for a little while now.

Back in March 2018, France appeared on Saturday Night Live to help Davidson dress to impress his then-girlfriend Cazzie David.

Here’s a look at all the shenanigans that went down on SNL:

The video is pretty hilarious, but shows that France and Davidson actually work really, really well together. They’re bound to come up with something really special for the wedding.

So, all in all, Davidson’s going into this whole wedding thing on his own terms. And I’m sure he’ll look amazing doing it. France is such a professional that there’s absolutely no way he can go wrong. And it’s almost guaranteed that Grande is going to love whatever Davidson brings to the table. Can’t wait to see what those two wear!