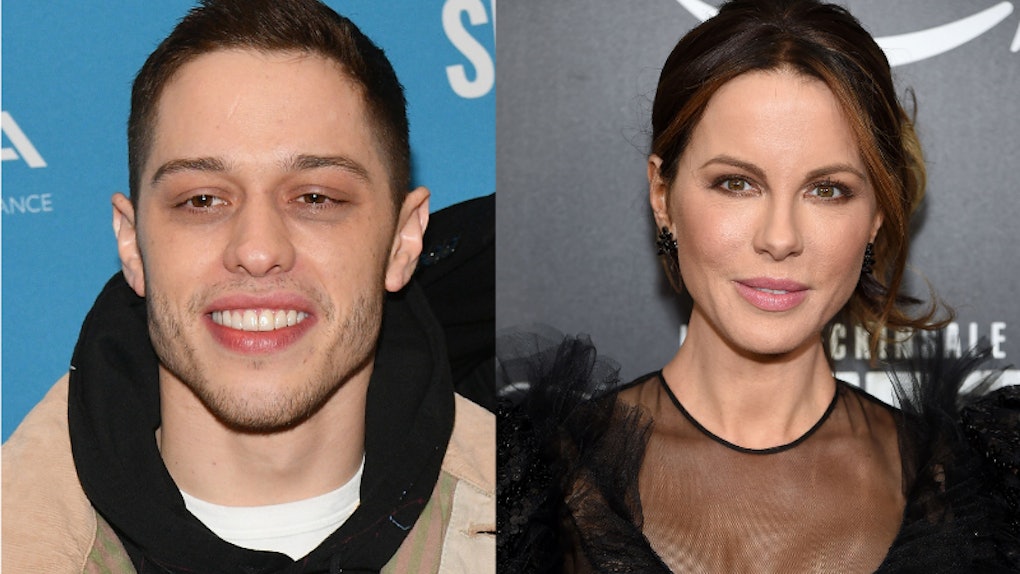 Less than a week after launching a million memes with a highly-publicized Rangers game kiss with rumored flame Kate Beckinsale, Pete Davidson is setting the record straight on one thing about their relationship. On March 9, the comedian opened up about what's going on between him and the actress (who share a 20-year age difference) with a few quips and a lot of name-dropping on Saturday Night Live. Pete Davidson's SNL bit about Kate Beckinsale addressed the two-decade age gap between the rumored couple, and he actually made a pretty good point. Elite Daily previously reached out to both Beckinsale's and Davidson's reps for comment on the relationship speculation, but did not hear back at the time of publication.

In my honest opinion, Kate Beckinsale and Pete Davidson are the celebrity pairing that literally no one saw coming, and they've only continued to mystify fans as they've continued to step out together since first being linked together in early January. Elite Daily previously reached out to both Beckinsale and Davidson's reps for comment on their outings and relationship status, but did not hear back. In addition to the fact that these two seemingly ran in completely different social circles, many are also scratching their heads over the couple's significant age gap (Davidson is 25 and Beckinsale is 45, for reference). While a big age difference isn't a relationship deal breaker per say, especially in Hollywood, there's definitely still some stigma around it.

Davidson addressed this and pointed out why it's actually not that unusual on March 9's episode of Saturday Night Live. When the comedian sat down with Colin Jost on SNL's "Weekend Update," Jost couldn't help but try to get the deets on his co-host's newest flame because, let's face it, we're all dying to know what's going on with these two.

"Apparently people have a crazy fascination with our age difference," Davidson began, without referring to Beckinsale by name.

"It doesn't really bother us, but then again I'm new to this," he continued, before proceeding to share a lengthy list of fellow A-listers who've also dated someone significantly younger or older than them.

Jokes aside, this is just the tip of the iceberg. I also think that it's significant that all of the people he named are men, meaning that there's still a long way to go before the stigma is lifted on women dating men who are significantly younger than them.

Still, if the couple's full-blown and completely public makeout at a Rangers game on March 3 is anything to go by, it's proof that they're not letting any of that get to them. While Beckinsale and Davidson have yet to confirm that they are in fact dating, it looks like things are only continuing to heat up in the romance department, thanks to the fact that they're doing them and not worrying about what anyone else thinks.