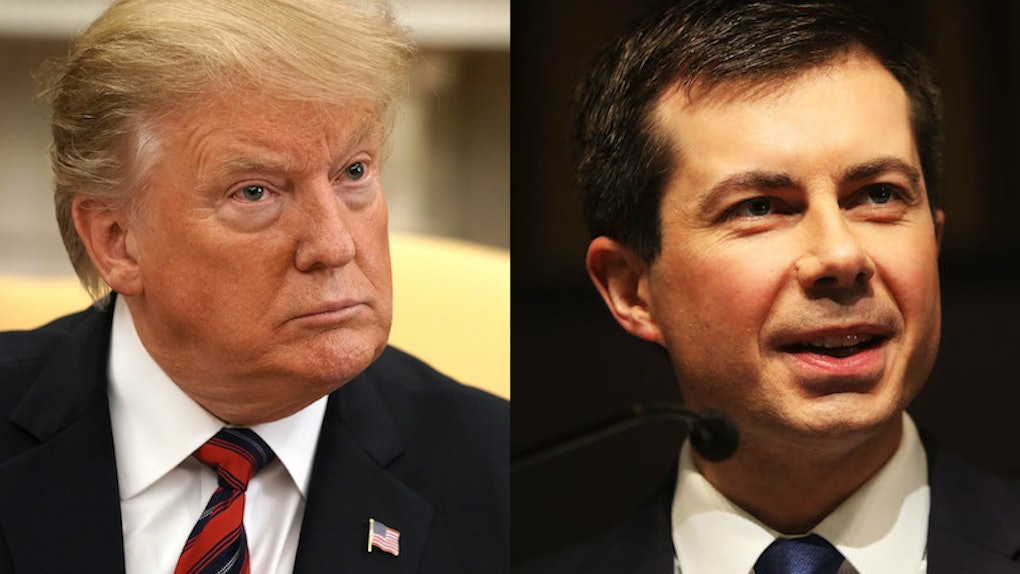 Have you ever heard of Alfred E. Neuman before? That's the nickname President Donald Trump has decided to bestow upon one of his 2020 rivals, Pete Buttigieg. But not everyone caught the reference — including the South Bend, Indiana mayor himself. Pete Buttigieg's response to Trump's nickname for him will actually have millennials relating hard AF.

Trump threw the barb while speaking to Politico in an interview published on Friday, May 10. When asked about the Democratic candidates that he sees as a threat, the president was dismissive about Sen. Bernie Sanders (I-Vermont), who he said "seems to be going in the wrong direction," and Buttigieg. "Alfred E. Neuman cannot become president of the United States," Trump said to the outlet, comparing Buttigieg to the gap-toothed, red-headed mascot for Mad magazine, the iconic humor magazine. Neuman's peak seemed to be decades ago, which is apparently why the 37-year-old politician had a hard time figuring out who he is.

Speaking to Politico about Trump's nickname later on Friday, Buttigieg said he had to look up Neuman before he even understood the jab, dismissing it as a "generational thing." He said:

I’ll be honest. I had to Google that. I guess it’s just a generational thing. I didn’t get the reference. It's kind of funny, I guess. But he’s also the president of the United States and I’m surprised he’s not spending more time trying to salvage this China deal.

LOL, Buttigieg is just like every millennial who has to look up a reference from before their time when their parents or grandparents bring it up. Buttigieg at the end seemed to be referencing trade talks between the United States and China that came to a halt on Friday, which seemingly sets the stage for a prolonged trade war between the two. Trump tweeted on Friday, the day the U.S. imposed new tariffs on China following a failure to reach a deal, "Over the course of the past two days, the United States and China have held candid and constructive conversations on the status of the trade relationship between both countries. The relationship between President Xi and myself remains a very strong one, and conversations into the future will continue. In the meantime, the United States has imposed Tariffs on China, which may or may not be removed depending on what happens with respect to future negotiations!"

The internet quickly weighed in on the nickname, because of course it did.

One person pointed out the almost 30 years between Neuman's first appearance on the mag and Buttigieg's birth in 1982.

Another called Trump's dig a "self-own," given that his likeness has shared covers of Mad magazine with Neuman.

And Mad magazine weighed in itself, playing on Buttigieg entering the presidential race as an unknown. "Who's Pete Buttigieg? Must be a generational thing," teased the magazine.

The nickname adds to a growing list of unflattering monikers Trump has compiled for his rivals. On Friday, the president also labeled 2020 candidate Joe Biden "SleepyCreepy Joe." He has previously referred to Biden as "sleepy," but he seemed to make the addition based on a series of misconduct claims that have recently been leveled at the former vice president. Biden has said he does not recall the incidents, but vowed to be more aware of personal space and boundaries. His representatives did not return Elite Daily's previous requests for comment on the subject. Trump also calls Sanders "Crazy Bernie," a nickname he created for the senator during his first presidential run back in 2016. Sanders previously responded to the name in February 2019, tweeting about Trump, "What's crazy is that we have a president who is a racist, a sexist, a xenophobe and a fraud. We are going to bring people together and not only defeat Trump but transform the economic and political life of this country." (Trump has long denied accusations set forth in Sanders' response.) Then there's Sen. Elizabeth Warren (D-Massachusetts), who will also challenge Trump in the upcoming election. Trump often calls her "Pocahontas," which stems from her claim of Native American ancestry. Warren has previously qualified her claim, noting she is "not a tribal citizen," and she apologized for not being "mindful of the distinction with tribal citizenship and tribal sovereignty," per NPR.

So, the Neuman jab is all a part of Trump's game. And with the list of 2020 Democratic candidates steadily growing, it seems almost certain that Trump will continue cranking out names for his opponents. Stay tuned.