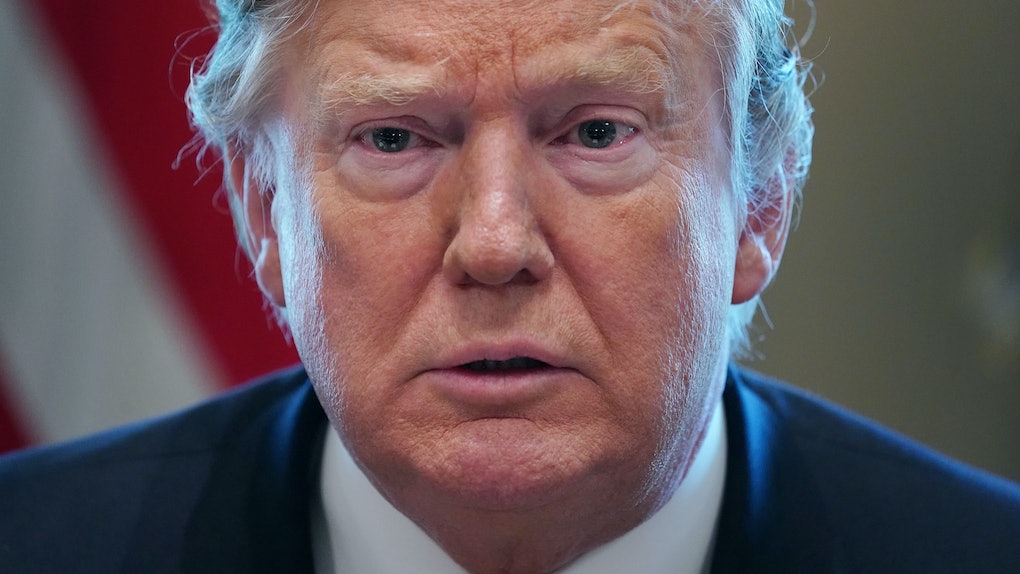 President Donald Trump's trolling just hit an all-time high. While former Vice President Joe Biden has been trying to recover from misconduct allegations, the president tweeted out a parody video that showed an edited Biden creeping up on himself and feeling on himself. As wild as it sounds, Donald Trump's tweet mocking Joe Biden's misconduct allegations is also creepy AF.

It sucks for Biden because he really seemed to be hoping that he could move past the allegations that several women have recently leveled against him. In recent days, multiple women have come forward to allege that the former vice president touched them in ways that made them uncomfortable, although none of the women accused him of touching them sexually. Although Biden has said that he does not "recall" their versions of events, on Wednesday, April 3, the former vice president shared a video to Twitter promising to "be more mindful" of personal space and "respectful" of boundaries. The next day, however, Trump had shared a parody of the video that showed Biden creeping behind himself and touching himself even as he apologized, inflaming the issue all over again. Elite Daily reached out to the White House for comment on the president's post, but did not hear back by the time of publication. Representatives for Biden did not immediately respond to Elite Daily's request for comment on Trump's post.

Trump, who has faced a trove of misconduct allegations himself, if I may add (though he denies them), captioned the post, "WELCOME BACK JOE!"

For comparison purposes, take a look at the original first:

And then the doctored video:

Biden later responded to Trump on Twitter, writing, "I see that you are on the job and presidential, as always." Elite Daily reached out to the White House for comment on Biden's tweet, but did not hear back by the time of publication.

Since March 29, Biden, who is famously tactile, has faced multiple allegations of inappropriate behavior and unwanted contact. Elite Daily previously reached out to his representatives for comment, but did not hear back. At least seven women have come forward with claims, per USA Today, the first being former Nevada assemblywoman Lucy Flores, who said in a column for The Cut that Biden once sniffed her hair and kissed her on the back of the head during a campaign event in 2014. A representative for Biden said in a statement that he did not recall that incident. The statement reads in part:

Vice President Biden was pleased to support Lucy Flores’ candidacy for Lieutenant Governor of Nevada in 2014 and to speak on her behalf at a well-attended public event. Neither then, nor in the years since, did he or the staff with him at the time have an inkling that Ms. Flores had been at any time uncomfortable, nor do they recall what she describes.

The allegations could be troubling for Biden given that he is reportedly considering a 2020 presidential campaign. Elite Daily previously reached out to representatives for Biden for comment on his presidential plans, but did not hear back.

Posts like Trump's probably aren't helping his potential bid, either. Perhaps the best way to fight this one out is on the debate floor, though, so who knows what will happen.