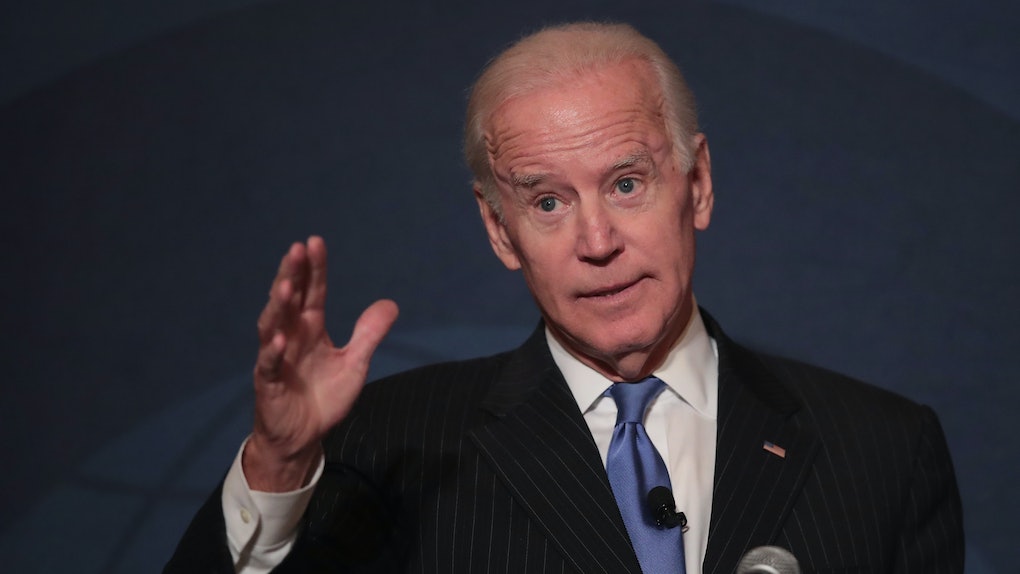 Joe Biden is responding to claims from a former Nevada assemblywoman regarding an alleged incident from five years ago. In an essay for The Cut, Lucy Flores recently described an alleged "awkward" experience she claims she had with the former vice president, saying that in 2014 he allegedly kissed her on the back of her head without consent. It's an allegation that grew so big that Biden quickly weighed in on it. Joe Biden's response to an alleged unwanted kiss in 2014 denies knowledge of it. Elite Daily reached out to Biden's representation for further comment on the claims, but did not hear back at the time of publication.

The kiss, Lucy Flores shared in the story that was published on Friday, March 29, allegedly happened while Biden was campaigning for her in 2014. At the time, she was the Democratic nominee for Nevada’s lieutenant governor. Just before a campaign event, Biden allegedly approached Flores, leaned in, sniffed her hair, and then planted a kiss on the back of her head. Though Flores explained that she is not "suggesting that Biden broke any laws," she said that the moment embarrassed, shocked, and confused her. "Even if his behavior wasn’t violent or sexual, it was demeaning and disrespectful," she wrote. You can read the full story here.

Responding to those claims, a spokesperson for Biden reportedly said that Biden did not recall the alleged incident. According to Slate, the statement reads:

Vice President Biden was pleased to support Lucy Flores’ candidacy for Lieutenant Governor of Nevada in 2014 and to speak on her behalf at a well-attended public event. Neither then, nor in the years since, did he or the staff with him at the time have an inkling that Ms. Flores had been at any time uncomfortable, nor do they recall what she describes. But Vice President Biden believes that Ms. Flores has every right to share her own recollection and reflections, and that it is a change for better in our society that she has the opportunity to do so. He respects Ms. Flores as a strong and independent voice in our politics and wishes her only the best.

Elite Daily reached out to representatives for Biden for any additional comment regarding the claim, but did not immediately receive a reply.

The allegation could be troubling for Biden, as it comes amid wide speculation that he is gearing up to announce a 2020 presidential campaign. Representatives for Biden did not immediately respond to Elite Daily's request for comment on his presidential plans.

It's especially concerning, if you ask me, because it's also yet another alleged instance of Biden's alleged inappropriate behavior. Previously, he reportedly kissed Sen. Chuck Grassley's wife on the lips, and joked to a teenage girl that he hoped her “mom has a big fence around [their] house." He's also been recorded touching a female reporter in a way that has been described as inappropriate, and has this thing where he whispers in women's ears. The list goes on. Elite Daily reached out to representatives for Biden for comments on these moments, but did not hear back by the time of publication. Defenders of Biden have said actions like this are due to him coming of age in a different time, and that's just "Joe being Joe," but this new report from Flores brings up different questions.

As Flores explained in her essay, it's something that needs to be addressed. "The transgressions that society deems minor (or doesn’t even see as transgressions) often feel considerable to the person on the receiving end. That imbalance of power and attention is the whole point — and the whole problem."

So it's good that the floor for conversation is at least open. We'll see where it goes from here.