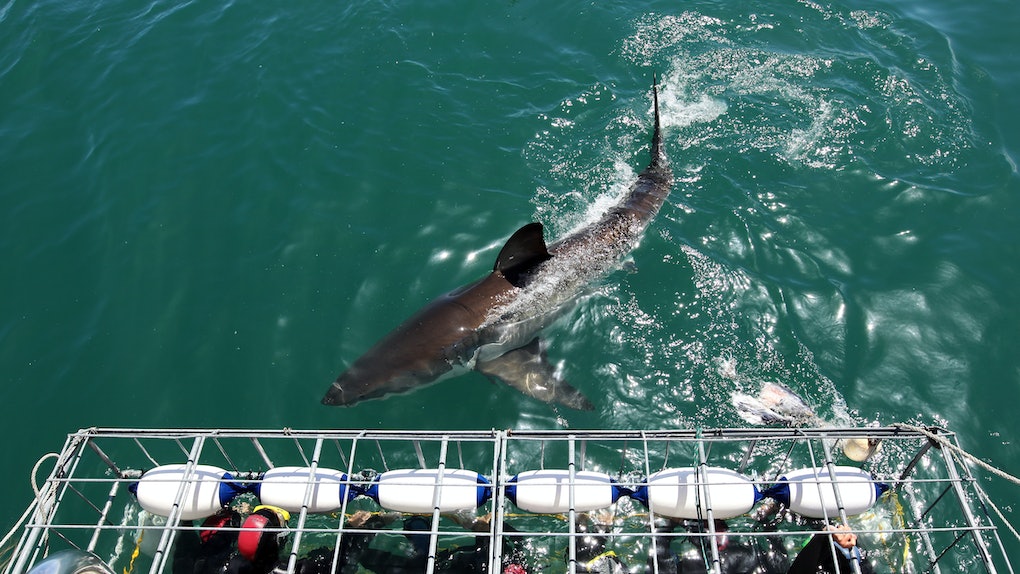 Last weekend, the president and his policies were one of the reasons people around the world gathered to protest en masse. And now, people are donating to save sharks in Donald Trump's name to troll him. Apparently, the president is no fan of the sharp-toothed fish.

The revelation that Trump hates sharks (more specifically, that he's terrified of them and hopes they all die) surfaced on Friday, Jan. 19 after In Touch published a 2011 interview with adult film star Stormy Daniels, with whom Trump allegedly had an affair. (A White House official told The Wall Street Journal that rumors of an affair were "old, recycled reports, which were published and strongly denied prior to the election.")

"He is obsessed with sharks. Terrified of sharks," Daniels reportedly said in the In Touch interview. "He was like, 'I donate to all these charities and I would never donate to any charity that helps sharks. I hope all the sharks die.'" She claimed that Trump's comments came one night while he was watching Shark Week, the annual Discovery Channel special dedicated to them.

It appears Trump meant what he said about donating to charities that help sharks, per Washington Post reporter David Farenthold.

"I checked: the Trump Fdn. gave $0 to any shark-focused charities," wrote Farenthold in a Jan. 19 tweet. "Closest was $10K to Florida Keys Reef Relief, where a Trump friend is on the board."

But Trump's extreme words on the subject couldn't have been better for the marine life community. In response to the comments, MarketWatch reports, sea life conservancy groups that protect sharks have been flooded with donations. Most of them have come from first-time donors, CEO and co-founder of the Atlantic White Shark Conservancy Cynthia Wilgren told the outlet.

"We have been receiving donations in Trump's name since the story was published," Wilgren said. She added that the organization often struggles to get benefactors to protect the animals, as most people are wary of them.

Sea Shepherd Conservation Society Captain Paul Watson told MarketWatch he's had "quite a few" donations in which people have specifically cited Trump's comments as the reason for making their donation.

"Anything that focuses attention on the plight of sharks worldwide is valuable," Watson told MarketWatch. "So I guess in that way the president did good service."

We get it, Shark Week can be a stressful time for all of us. But Trump's hatred of sharks isn't limited to that timeframe.

In fact, it seems to be a years-long thorn in his side. Trump's alleged affair with Stormy Daniels took place in 2006, so presumably, Trump's shark comments came around that time, too. But in a pair of tweets from July 2013 (and this was a month before Shark Week aired that year), the president lashed out at them on Twitter.

In response to the surfacing of Trump's death wish comments, the Discovery Channel had their own words to say on the matter. "Shark Week celebrates the wonder of these majestic creatures and their critical importance to the ecosystem," a Discovery Channel representative told Mashable. "Their safety and conservation is the most important message conveyed throughout the week."

But Trump might have been scared of sharks for far longer than that. Shark Week has been running as a special since 1988, so that's plenty of time for the president to have logged some serious hours watching them. (Given that he reportedly watches up to eight hours of TV per day — yes, while in office — it's highly plausible.)

Trump's comments are, perhaps unsurprisingly, not the only thing that he's personally done to have bearing on the plight of sharks. Per The Washington Post, his frequent trips to Mar-a-Lago, which is a hot spot for sharks, have been interfering with biologists' data collection in the area.

And Trump's policies have made sweeping impacts to the environment, marine life included. His 2018 budget proposals have sought to gut environmental protection programs. For example, he proposed cutting back the U.S. Fish and Wildlife Service by 14 percent (although that seems small, considering he also proposed cutting the Environmental Protection Agency budget by 31 percent).

It's no Women's March, but if there's one glimmer of positivity emanating from Trump's disdain, it's that sharks may finally get the conservation funding he has sought to take away.