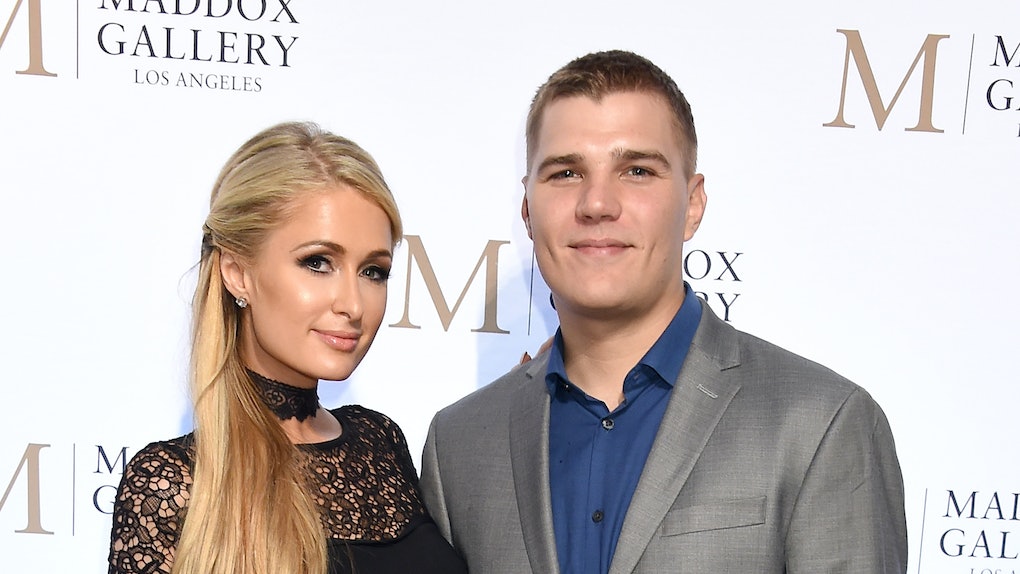 I'm sure you've heard by now that Paris Hilton is officially single again following her split from Chris Zylka last month. But here's a question: Whatever became of that 20-carat, pear-shaped, ice skating rink she was sporting on the fourth finger of her left hand after Zylka proposed with it last January on an Aspen ski slope? Like, can I have it? Please? Looks like that would be a hard "no," since it turns out the former Simple Life star is planning to hold on to that baby! And Paris Hilton's reason for keeping her engagement ring has everything to do with social media. Because it's almost 2019, so of course it does!

OK, so here's the dealio: Hilton rolled up to Jenny McCarthy's Sirius XM radio show on Dec. 19 in order to promote her new documentary American Meme on Netflix, which just happens to be about celebrities and social media, so the whole thing is actually super meta. Anyhoo, while she was on the show, Hilton told the former Singled Out host that she's keeping the massive rock — which is reportedly worth $2 million and took four months to make — because 1) it was free since the jewelry designer gifted it to the couple in exchange for publicity and 2) he apparently made a sh*t-ton of money off of the deal.

"The person who we got it from got millions and millions of dollars of free publicity," Hilton told McCarthy. "I love how social media has basically become a new form of money. It’s pretty sick."

So yeah, Paris Hilton copped a $2 million diamond engagement ring for free, called off her wedding, and now gets to keep the rock. Sounds like a solid hustle to me! Anybody want to pretend to get hitched? What kind of ring do you think my 1,850 Instagram followers will get me?

The question is, is that bad boy even safe with Hilton? I mean, remember when she lost it at a Miami nightclub back in March, after it flew off her finger and landed in a nearby ice bucket? No? Then check out the tweet she sent out about the incident, which also happens to be the most brilliant display of humble-bragging that I've ever seen:

Can't make this stuff up, kids!

Anyway, now that we know Hilton is going to hold onto the ring (or at least try to) I need to know what Zylka did about his tattoo. You know, the one he got of Hilton's name on his arm back in July 2017, because you should always get your significant other's name inked on your body for all of eternity before things are official.

And by always I mean never.

"Such a lucky girl!" Hilton wrote at the time in a since-deleted post on Instagram. "My love surprised me & got my name tattooed in #Disney font. And said cause I'm his most magical place on Earth & he finally found his fairytale princess."

To sum up: Not only did Hilton call off the wedding, but she's keeping the ring, while Zylka's stuck with her name tattooed on his arm in a freaking Disney font.