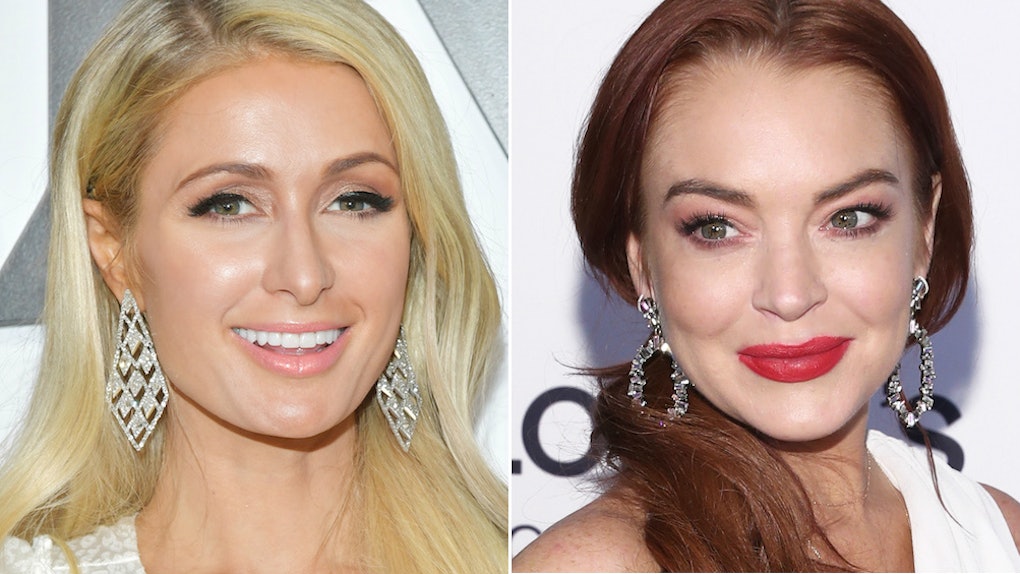 Once upon a time in Hollywood, there was a trio of socialites named Paris Hilton, Lindsay Lohan, and Kim Kardashian. It used to be that Hilton and Lohan were the most famous names of that trio, but oh, how times have changed. Now Kim Kardashian is one of the most famous women on the planet, Paris Hilton is not as A-list as she used to be, and Lindsay Lohan is no longer included in that circle of friends. The Hilton heiress made that pretty darn clear recently (and over the past few years, let's be honest), given Paris Hilton's comments calling Lindsay Lohan "lame" and "embarrassing." Oof, Paris. I thought Lindsay was the one in Mean Girls?

Hilton appeared in an episode of Watch What Happens LIVE with Andy Cohen on Tuesday, May 14. She played a round of "Plead The Fifth," a game Cohen frequently initiates on the show that requires the interviewee to be asked three personal questions. They can plead the fifth on only one of them, meaning if they choose not to answer the first question, it doesn't matter how much more intense the following two are. Ya gotta answer! It frequently stirs up a little drama, but Hilton had no qualms stirring up the drama herself during this segment.

"Paris, you've recently said that you never want Lindsay Lohan's name spoken in the same sentence as yours. Paris, say three nice things about Lindsay Lohan," Cohen prompted Hilton. Hilton had a painful look on her face, clearly struggling with what to say.

"Lame and embarrassing," she said, apparently not being able to find anything nice to say. Damn, girl! That's rough. Cohen quickly moved on to the next question.

You can watch the full moment here.

"You and Kim Kardashian have had a long history together, but Kim mentioned to Harper's Bazaar in 2011 that you two weren't speaking," Cohen asked next, hoping Hilton would talk about the part of the trio that she's still close with. "What was the cause of that rift, and was it really because you insulted her butt on a radio show?"

"I think it was the media just making something up," Hilton responded, "but I just did a video called 'My Best Friend's A**' and had the most infamous a** in the world in the video, and her a** is hot. I love it," she said. Much nicer words were had here, clearly.

The last question was whether or not the rumors were true that Hilton once made out with Miley Cyrus on the dance floor of a nightclub in Miami (!!). Hilton decided not to plead the fifth at all and bashfully said, "Maybe."

While that Cyrus admission is everything, I'm still reeling over the words Hilton had to say about the other former Disney darling. I mean, poor Lindsay! It's all well and fine that these two aren't on good terms anymore, but Hilton is just continuing the drama unnecessarily, in my opinion, by calling Lohan "lame and embarrassing."

Lohan isn't free of throwing shade unnecessarily, however. When Zendaya (another former Disney Channel darling) arrived at the Met Gala on Monday, May 6, dressed as Cinderella, Lohan decided to shade Zendaya, saying her look wasn't as good as Claire Danes' Zac Posen gown from a few years ago.

Zendaya posted this video that showed the magic of her dress lighting up on the Met Gala red carpet to her Instagram.

"@Clairedanes You wore this dress so beautifully," Lohan added in a second comment. "I don't know why someone thinks that they can be more chic. Ever."

Girl, Zendaya and Claire Danes can wear whatever they want. I'm sure they both loved each other's looks. Stirring up drama where there doesn't need to be, just like Hilton. Oy vey.