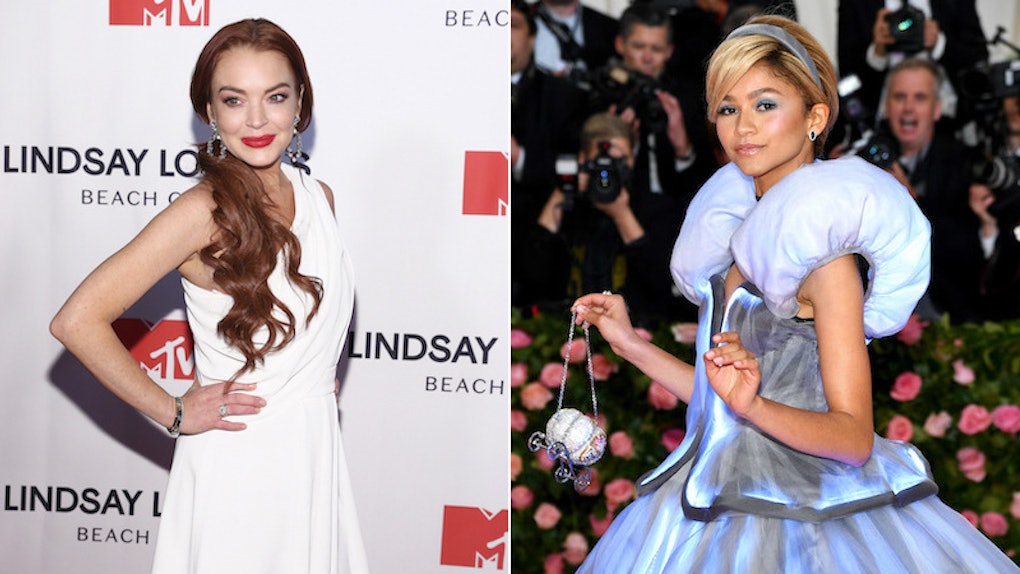 Last year it was Nicki Minaj and Cardi B. This year, it was Lindsay Lohan and Zendaya. I guess a Met Ball wouldn't be a Met Ball without a little drama between stars. And a certain red-headed actress-turned-reality TV star certainly didn't disappoint (even if it's a bit one-sided drama this time around). She rolled up to Instagram after the big event to drop some pretty nasty remarks about The Greatest Showman actress' outfit (which was objectively stunning, btw). Lindsay Lohan's comments shading Zendaya's Met Gala Cinderella dress is total Mean Girl behavior, you guys, so raise your hand if you feel personally victimized, because I know I do.

In case you missed it, Zendaya wore a Tommy Hilfiger dress to the Met Gala on May 7 that changed color using technology hidden beneath the skirt. And yes, it was as cool as it sounds. The actress rolled up to New York's Metropolitan Museum of Art in the full-length, puffy-sleeved gown modeled on the one worn by the Disney princess. And when she hit the entrance to the party, her stylist, Law Roach, waved a smoke-emitting wand and the dress slowly transformed from pale gray to a bright and glowing shade of blue.

Zendaya posted a video of the epic moment on Instagram, so here you go:

So major! But evidently, Lohan — who, BTW, was not invited to the event this year and hasn't been in attendance since 2007 — wasn't here for it. And after a Disney fan account posted a side-by-side collage of Zendaya and Cinderella, Lohan hit up the comments to go in on the look.

"Claire Danes did that with Zac Posen already," she wrote, in an apparent reference to the light-up gown Danes wore to the Manus x Machina: Fashion in an Age of Technology-themed event back in 2016. "@Clairedanes You wore this dress so beautifully, I don't know why someone thinks that they can be more chic. Ever."

But for comparison's sake, here's a picture of Danes at the Met Gala in 2016:

Well, they're both light blue ball gowns, I guess....?

Anyway, it wasn’t long before Zendaya’s fans jumped in to defend her. Like Kailah Casillas, who Lindsay fired on her reality show. "Lindsay Lohan is the biggest hater," she wrote. "Especially towards beautiful women."

"Seriously?" added another commenter. "Remind me, was #theparenttrap and #freakyfriday movies you did the original? Or did you remake something someone already did???? @zendaya and @clairedanes both looked great!"

"Show us the dress you wore to the #metgala go ahead, I’ll wait," wrote a third. "Go sit down somewhere."

And from a fourth: "So what did you wear to the met gala? Oh yeah, you weren't invited."

Seriously, Lindsay, why you gotta be so rude? Almost every piece of clothing at the Met Gala this year was inspired by someone or something else. Kim Kardashian's "sexy wet look" was a nod to Raquel Welch (just check out this video). And Billy Porter's iconic entrance was an ode to Miss Diana Ross.

So go on with your bad self, Zendaya, because I think you looked so f.... abulous.

You thought I was gonna say fetch, didn't you?

More like this
I Tried Singing While Running Like Miley Cyrus & OMG, My Lungs
By Rachel Varina
Which Album Will Taylor Swift Re-Release Next? Her Hints Have Fans Shaking
By Brandy Robidoux
Princess Eugenie's Instagram Tribute To Prince Philip Recounts Their Sweet Bond
By Brandy Robidoux
Stay up to date